Trevor Brennan is a very large man so it stands to reason that any offspring he might have would also be very large. Well, it turns out his son Daniel has gotten his dad's genes and then some. First, see these tweets and be shocked at this 14 year old's size.

He's playing for one of Toulouse's youth teams and when asked if he would play for France says: "Why not, after all?" #Brennan — Murray Kinsella (@Murray_Kinsella) May 24, 2013

He continues: "In a year, I'll be bigger than my dad. And he always told me never to set my limits!" #TrevorBrennansSonIsaBeast — Murray Kinsella (@Murray_Kinsella) May 24, 2013

Here's a pic of the article about Brennan's son, entitled 'The Green Giant'. 121kg at the age of 14, hard to argue! twitter.com/Murray_Kinsell…

And if you think that maybe his 121kg isn't muscle, this photo seems to debunk that theory.

That photo was taken near ten months ago, so he was somehow lifting Trevor Brennan around the age of 13. And it's not as if Trevor Brennan is a sack of flour. Also, it seems that Dan Brennan had this physique from a very young age. This is from Trevor Brennan's ERC diary in 2005.

The next day Daniel had his first judo championships in the village next to us, St Alban. Myself, Paula and Josh went along to it and it was great to see all the different teams of kids and how professionally it was run. Danny is only six-and-a-half but because of his size he was put in with nine and ten-year-olds. He's tall for his age, and weighs 55kgs. A future Irish prop. "I'm the second Califano," he says.

He had to compete with one eye closed because he had been fighting with the brother a few days before and still had washing up liquid in his eye. But he won a gold and a bronze. Not bad for his first competition.

Although is this all this an elaborate smokescreen? He certainly doesn't look that big in this picture from 2000 as Trevor captained St. Mary's to win the AIB League. 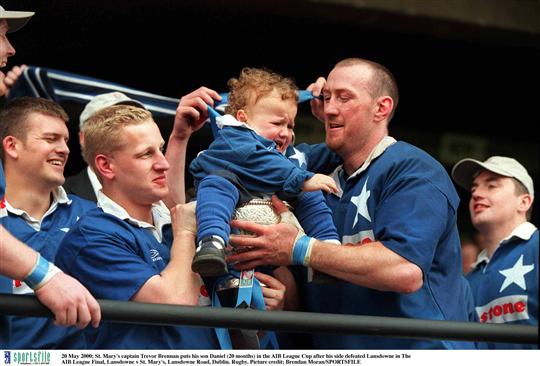