In Armando Iannucci's comedy 'The Thick Of It', the veteran Tory MP, Peter Mannion asked his handlers, 'Have you ever googled your own name? It's like walking into a room where everyone tells you how shit you are.'

Regrettably, those responsible for TV3's rugby coverage will find themselves in the same self-esteem draining environment should they be so unwise as to type the phrase 'TV3 commentary' into twitter's search box.

Yes, the internet is now well renowned for being an unforgiving place.

Some folk are universally adored (Jeremy Corbyn, Edward Snowden) and regularly receive the kind of praise that might make the leader of North Korea blush.

Many others habitually receive cascades of abuse and nothing but (John Waters, RTE presenters, politicians from centrist parties) to the point where gentler souls might be inclined to fear for their mental health.

TV3's rugby output is currently getting it both barrels from the social media fraternity.

George Hook won some internet points at the weekend for saying he was going to turn down TV3's commentary as soon as kick off begins and choose that moment to honour the majesty of Elvis Presley instead. 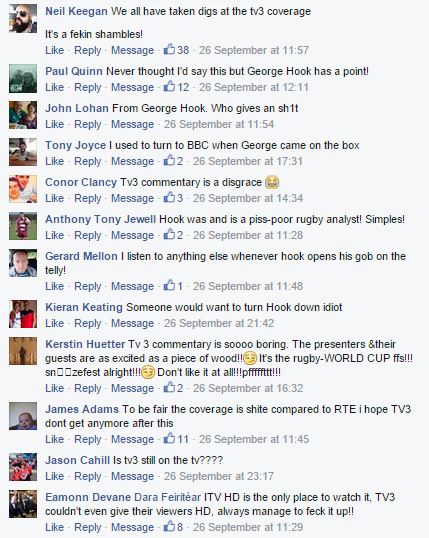 Most were in solid agreement with Hook, expressing their disdain towards the TV3 boys in a somewhat less subtle manner.

There were a few dissenting voices, but they focused more on the 'George Hook is a bollocks' angle rather than the 'TV3's coverage is perfectly okay' angle.

#IREvROM TV3 commentary is pure crap, they never say who is coming on or off, and talk pure shite when there is action happening. #TV3Rugby

Tv3 commentary what crap no feeling to it #TV3Rugby #RugbyWorldCup

Are tv3 pulling the urine with the commentary. He belongs at a golf tournament not rugby!! #RugbyWorldCup #TV3Rugby #zzzzzzzzz

TV3 seems to be suffering as a result of social media's hatred of anything 'new' or different from the norm.

Interestingly, this is what Ryle Nugent, the displaced voice of Irish rugby, was talking about when he explained why John Giles had been dropped from the RTE panel for the Scotland game in favour of Richie Sadlier. He said he was attempting to introduce 'gradual change' on the panel so that by the time the three amigos moved on, viewers weren't looking at three entirely new faces.

My job is to make sure that we are planned for the future. I also firmly believe that the audience, subconsciously, doesn't like change... All the research would show it's (better to have) gradual rather than absolute change.

If you look at what we've done with our rugby coverage. It was George Hook, Tom McGurk, Brent Pope and Conor O'Shea. And over the last two years, we've introduced Ronan O'Gara, Shane Horgan and Beranrd Jackman. And these guys have become familiar, comfortable.

For what it's worth, and obviously it's not worth much, this writer's opinion is that TV3's commentary and coverage is entirely adequate. In fact, I would go as far as to say it's fine.

There are a couple of annoyances. Naturally the commercial breaks are fairly lengthy (but then TV3 isn't exactly getting a big wodge of the licence fee money now, is it?) and Liam Toland's use of the phrase 'last minute dot.com' during the England-Wales game was massively controversial. But there are also big plus points, notably Matt Williams's analysis.

There is the odd positive comment online. But, in the main, it's been drowned out by incessant negativity.

Meanwhile, the lads over in RTE probably never realised to extent to which they were loved.

The only way TV3's coverage will generate much in the way of positive comment is if UTV Ireland win the rights to the next Rugby World Cup.

Rugby
2 years ago
By Maurice Brosnan
Joe Schmidt Addresses Infamous George Hook Criticism
Rugby
6 years ago
By PJ Browne
George Hook Gave A Powerful Response On The Late Late Show To Recent Johnny Sexton Comments
Rugby
6 years ago
By PJ Browne
George Hook Is Threatening To Sue Johnny Sexton
Popular on Balls
Football
3 hours ago
By Eoin Harrington
Juan Mata Questions Manchester United Management After Dire Season
Golf
2 days ago
By Gary Connaughton
Padraig Harrington Glad He Didn't Have To 'Make A Decision' On Saudi Golf League
Football
1 day ago
By Gary Connaughton
The Frank Lampard Love-In After Everton's Survival Was Downright Bizarre
GAA
2 days ago
By PJ Browne
'It Came At An Awkward Time. I Didn't Think It Would Be So Bad'