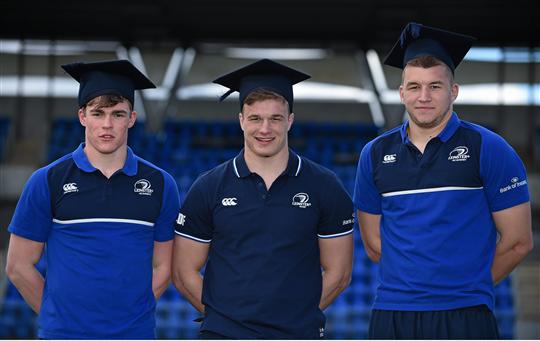 There are tough places to go in sport.

The Sportsground in Galway has undoubtedly entered that list. Seven of Connacht's 13 PRO12 wins this season have come at home.

On Saturday evening, a young Leinster side experienced the wind whipping in from Galway Bay. It's not just the conditions which make the home of Connacht Rugby intimidating, it's also the atmosphere.

Two of Leinster's most exciting prospects - Garry Ringrose and Ross Molony - started Leinster's 7-6 loss to Connacht at the weekend. The centre, hailed by many as the long-term successor to Brian O'Driscoll for province and country, described the Sportsground as 'amazing'.

It was unbelievable. For not the biggest ground, it was incredibly loud. It was amazing to be there and play in a derby like that. It was an incredible atmosphere.

The weekend's game was a completely new experience for Molony.

It was definitely something I hadn't really experienced before. It was my first time playing in the Sportsground. They really get behind their team and build energy for Connacht to play well on the back of it. It was something different but quite enjoyable at the same time.

While they ground out the win on Saturday; exciting, expansive, offloading rugby has also been a factor in Connacht's success this season. This is something which second row Molony has recognised.

Pat Lam has them playing some really good rugby; some really good shapes. They get the ball into the middle to of the pitch and they have options both sides. Even there at the weekend, defending is tough work. You really have to work hard. Unfortunately, we couldn't get the win down there. They're playing great, top of the table and having a great season so far.

Connacht are currently top of the PRO12, four points clear of Leinster. Their remarkable season has been less of a surprise for Garry Ringrose than other rugby watchers.

It was an incredibly tough challenge, the conditions played a huge part with that wind. All credit to them, they held out and kept us tryless. I think they were deserved winners, considering the shift they put in. Looking back on it, they proved the stronger team in the end.

They've been incredible this year. It wouldn't have been as much of a surprise to me as it was to everyone else. They've got such a strong squad and a deep squad. They've had a lot of injuries as well but are still getting win after win. Given the squad that they have and the coach that they have, it's certainly not a surprise where they are.

The injury troubles of which Ringrose speaks were further exacerbated at the weekend with the loss of another out-half, AJ MacGinty, for four weeks. MacGinty, along with Jack Carty and Craig Ronaldson, is the third Connacht number 10 to succumb to injury in recent weeks - certainly a major blow at this crucial period of the season.

Another loss which Connacht will have to deal with in the future is Robbie Henshaw. The 22-year-old moves to Leinster next season.

It'll be incredible to get him here. Unfortunately, Ben Te'o is leaving. To get Robbie into the squad will be a huge addition. There's nothing better than getting that competitive edge in the centre and in the squad in general. I think it'll do nothing but good for the club.

In late January, after the naming of the Ireland squad for the opening two games of the Six Nations, Joe Schmidt divulged that Brian O'Driscoll had sent him a text message regarding the progress of Ringrose.

The 21-year-old does not let such endorsements disturb his focus.

My grandparents enjoy getting the newspaper clippings and stuff, I kind of leave it to them.

To be honest, I try my hardest to focus on what's important at the moment. That would be paying attention to the Leinster coaches and the senior players in the squad and trying to improve as much as possible and keep that progression going, if possible. That'd be at the forefront of my priorities anyway, and I'd try to keep it that way.

Garry Ringrose and Ross Molony were speaking at the launch of the 2016 Bank of Ireland Leinster School of Excellence.

For further information and to book a place go to: http://www.leinsterrugby.ie/soe