We here at Balls.ie have been reading "Matt Dawson's Lion Tales: Epic Yarns From 125 Years Of Rugby Folklore" so you don't have to.

One of the book's anecdotes that jumped out at us involved Donncha O'Callaghan, spin doctor extraordinaire Alastair Campbell and some Burnley branded underwear. We will allow the loquacious Dawson to explain further, as Donncha brought some light relief to an otherwise moribund 2005 tour of New Zealand:

There are lighter moments along the way, such as the day Alastair Campbell has his trousers yanked down from behind by Donncha O'Callaghan. In his moment of embarrassment, as he reaches to cover up his Burnley FC boxer shorts, he does not notice his mobile phone drop out of his pocket.

Steve Thompson, the England hooker and my old Northampton team mate, does, and later we attempt to send love messages to Tony Blair. We scroll down his list of stored names but none is listed as Tony Blair or PM, Boss or even Gaffer. So we give it the carpet-bombing treatment.

His entire address book gets an 'I love you' message.

I know it is infantile but how often do you get the chance like that?

Dawson does not know whether or not this 'carpet-bombing' campaign worked. Before we go any further, it is necessary to point out the irony of Dawson using the phrase 'bombing' in a story relating to Tony Blair and a plan's failure to achieve its intended goals.

But we digress. Dawson has attributed the responsibility of this to O'Callaghan, but it appears that he may have accused the wrong Munster and Ireland second-row.

Writing about the story four years later on his website, Campbell remembers it differently, instead accusing Paul O'Connell of pulling down his trousers. For the purposes of clarity, Campbell refers to the phenomenon of trouser-pulling as "debagging". Campell headlined the article 'The Day Lions Skipper Paul O'Connell Took My Trousers Down, and here are the relevant passages:

I thought that might grab some attention as Mr O’C prepares to lead out the Lions in South Africa.

We had just unveiled the full squad to the world’s media in our Auckland hotel. Organising 44 grown men, with an awful lot of energy in them, to sit in the right place and do and say the right thing, was no mean feat, but we just about did it. It went according to plan. Head coach Clive Woodward and his top table panel fielded all the questions well. It was a good event.

So out we trooped … and as we did so suddenly I was aware of large hands fumbling around my backside and waistline. Then I was aware of loud laughter, and large men scattering in different directions, before seconds later being aware that my Lions tracksuit bottoms were down by my ankles.

How lucky am I that of the dozens of cameramen hanging around, none were quick enough to capture the moment before I managed to pull them back up?

I joined in the laughter, because you cannot take yourself too seriously with a bunch of rugby players. But then moments later, I realised there was an altogether more worrying problem. My blackberry had gone AWOL.

Now this was not long after the 2005 election for which I had returned to help TB for six months prior to joining the Lions. But we were still in touch, and there were some pretty sensitive messages and documents on there. But of course nobody would admit to having it.

I don’t mind admitting … I was in a panic. Eventually I had to plead with the security guys to put the fear of God into the players that if they did not hand it over pretty quickly, the chances are they would not be facing the All Blacks, but men in black from the security services charging into their bedrooms at night to retrieve my blackberry.

Eventually, the truth emerged. O’Connell had debagged. Hooker Steve Thompson had made off with the blackberry. To date, there is no evidence they have used any of the information that was on the blackberry. As Matt Dawson assured me at the time, they probably didn’t know how to work it. But I have learned this … if ever you’re wearing a tracksuit, tie the lace at the top of the trousers, very tightly indeed.

Again, there are a couple of things we have to immediately point out. The first is the nicknaming of Tony Blair as TB, otherwise known as a potentially fatal infectious disease causing severe weight loss, night sweats and chronic coughing with blood-tinged sputum. You can finish the punchline yourself from here.

The second is his nicknaming O'Connell as 'Mr. O'C'. We will allow the good people at Arrested Development express our views on this:

Again, we digress. O'Callaghan confirmed that O'Connell was the man behind the stunt in an interview with Rugby World a year later:

That was Paul O’Connell but I get the blame for it because I’ve got the rep. Campbell deserves everything he gets, he’s a joke shop! We didn’t know him that well over here before the tour – in Cork he’s not big news – and we wanted to make him feel part of the squad.

Thus concludes our investigation: it seems Paul O'Connell was the culprit all along.

Despite O'Conell getting the gory glory with this alleged anti-Tory, O'Callaghan has retained a relationship with Campbell. The following story appears on the latter's blog:

As for Donncha, if you have heard me doing after dinner speeches, he is a regular feature, particularly the story of when he followed me into the gents’ with a TV camera, filmed me having a pee, demanding to know whether I washed my hands after the event, filming me doing so, then asked me if Tony Blair washed his hands after he had a pee.

When I said he did, back came the reply ‘No he does not – because that was your job!

Along with that, O'Callaghan has since co-opted Campbell to broadcast some pro-John Hayes propaganda on the Late Late Show:

So how exactly did Dawson believe it to be O'Callaghan behind the 'debagging' stunt? Perhaps he just cannot imagine a rugby story involving exposed underwear without immediately thinking of O'Callaghan: 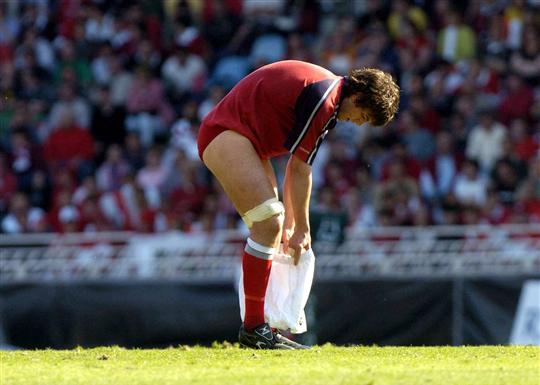