Friday night's PRO14 clash between Munster and Edinburgh produced, to date, the strangest moment of the season, but Munster coach Johann van Graan was unhappy with the actions of Edinburgh players after the game.

While defending their own line, the Edinburgh players lifted the protective padding around the goalposts in a bid to stop a Munster try. According to the World Rugby rule book, a try is scored "when an attacking player is first to ground the ball in the opponents’ in-goal, against the opponents’ goalpost or its surrounding padding," and as Pierre Schoeman appeared to deprive Munster of the opportunity to score against the padding Jack O'Donoghue, Munster's captain, suggested to referee Marius Mitrea that the actions were "unsporting." 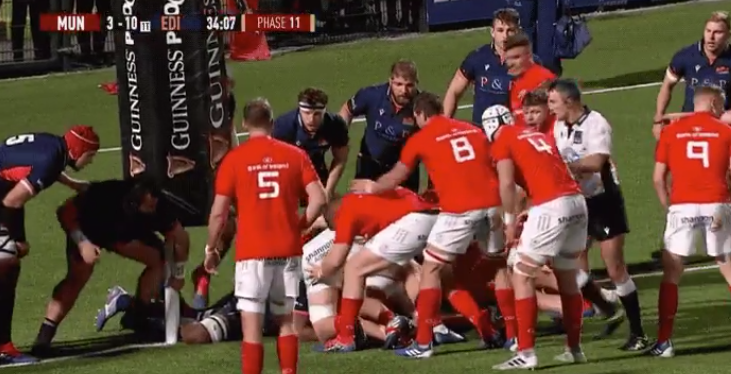 After the game, van Graan claimed that he was "really frustrated" with the incident given it could also have led to serious injury had a player clashed with the frame of the goalposts.

In my view you can’t touch the goalposts. It is the safety of the game, you pull that up. There’s been another incident in world rugby - that was a yellow and a straight penalty try.

We have got to keep with the values of the game. I’m not going to comment further on it but safety is paramount.

Schoeman went unpunished during the game as Edinburgh went on to inflict an 18-16 defeat on Munster, their first at Irish Independent Park in Cork in almost two years.

Munster must now face European champions Saracens at Thomand Park this Saturday, before travelling to Allianz Park the following Saturday, December 14, for the return fixture.