"I'm sure you're going to keep fighting on, which I am doing too. And I think that's a bond that we will always have."

The true sporting icons are athletes that transcend their chosen profession, or any game. The greats - think Ali, think Pele, think Narvatilova and Babe Ruth - become more than sport; they ingrain themselves within society as a deeper cultural presence.

12,000 kilometres west of New Zealand, there remains folk to whom the noun 'Lomu' translates as both 'the legendary Kiwi 11' and, simply, 'something massive'.

The magnitude of the Jonah Lomu legend can perhaps be best measured by the notion that these South African rugby fans still bluster about the fact that the great man never crossed the whitewash in 13 appearances against the Springboks - the only opposing outfit, along with Wales, whose defence was never decimated by the flying bulldozer from Auckland.

Last year, just months before his untimely passing, the 37-try former All Black returned to the Rainbow Nation to reconvene with the man who, in effect, conceived that very record; former Bok scrum-half Joost van der Westhuizen, whose famous stifling of Lomu has oft been pinpointed as the inspirational 'oomf' behind the host country's historical triumph at the 1995 Rugby World Cup final.

Lomu was filming his Back to South Africa film - a return to the scene of the crime, so it were, with New Zealand's 15-12 defeat to their old rivals 20 years prior perceived by the Kiwi public to be but the first choke of many on world rugby's grandest stage. Good things come, they say...

You have beautiful kids,

Lomu tells his old adversary-turned-pal, before introducing himself to the mini Van Der Westhuizens.

Hello, my name is Jonah. Really nice to meet you.

And it's not until the former Springbok record cap holder's youngsters see a picture of Daddy grappling a giant that they realise who they've just been introduced to.

It's Lomu's words to their father, however, which depict what a truly colossal man he was off the pitch.

The 44-year-old Van Der Westhuizen was diagnosed with motor neuron disease in 2011, having first encountered a 'weakness' in his right arm as far back as 2008. Four years removed from being handed a two-year life sentence by his doctors, the former Bulls half-back sits in a wheelchair, unable to speak clearly, staring fondly at the fellow rugby legend he hauled down outside his own 22-metre line en route to lifting the Webb Ellis Cup two decades prior.

And yet, in true Jonah fashion, it's Lomu - having himself being warned that he faced a wheelchair-bound future before a life-saving kidney transplant in 2004 - who seems the more awe-stricken of the pair, dazzled by the battling spirit displayed by his former conqueror:

During the early summer of 2003, the NZRU shocked the rugby world when they revealed that Lomu was undergoing dialysis three times per week due to a deterioration in his renal function.

The nuclear winger had first felt the symptoms of nephrotic syndrome before the 1995 Rugby World Cup.

Despite being bedridden for days at a time between games from the age of 20 onwards, his illness (at the time undiagnosed) and its subsequent effects on both his career and personal life had remained secret for the bones of a decade.

That All Black spirit.

On this day last year, Lomu passed away unexpectedly, aged 40, after a personal battle which spanned two decades - a battle which itself, for 15 of those years, succumbed to one of the most remarkable rugby careers the world will ever know. He changed the game; the primal physicality, the blistering speed, the elegant violence, the tries that evoked no words, just noise. The comeback.

After his death last year, his old friend paid tribute to the great man with the following message:

Difficult to write with eyes full of tears on my eye tracker. Thank you for EVERYTHING Jonah. RIP my dear friend!

And so the rest of the world bid farewell to rugby's first real-life superhero. But Jonah Lomu's legend, by its very definition, dictates that his spirit will always hold him in steadfast in All Black culture, world rugby and beyond. A true sporting Gargantua, forever fondly etched in our memories. Forever 11. 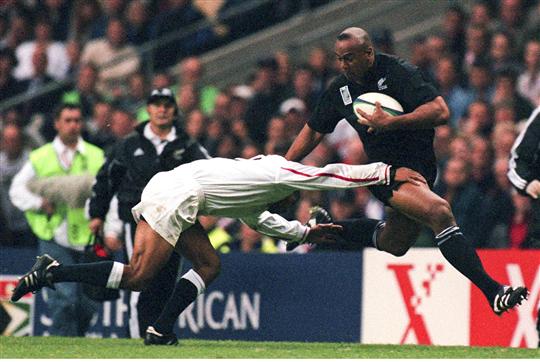 Read: Neil Francis On The Time Jonah Lomu Announced Himself To The World Against Ireland