"The lifestyle was unbelievable. Fabulous weather, you'd go training in the morning early and be finished by lunchtime. Off to the beach then for the afternoon."

European club rugby is packed with gilded imports from the southern hemisphere. The majority are entering the twilight of their career having achieved all they wanted in their native countries. They're keen to make a few bob before they make the move into the punditry/after-dinner speaking circuit wholesale. Their natural habitat is the south of France, playing under the care of an eccentric, outspoken loadzamoney owner with a generous wallet.

But very few players have gone the other way.

Danny Ciprani sought refuge from the English press by going down to Australia for a couple of years to play for the Melbourne Rebels. Freddie Michalak had two separate spells with the Natal Sharks.

Irish internationals Isaac Boss and Tom Court played for the Waikato Chiefs and the Queensland Reds respectively but that was before either of them arrived in Ireland.

Neil Francis did play for top Australian club Manly in the late 80s (alongside Clive Woodward - then in the twilight of his career) but that was in the pre-Super Rugby era. Franno once told a somewhat disbelieving Matt Cooper on TV that he had rescued his Manly career after a stuttering start by scoring four tries in a single match (video here).

Ulster's Ruadhri Murphy spent two seasons with the Brumbies between 2012 and 2014 but has to earn a senior international cap. Shane Jennings trained with the ACT Brumbies while suspended during their pre-season in late 2009.

Flanker Keith Gleeson was born in Dublin and played for the Waratahs in the late 90s and early 2000s, but he had grown up in Sydney and had been an Australian U21 captain. He only switched his allegiance back to Ireland shortly after signing for Leinster in 2001.

Only one other Irish-born international has played Super Rugby.

Future Australian coach John Connolly had first been impressed by Peter Clohessy on Ireland's tour of Australia in 1994. The 'last great amateur tour' was both a punishing and illuminating experience for an Irish rugby team who had fallen way behind the pack in the early 1990s.

But Clohessy had performed very well in Ireland's 26-26 draw with Queensland - the best performance of the tour - and then finished off a fantastic team try in the second test in Sydney, a match which finished in a respectable 32-18 loss against the world champions.

During the Australian off-season, Connolly came north and coached Old Belvedere in the AIL for a season. It was then he approached Clohessy about the prospect of heading to the Southern hemisphere.

Rugby-wise, it was a barren summer for Clohessy. He was slap bang in the middle of a whopping eight month playing ban.

He had been vilified after stamping on the head of France's monstrous second row Olivier Roumat during Ireland's 45-10 defeat in the Parc de Princes in the '96 Five Nations. The slow motion replays were played ad nauseam after the match and on sports news reports in the subsequent days.

It's a recurring theme of nostalgic after-dinner events that the French pack were scary bastards back in those days. Speaking to Tom English in No Borders, the Claw described their modus operandi eloquently.

I never liked them. On the field they'd be gouging, punching and catching you by the stones. If there's anything worse than having some fucker sticking his finger in your eye, it's having his buddy trying to rip the bollocks off you at the same time...

The match was over and no one took any notice of it as we were coming off the field. It was actually Neil Francis who was reporting on the match, who said it to me. 'I think you're in a bit of trouble.' I said, 'Why, what happened? I had forgotten about it. He explained that it had been replayed all the time on TV. I kind of leaned on his head with my boot. I actually pulled out of it when I was doing it as I realised I was doing it.

That was due to expire at the end of November. But on 17 September 1996, he agreed to sign a five month contract with Queensland, commencing when the season kicked off the following January.

That year saw a mass exodus of Irish players to England, to clubs like London Irish, Saracens and Moseley. The expectation was more would follow. This confirmed the IRFU's worst fears about professionalism, to which they were fanatically opposed right up until the death.

The Heineken Cup officially started the previous season but neither Munster or Leinster had really gotten off the ground as far as the public imagination was concerned. They wouldn't attract mass support until the turn of the century.

There was also confusion about their exact standing. By 1996, they were a weird hybrid of a club side (what they essentially became) and a representative side who played infrequently (what they had been during the amateur era). As if to illustrate this, English clubs didn't participate in the first Heineken Cup and many Irish players based over there returned home to play European Cup games for the provinces. Conor O'Shea and Paul Wallace returned from London Irish and Saracens respectively to play for Leinster in the inaugural Heineken Cup season.

Clohessy was part of the general exodus, albeit he was going to a somewhat more exotic location than Moseley. He also didn't envision staying longer than a season. He was involved in a courier business at the time with a friend of his and he looked after it while he was gone.

The money was decent too?

This was in a different league to anything on offer in the Northern hemisphere at the time. When the IRFU awarded the first batch of full-time contracts before the 1997-98 season, the returning Clohessy was awarded a top contract. Even at that, it was substantially less than what he was getting in Queensland.

The lifestyle was particularly appealing.

It's a fabulous country. The weather makes it and they are easy going. The lifestyle was unbelievable. Fabulous weather, you'd go training in the morning early and be finished by lunchtime. Off to the beach for the afternoon.

While the Heineken Cup was in it's infancy, Super Rugby was in full swing by 1997. Crowds swelled massively and the games were hotly contested.

The Queensland team he joined were a phenomenal side on paper.

They'd great names then, like. They had the likes of John Eales - John Eales was another fuckin' Paul O'Connell, you know. At the time he was taking the conversions and penalty kicks - they had (Michael) Foley, the hooker, Garrick Morgan, Toutai Kefu, Dan Crowley, the other prop, the 'Bomber' Wilson, the Australian wing forward.

The backs then they had Jason Little and Tim Horan. I'd say most of the team would have played for the Australian side, either then or afterwards. 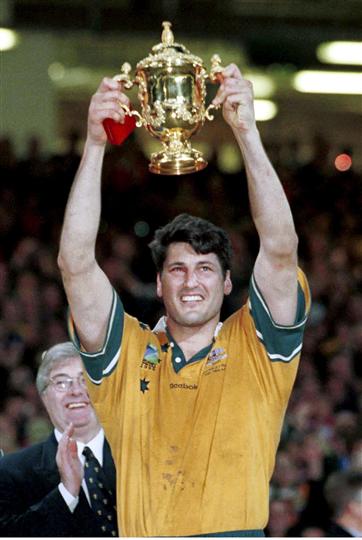 They had won what was then the Super 10 competition in 1994 and 95, and topped the regular league standings of the expanded Super 12s in 1996 - though they were beaten by the Natal Sharks in the semi-finals.

However, they endured a miserable 1997 season. Without key figures Little and Wilson, they lost the opening five matches and slumped to 10th position in the standings.

We were supposed to be (the best of the Australian clubs). We didn't have a great season now in fairness (laughs). We did beat New South Wales, that would have been the local derby at the time.

The competition was eventually won, for the second year in succession, by the Auckland Blues, coached by one Graham Henry. They defeated the newly formed Australian 'reject' side, the ACT Brumbies 23 - 7 in the final in Eden Park.

Clohessy's season was cut short, partly by injury and partly due to his selection for the 1997 Lions team. He flew back in early May, a week before the Lions were to jet off to South Africa.

In spite of the poor results, Clohessy impressed at tight head and his coach Connolly cited his performance against legendary South African prop Os du Randt in the Reds' 35-24 defeat to the Orange Free State (the Cheetahs) as proof that he could prosper for the Lions.

However, he couldn't shake off an injury sustained in a training session prior to the New South Wales match and was forced to pull out. He was replaced by Paul Wallace, who famously went on to claim a starting test spot at the expense of Jason Leonard.

At the same time, I was looking forward to coming home as well. I suppose in that way, I wasn't too upset about not getting on the Lions tour, because I was getting to go home as well. I'd be a bit of a homebird. I went back playing for Young Munster. And Munster started taking off then...

It's this last detail that accounts for the fact that so few Irish internationals have been back since.

Rugby
5 years ago
By Gavan Casey
Maori All Blacks Coach Comically Recalls Last Visit To Thomond Park As A Player
Rugby
6 years ago
By Conor Neville
'They'd Be Gouging, Punching And Catching You By The Stones' - Claw On France
Previous Next

Rugby
5 years ago
By Gavin Cooney
Nigel Owens Names Munster Legend As The Funniest Player He has Refereed
Rugby
5 years ago
By Gavan Casey
Maori All Blacks Coach Comically Recalls Last Visit To Thomond Park As A Player
Rugby
6 years ago
By Conor Neville
'They'd Be Gouging, Punching And Catching You By The Stones' - Claw On France
Popular on Balls
GAA
3 days ago
By PJ Browne
Cusack Has Little Sympathy For Gearoid Hegarty After Red Card
Football
12 hours ago
By PJ Browne
Man Arrested For Headbutting Billy Sharp After Playoff Semi-Final
GAA
1 day ago
By PJ Browne
GAA President Explains Why Tailteann Cup Won't Be All-Ireland Curtain Raiser
Football
4 days ago
By Eoin Harrington
Alan Shearer Says Roy Keane "Ran Away" From Him After Famous Clash