Where To Watch Ireland Vs Japan? TV Details For Saturday's Summer Test 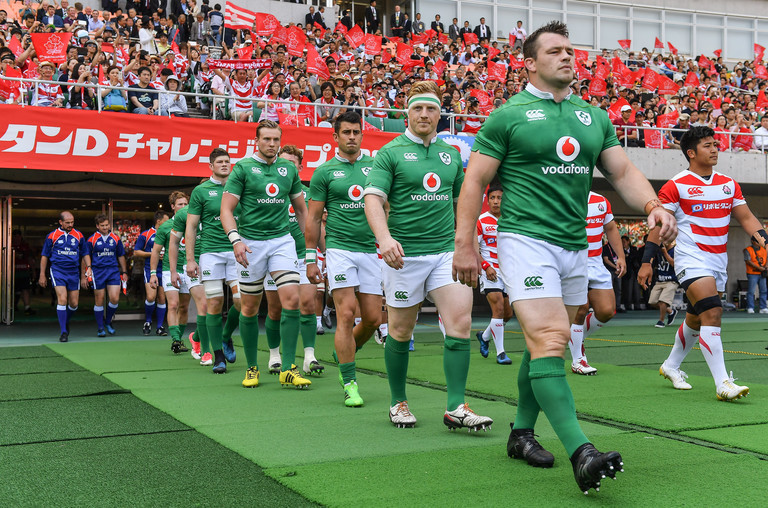 Where to watch Ireland vs Japan? If you're wondering where you can watch the match this Saturday, read on, we have all the TV details here!

Following on from last weekend's 50-22, Joe Schmidt's side will take on the Japanese again this weekend. The second match will take place on Saturday at the Ajinomoto Stadium.

Where to watch Ireland vs Japan?

The match will be shown live in Eir Sport 2, Sky Channel 424 this Saturday,

What time is kick-off for Ireland v Japan?

What is the Ireland team to play Japan?

There have been a six changes made to the team by Schmidt from the team who faced Japan last weekend.

In the forwards, Niall Scannell drops to the bench and is replaced by James Tracy at hooker. After making his Ireland debut last weekend, Kieran Treadwell takes a place in the second row at the expense of Quinn Roux. Josh van der Flier, who started the first game of the tour against USA, is back in the mix replacing Dan Leavy.

In the backs, Kieran Marmion takes the place of Luke McGrath at scrum-half. Luke Marshall is also back in the fold replacing Rory Scannell at inside centre while Jacob Stockdale comes into the starting XV in place of Simon Zebo. It means that Andrew Conway will move to fullback and Keith Earls switches wings.

Rugby
5 hours ago
By Jonathan Byrne
'Big Papa' Speaks About Life In Galway, Red Cards And Connacht Status
Rugby
1 week ago
By Jonathan Byrne
Rob Kearney Confirms Barbarians Outing Will Be His Last Rugby Match
Rugby
1 week ago
By PJ Browne
Peter O'Mahony Had Some Words With Tomás Lavanini After Cheap Shot
Popular on Balls
Football
3 days ago
By Colman Stanley
Alex Ferguson Names His Greatest Captain, And It's Not His Most Successful Captain
Rugby
3 days ago
By PJ Browne
Trevor Brennan's Sons Played In The Same Top 14 Game At The Weekend
Football
1 day ago
By Gary Connaughton
Frank Lampard Reveals Ruthless Nature Of His Sacking At Chelsea
The Rewind
2 days ago
By Colman Stanley
New On Netflix Ireland: Your Guide To December's New Additions