Where To Watch Leinster Vs Munster? TV Details For The Pro14 Semi-Final Clash

Leinster and Munster's last chance at some silverware comes via the Pro14 and the duo will do battle today for a spot in the final in Glasgow next week. The rivals both need a win to ensure a positive end to their season. Here are all the details on where to watch Leinster vs Munster, kick-off times and team news.

Where to watch Leinster vs Munster?

The match will be broadcast on Eir Sport 1, with coverage getting underway at 1.30pm. Kick-off  at the RDS Arena will be at 2.30pm.

There will also be full deferred coverage on TG4 from 5.oopm. 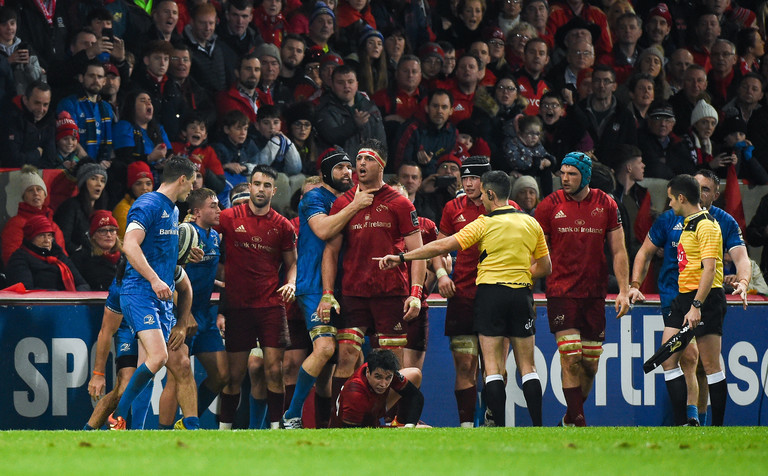 Munster have made four changes after their Pro14 quarter-final victory over Benneton. Keith Earls, Joey Carbery, John Ryan and Arno Botha all come into the side.

Out-half Johnny Sexton and Fardy drop to the bench. O'Brien and Kearney are not in the squad.

Glasgow comprehensively defeated Ulster in the first semi-final to progress to the final which will take place in their home city. The final will be played in Parkhead next Saturday, May 25.

So a reminder for those wondering where to watch Leinster vs Munster: it kicks off at 2.30pm on Eir Sport 1.

Football
2 weeks ago
By Michael McCarthy
The 10 Greatest Moments From The Aviva Stadium's First 10 Years
Rugby
1 month ago
By PJ Browne
Leinster's Fergus McFadden To Retire At End Of Season
Rugby
2 months ago
By PJ Browne
It's 14 Years Since The Thrilling Win That Kick-Started Leinster In Europe
Popular on Balls
GAA
10 hours ago
By Gary Connaughton
Confirmed: We Now Have An Official Date For The GAA's Return
11