It's got to be a pretty special rugby clip to gain traction in the USA, but Munster's sensational team try finished off by Simon Zebo against the Ospreys has done just that.

US sports site Deadspin caught wind of the moment of magic from Thomond Park, and decided to share it with their readers.

In case you haven't seen the try in all it's glory, sort that before we move on:

Here's what they had to saw about Zebo's wonderful score in a post titled 'Irish Rugby Team Pulls Off Masterful 78-Meter Return':

In the matter of just a few clever passes and one extremely bad whiff, the Pro12's Munster helped secure its spot in the upcoming league finals and produced a 78-meter return that rivals anything you’ll see in the NFL this year, taking a clearing kick from Ospreys’ Justin Tipuric to the house from their own 22-meter line.

While Simon Zebo will go down as the one who pulled a pair of Ospreys across the line, the real hero here is No. 9, Conor Murray, whose quick-handed pitch around Munster’s 10 broke the return into a full-on sprint down the sideline.

We really should be using the terms 'return' on kicks and 'to the house' much more in rugby commentary.

Also fantastic was the top comment under the post, as someone clearly still wasn't sure what they had witnessed: 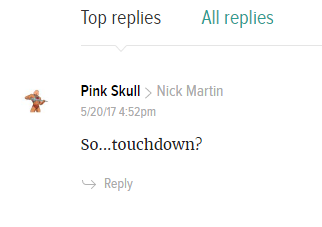 The TG4 commentary wouldn't have helped clear up any confusion. It's rare you see an Irish try in rugby make the news over in the US, so we enjoyed that.