Shaun Murphy came from 4-10 down at one stage in his World Snooker Championship semi-final against Kyren Wilson to win 17-12. Murphy claimed the final eight frames to seal a spot in the final against Mark Selby.

Murphy was exuberant through the match, often celebrating shots with fist pumps.

"I didn't find it intimidating," Wilson told Eurosport about his opponent's celebrations.

"I just found it a little bit over the top and a bit theatrical.

"But, you know, Shaun is a bit of a theatre guy, if you like, and we're in the Crucible Theatre, so fair play to him.

Murphy told BBC that his celebrations were natural reactions.

"The fist pumps, I don't personally have a problem with it," said the 2005 world champion.

"I think we need it in sport. Snooker, we don't have that in common with other sports. I don't think there's anything wrong with it. I didn't feel I was disrespectful to Kyren in any way celebrating my shots at my time."

That was an explanation which Wilson did not accept.

This was Wilson's third time in four years reaching the semi-finals. He went one step further in 2020, eventually losing the final to Ronnie O'Sullivan.

Wilson accepted when Murphy gets going, he's hard to stop. Though, the 29-year-old does think he has a long-term advantage over 38-year-old Murphy.

"His long potting was sensational," he said.

"When his cue action gets going, it's like Rolls Royce cue action. When his timing is there, the balls are just tapping the back of the pocket with ease and he makes the game look easy.

"In hindsight, that does mean a little bit more to Shaun than myself. Shaun's a lot older. He's not had the success that I've had here in recent years. That's the thing I've got that's positive going forward - I've got youth on my side." 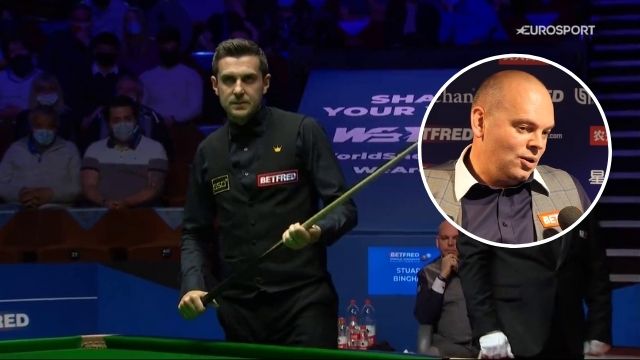