Northern Ireland's Mark Allen is through the second round of snooker's British Open, but it's fair to say his win in garnering more attention than a usual first round match of a tour event. With Love Island obviously lacking in sufficient personal drama, swathes of people instead switched over to ITV4 where they witnessed reality television at its best.

Allen was drawn to face his former partner Reanne Evans in the first round of the tournament. Evans, a 12-time women's world champion and Allen, the world number 10, split acrimoniously in 2008. The two share a teenage daughter, but relations have been fraught over time. The pair went to court over maintenance for their daughter, and just a few months ago, Allen reportedly requested that Evans be removed from the TV studio while he was at the practice table at the World Championships in the Crucible.

From the get go last night, things got awkward when Evans refused Allen's offer of a fist bump before the opening break. She would go on to win two of the first three frames, and looked set to take the match when leading 60-22 in the fourth frame. Allen, who appeared to be off his game significantly, managed to get back to the table to win that frame, and then took the decider to go through to the second round.

At the end of the match, Evans headed back to the dressing room without acknowledging Allen.

Afterwards, both players tried to play down the incident, but admitted it was not an easy draw for either of them. Evans denied she had snubbed the fist pump, but was focusing on her break off.

"I was told at the start no handshakes or anything because of Covid, so I was visualising starting the match and just went straight to the table.

"No one wanted that match but you have to accept it, it’s sport and these things are going to happen."

Allen too was honest about how difficult a situation they were put in by being drawn against each other.

"It was horrible, and not something I really want to be doing again. I tried to stay professional and I think I did that and can hold my head up high.

"Reanne played really well for two and a half frames. I’d rather not answer any questions about her refusing the fist-bump.

"I just wanted to get through this match for obvious reasons, but overall my form is good and hopefully I can take that on now."

Just asked Mark Allen if there's anyone he fancies in the next round...

'Give me Trump, it'll be easier than that.'

Seven time world champion Stephen Hendry was on ITV commentary for the match and called it "the most intense match I have probably ever witnessed."

Most people watching along on TV seemed to agree.

This Reanne Evans v Mark Allen match must be one of the most extraordinary sporting match-ups of all time? #BritishOpenSnooker

Didn’t expect to be gripped by snooker on ITV4 of a Monday night but this Reanne Evans-Mark Allen game is likely gonna be on a documentary of some description in the future so may as well watch it live.

(Here’s the background for context) https://t.co/Y6UYLgHBFd

Snooks: Mark Allen wins 3-2 after his ex Reanne Evans throws it away in frame four. No post-match handshake - she can't get out of there fast enough. An awkward but very intriguing watch.

#LoveIsland a bit tame compared to the snooker, where Reanne Evans has refused to shake the hand of former partner Mark Allen pic.twitter.com/kXhFAXkSk8 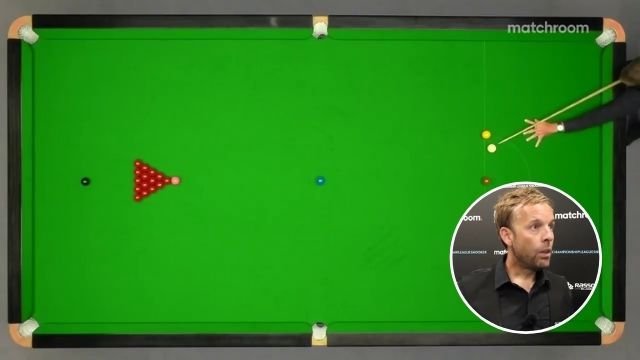