Mark Selby says he was hurt by Stuart Bingham accusing him of gamesmanship following their World Snooker Championship semi-final over the weekend.

Selby won the match 17-15, and went on to win his fourth world title with victory over Shaun Murphy in the final.

"I was a little bit disappointed with Stu because I feel like I get on well with him," Selby told Eurosport podcast, The Break.

"He dug me out, saying, 'Is it gamesmanship?' and that he'd lost a little bit of respect for me by the way I was doing it.

"I never ever go into a match to pull a stroke or put somebody off. That's just not in my nature. I go out there and try my hardest.

"I was a little bit disappointed in Stu saying that, but at the same time, he's just come off the table, and then you get a microphone shoved straight in your face. You look at some of the football managers who say the wrong things at the wrong times - it's not easy to do an interview straight after you've lost.

"The last thing you want to do is probably an interview straight away. I'm sure if they'd interviewed him after a few hours, and he'd thought about what he wanted to say, I'm pretty sure that he wouldn't have come out with the stuff he came out with in the interview."

Selby added that he was particularly surprised by Bingham's comments as he had offered his fellow Englishman support when he was banned in 2017 for betting on snooker matches.

"I hold nothing against him," said Selby.

"If I see him, I probably won't go up to him and speak to him straight away because I felt what he said was a little bit harsh about me.

"If he apologises, then it's just water under the bridge.

"I'd never ignore him. If I see him, I'd say hello. I was just a bit taken aback.

"A few years ago, he got banned for six or seven months - which was quite harsh - and I was one of the few people texting him saying, 'I hope you're OK, mate. Keep your chin up. You'll come back stronger'.

"For him to mention [gamesmanship] in the interview was a little bit hurtful. That's life. I'm not going to lose too much sleep over it." 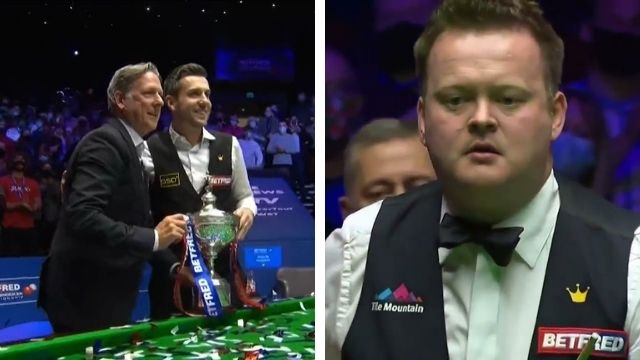