Watch: Ronnie O'Sullivan Shocks Commentators With Use Of Controversial Shot

Mark Williams has hit the headlines in the recent days for his use of a controversial shot at the World Championships, but it seems as though the technique may be catching on.

Instead of the more traditional break, the Welshman has often opted to to roll the cue ball off the cushion into the back of the pack. This leaves little chance for his opponent to get a clean shot at one of the reds.

Many have criticised this technique, with world number one Judd Trump saying he would never play such a shot.

However, Williams said recently that he sees little wrong with the break:

How can they ban a perfectly legal shot?

Are they going to start banning rolling up to the baulk colours or when the white goes behind the black?

They’ve sent an email asking players what they think about it. Get on with it. There are a lot of worse things happening than worrying about my poxy break-off...

The only reason I’m doing it is because I’m sick and tired of leaving a red on and people potting it and making breaks.

I just thought I had to find a way to stop them doing it, which I have.

It seems as though Ronnie O'Sullivan is in the same camp as Williams.

The defending world champion got the second session of his second round game against Anthony McGill underway earlier today, opening the first frame with the controversial shot.

Philip Studd and Dominic Dale were certainly surprised to see O'Sullivan use the tactic in commentary.

Has Ronnie O'Sullivan been getting lessons from Mark Williams?

Studd: Look at this! He's never lost the capacity to surprise, has he, O'Sullivan down the years? I can't see a lot wrong with it.

Dale: Well, I certainly didn't! But he needs a little more practice because he's left this red to the left-centre.

Yes, that's certainly woken me up! I wasn't expecting that from Ronnie.

I'm going to call it a mistake from Ronnie because he left the red on. How can you ban what is a legal shot? How do you ban it?

It didn't work out all that well for O'Sullivan on this occasion, leaving a red on for his opponent.

It will be interesting to see if this shot will be addressed after the tournament, although how any ban could be implemented remains to be seen. 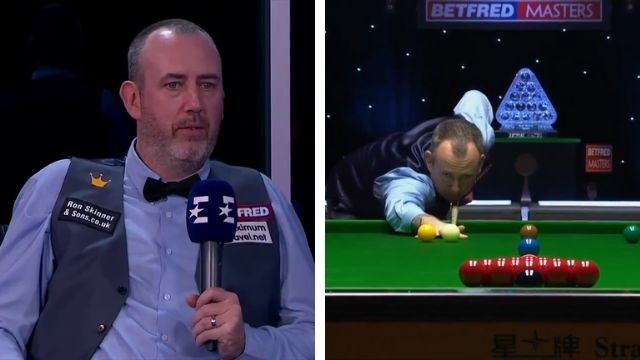 GAA
2 hours ago
By Balls Team
A Tribute To 10 Of The Toughest Men In History Of The GAA
Irish Life
21 hours ago
By Sean Meehan
A Balls.ie Guide To Sexual Consent In The Digital World