Ronnie O'Sullivan was knocked out of the Northern Ireland Open yesterday, with the 45-year old unhappy with the behaviour of the spectators during his 4-3 loss to Yan Bingtao.

It had been an eventful week for the Englishman, who said he was 'bored' during his opening round win over Andy Hicks and said there was a lack of atmosphere in the venue. He would later say this comment was not meant to be a criticism of the fans.

His last 16 match against his Chinese opponent was a back and forth affair, with O'Sullivan unhappy with the way the spectators were behaving during the match.

In the during the third frame, he has asked to referee to stop fans from streaming in and out of their seats in the middle of frames.

O'Sullivan would go on to lose 4-3 in the best of seven clash, and while he admitted it was a fair outcome, he is not very enthused by these new shorter formats taking over snooker.

A number of players have complained in recent times about various tournaments using shorter formats, something many feel takes away from the spectacle.

The six-time World Champion said that the fact that the sport was moving in this direction has resulted in him placing even more of his concentration on the bigger tournaments, meaning the other tour events mean very little:

These tournaments are very, very minor, they’re like match practice really. The three big events that are important are the Worlds, the Masters, the UK.

These best of sevens are just like pro-ams, like we used to play when we were amateurs.
If I had to choose between winning 10 of these, what are these tournaments called? Home Nations, and one world title, I’d take one world title.

Obviously that’s a proper event. This is just a bit of match practice. No-one is going to remember you for winning a Home Nations, are they?

I’d rather have Tiger Woods career than Colin Montgomerie’s. Or even Brooks Koepka. I know he doesn’t win many of the other events, but you still want to have those four majors tucked away. That’s where the pressure is, that’s where it counts. They’re the blue riband events.

Speaking from everybody else I get why they’re excited about them events. If I was Yan Bingtao I’d be super excited about it. My heart has gone out of giving blood, sweat and tears on the tour. I’m happy just to come and hit a few balls.

I really enjoyed that today. I enjoyed pitting myself against a good youngster who played well, who probably outplayed me and deserved to win.

O'Sullivan opted not to take part in the opening two ranking events of this season, with the Northern Ireland Open his first appearance. 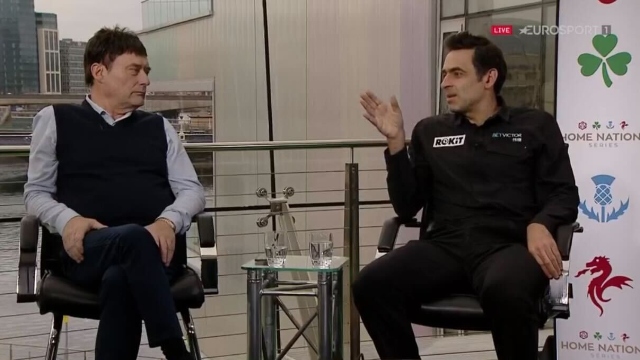