Ronnie O'Sullivan is coming towards the end of his career, meaning that there will soon be a major hole in snooker to be filled.

Many casual fans only watch the sport to see 'The Rocket' in action, with the future of the game a worry going forward after the Englishman decides to hang up his cue.

While there are a number of supremely talented youngsters around at the moment, none of them seem ready to step up and fill O'Sullivan's shoes. One of them may have the talent to do so.

Zhao Xintong has been on the tour for a number of years now, but has yet to experience much success in tournaments. Despite this, O'Sullivan believes he is among the most talented players snooker has ever seen.

Speaking to the BBC after his UK Championship win over Noppon Saengkham, the 45-year old said Zhao Xintong could be snooker's answer to Roger Federer.

He could do with maybe tightening up. I watch him sometimes and I was a bit like that, but then I got [Ray] Reardon around me for a couple of years and you start to play a better defensive game.

He needs that, because in those frames where things are a bit scrappy he looks like he will come off second best. But he is good, he's unbelievable.

How long can you keep saying he's got potential? At the end of the day, you've got to the business on the table.

As for O'Sullivan himself, he booked his place in the quarter-finals with that victory last night.

He was happy to get over the line with a 6-3 win, but admitted he isn't that concerned with how he will fare in the rest of the tournament.

I don't care - if I win it, great, and if I don't it will have no impact on my life and what I do. If anything I'd rather be sitting with Jimmy White (doing punditry for Eurosport), having a laugh...

I'm just happy to be through and still in the tournament. It is what it is out there. I really haven't got a clue how it all works.

I don't care, I really have no interest. I'm going to have a couple of Guinnesses tonight and a bit of mulled wine and some nice food.

It will be interesting to see how the remainder of the tournament plays out, although the fans will be hoping we can see a bit more O'Sullivan magic before it wraps up. 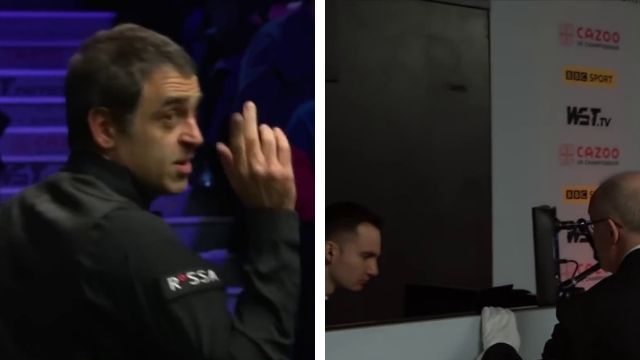