While events on court have been moving along nicely for Novak Djokovic thus far at Wimbledon, his interest in the World Cup has drawn the ire of government officials in his native Serbia.

I am backing Croatia....I know who I would like to lift the trophy.

After publicly declaring his support for Croatia in a recent interview with the Serbian daily Telegraf, Djokovic has been branded an "idiot" by Vladimir Djukanovic of Serbia's ruling party.

Political tensions have existed between the neighboring countries dating back to the break-up of Yugoslavia, so the 12-time Grand Slam winner's comments were met with angry posts on social media from the Serbian government official.

Djokovic is a national hero and I thank him, but support Croatia....how can he not be ashamed?... I repeat that all those who supported Croatia against Russia are psychopaths and mad, fit for being locked up in an asylum.

Djokovic shared a photo with a number of Croatian players on his Instagram account a couple of months prior to the World Cup, and his recent comments of support for their World Cup campaign align him with another legend of SW19 who has given his full-backing for England's semi-final opponents.

Goran Ivanisevic's loyalty to his native Croatia will come as no surprise, but during an interview with the BBC while on coaching duty for quarter finalist Milos Raonic, the former Wimbledon champion couldn't resist a dig at the "arrogant" English support:

I hope we don't lose to the English because already you say you are in the final. You already won. You're coming home. You are bringing the trophy - you're so arrogant....For sure you are coming home but I hope not with a trophy. 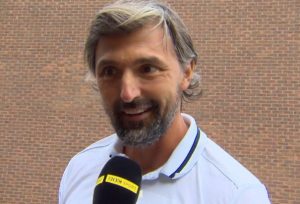 This year's Wimbledon has been largely in the shadow of the World Cup, particularly across the water where Andy Murray's absence and the exploits of Gareth Southgate's side in Russia mean that more eyes are firmly focused on the football. Both Djokovic and Ivanisevic will follow up their personal involvements in the Wimbledon men's quarter finals by willing the Croatians to break English hearts later that evening.