The organisers of the French Open have fined Naomi Osaka for refusing to participate in interviews at Roland Garros - but their accompanying statement shows a complete lack of understanding for the mental health issues Osaka cited as her reasoning.

The world no.2 had previously stated that she would not participate in interviews surrounding the French Open, saying that it was chiefly for mental health reasons.

The organisers at Rolland Garros were not hugely sympathetic towards Osaka - in fact, they were not sympathetic at all, and their soulless statement proves that.

Naomi Osaka announced last Wednesday on social media that she would not participate in the mandatory media interviews at Roland-Garros 2021.

Following this announcement, the Roland-Garros teams asked her to reconsider her position and tried unsuccessfully to speak with her to check on her well-being, understand the specifics of her issue and what might be done to address it on site.

Following the lack of engagement by Naomi Osaka, the Australian Open, Roland-Garros, Wimbledon and the US Open jointly wrote to her to check on her well-being and offer support, underline their commitment to all athletes’ well-being and suggest dialog on the issues. She was also reminded of her obligations, the consequences of not meeting them and that rules should equally apply to all players.

Naomi Osaka today chose not to honour her contractual media obligations. The Roland-Garros referee has therefore issued her a $15,000 fine, in keeping with article III H. of the Code of Conduct.

The organisers then had the gall to suggest that they had the mental health of participants in mind, as they chose to fine one of the most high-profile players in the tournament for seeking some space in the name of her mental health.

The mental health of players competing in our tournaments and on the Tours is of the utmost importance to the Grand Slams.

We individually and collectively have significant resources dedicated to player well-being. In order to continue to improve however, we need engagement from the players to understand their perspective and find ways to improve their experiences. Every year we seek to deliver better experiences to our fans, our players and our people, and we have a long and successful track record in achievement on this count.

The statement goes on to detail the player's responsibilities to carry out their media duties, quickly losing site of their brief moment of clarity surrounding mental health.

anger is a lack of understanding. change makes people uncomfortable.

The simple fact is that Osaka has every right to do anything she deems necessary to protect her mental health. In an era where we are becoming more and more aware of the dangers of poor mental health, and how much it has damaged so many people, Osaka's decision could have been seen as a powerful moment of self-protection and self care.

Instead, the decision from those at Rolland Garros to fine Osaka sends a message that people should just shut up and get on with it. Naomi Osaka is not an athlete first and a person second, and she has every right to protect herself. It's a sad indictment of the French Open that this is how the entire incident has gone down.

For what it's worth, Osaka let her playing do the talking, showing her determination to grind out a first round win over Romanian Patricia Maria Tig on Sunday afternoon. It shouldn't matter whether Osaka speaks to the press or not, but the speed with which Rolland Garros have attempted to shut down her attempts to protect herself are a disappointing step backwards for mental health awareness in sport.

The reaction to the decision from the French Open organisers has been widely critical, and there is at least solace to be found in the support Osaka has found from the wider sporting world. But those at Rolland Garros, and those in similar positions elsewhere, must do better.

SEE ALSO: Katie Taylor Outlines The "Turmoil" Of The "Lowest Period" In Her Career 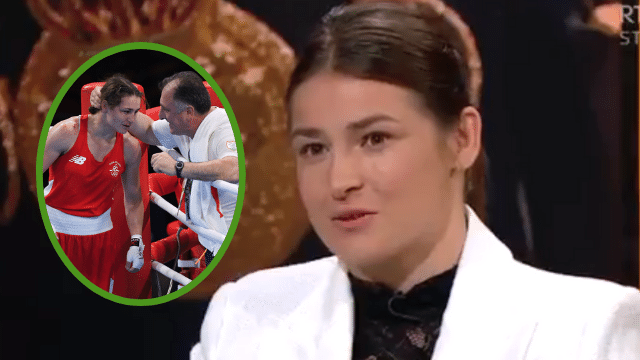