In this, the final year of the decade, you often find yourself looking back.

Of course, nostalgia is a feeling, rather than something you can quantify. Robbie Brady's goal against Italy can evoke feelings of nostalgia in the same vein as watching the first season of Jersey Shore. Sometimes, when looking back, you need to set parameters.

We've been thinking about the music of the 2000s, a time when culture seemingly peaked (there was a number one tune about JCBs for Christ's sake). But what of the artists that came into our lives for a fleeting moment before vanishing into the 2010s?

Contained in a 4-4-1-1 football formation, here are 11 acts from the 2000s you may have forgotten. Get ready for an abundance of "oh yeah, remember that tune?" moments:

We start off with some folky goodness. The man who looked like the archetypal 'white lad with dreads', Faulkner rose to prominence off the back of his song 'Dream Catch Me'. His debut album Hand Built By Robots went double platinum in the UK, as well as going platinum in Australia, purely down to Faulkner looking like every Australian you've ever met in a backpackers hostel.

Since then, it's been a gradual decline for Faulkner, despite having a number one album in 2012. His past two projects have been released on his own independent label, Battenberg. Tasty stuff altogether.

"I wish I was a punk rocker with flowers in my hair." 12 words that caused significant consternation in 2006, with several commentators lambasting the juxtaposing lyrics. Black Mirror creator Charlie Brooker called her "the anti-Christ of music." Thom's rise to the mainstream also garnered scrutiny, with her careful PR campaigning rather than her music leading to major label interest.

Despite all that, 'I Wish I Was A Punk Rocker' is most definitely a bop. Since then, Thom's fallen off the face of the earth, all the while continually releasing music. She caused more controversy in 2018 when he launched a tirade against the BBC for not shortlisting her song 'Earthquake' on radio.

The runner-up to Will Young on the 2002 edition of Pop Idol, Gates became a spiky-haired superstar as soon as the show finished. Gates' star burned bright but faded quickly, with three consecutive UK number ones coming in 2002 alone. Another number one with a cover of 'Spirit In The Sky' came in 2003, with a little help from The Kumars.

Subsequently, a rapid decline ensued. By 2006, he was appearing on an ITV show titled Whatever Happened To Gareth Gates? which was designed to kickstart his career ahead of a 2007 return. His album of that year Changes didn't do much, and Gates retreated from the spotlight again. Gates is now a stage star, performing in a raft of West End productions.

You couldn't have a soundtrack of 2004 and 2005 without playing Natasha Bedingfield. Her debut album Unwritten produced two of the decades finest pop songs, the eponymous track and the anthemic 'These Words'. Bedingfield's 2007 album N.B. also produced the likes of 'I Wanna Have Your Babies', a strange yet catchy tune.

Since then, Bedingfield faded from the spotlight. She did the rounds on fictional TV shows, appearing as herself. Then, she ended up appearing as herself on celebrity-based shows. She's still releasing music, with her new album Roll With Me scheduled for release in at the end of August. The rest? Still unwritten.

A man who owes his career to the UK Garage scene, as the white label of his 2001 song 'Gotta Get Thru This' ended up at number one through UKG edits and pirate radio play. He then showcased a softer side with 2002's 'If You're Not The One'. However, Bedingfield nearly lost his life in a car accident in 2004, making a full recovery.

With two of the decades finest songs in the back pocket, Bedingfield continued to release music sporadically without much fanfare. He became a judge on New Zealand's version of The X Factor in 2013, lasting only one year. Here he is alongside his sister at the heart of our team's defence.

Named as the BBC's Sound Of 2007, Mika's music truly was the soundtrack to that year. A variety of singles released from his debut album Life In A Cartoon Motion shot to the top 10 of the UK charts. However, despite consistently releasing music subsequently, Mika was unable to reach the heights of 2007.

He was a judge on the Italian iteration of The X Factor for two seasons. Ever since, Mika has found relative success on the continent, even going number one in Italy in 2013. His new album is set for release in October 2019.

Another reality TV alum, Darius joins Mika in a midfield of singularly-named artists. Darius was actually on both Popstars and Pop Idol, reaching the finals of the latter in 2002. By the way, a top three of Will Young, Gareth Gates and Darius is probably one of the best rosters musical talent show history. After Pop Idol, Darius turned down Simon Cowell to sign with producer Steve Lillywhite. Lillywhite was the brains behind Darius' first album, which contained the excellent 'Colourblind'.

The Scottish singer stayed relevant for a number of years thereafter, flittering in and out of the top 10 of the UK charts. Darius then joined fellow Pop Idol finalist Gareth Gates for a career on the West End, starring in the likes of Guys And Dolls and Funny Girl.

It may be something to do with Scottish singers and Ireland, but it always seemed that KT Tunstall was revered on this isle far more than her homeland. We wouldn't be surprised to see tracks like 'Other Side Of The World' and 'Suddenly I See' still playlisted on Irish radio to this day.

Tunstall was a 2005 darling, despite starting beef with Dido over the 'Thank You' singer's voice. She has been consistently releasing music since then. In 2018, she went fully deaf in her left year, leading to severe balance issues.

Okay, just get ready to witness the cover of Uncle Kracker's seminal hit 'Follow Me'.

Are you ready? Right here we are: 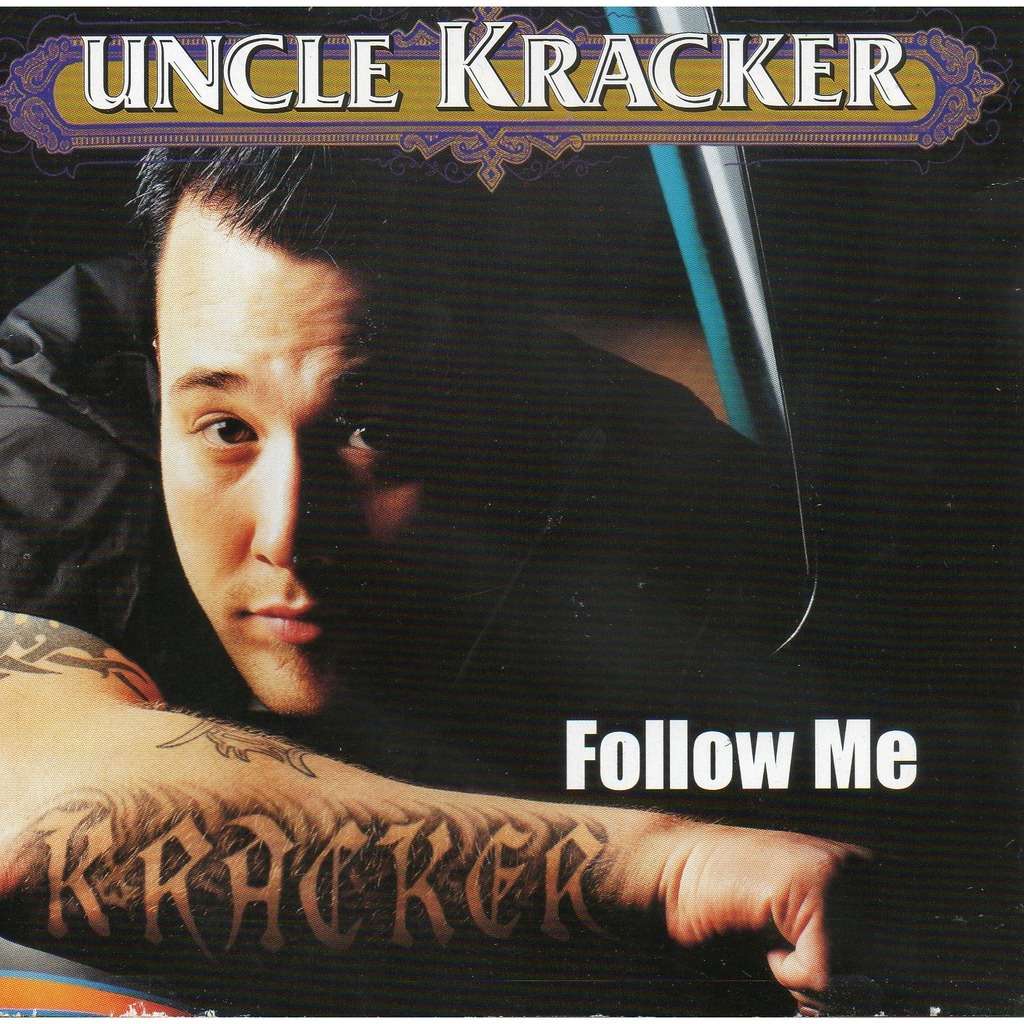 Such chaotic energy from a man so quintessentially country in his artistry. 'Kracker' became a household name in 2001 when 'Follow Me', a country rock song produced by Kid Rock, became a worldwide hit. His only other songs of relative note were a cover version of 'Drift Away' by Mentor Williams and 'Smile', a 2009 song which went platinum in Australia (Australia's a bit strange, isn't it?).

He released songs sporadically since then, making a return to the craft in August 2018 following a four year hiatus. Also, the lead singer of Sugar Ray is in the video for 'Follow Me', which is absolutely terrific.

There are nine million bicycles in Beijing. That's a fact. Katie Melua has had an  excellent career in music. that's also a fact. That's evidenced by all of her studio albums reaching the top 10 in the UK albums chart. However, Melua's singles are another story. From being a consistent figure in the UK top 40 since her debut single 'Closest Thing To Crazy' in 2003, Melua went seven years without breaking the top 40 before reaching 29 with 'Fields Of Gold' in 2017.

Interestingly, Melua held three different citizenships before the age of 21; Soviet, Georgian and British. Also, in 2006, Melua had a tulip named after her. What a life she's led.

Lemar occupies the number 9 role in our team, solely down to the fact he's related to former Tottenham striker Jonathan Obika. That may be the most needless piece of trivia in this entire piece. Either way, Lemar is another reality TV album, finishing third on Fame Academy in 2002. Lemar is one of the most successful performers to come from the format, winning two BRIT Awards in his career.

Despite being one of the most consistent artists of the 2000s, Lemar hasn't broken the UK top 40 since 2010. We strongly believe that if he re-released 'If There's Any Justice', he'd have another top 10 hit on his hands.

And so, here's the final squad. Did we miss anyone? Let us know! 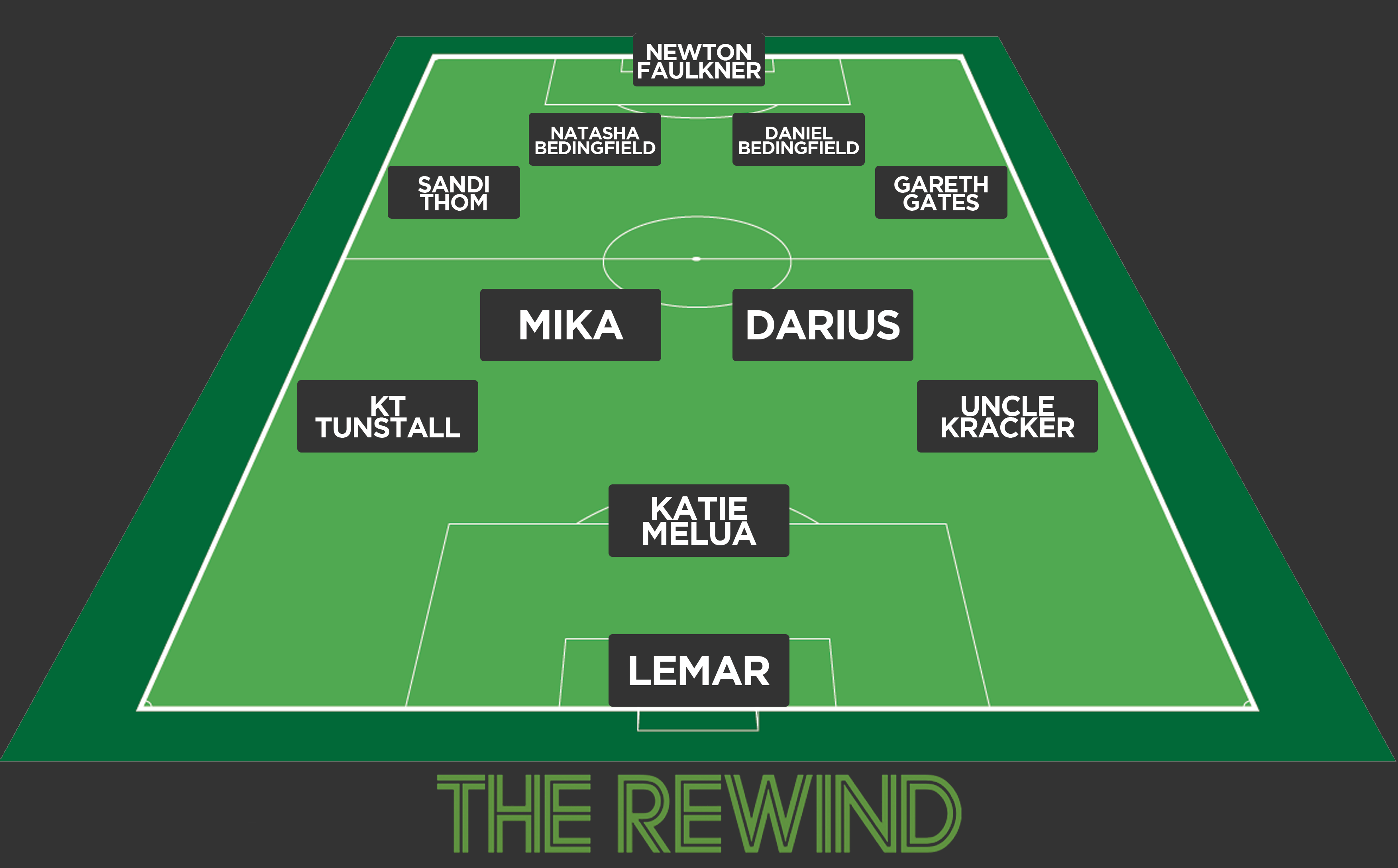 The Rewind
4 months ago
By Colman Stanley
The Worst (And Best) Covers Of Irish Folk Songs And Ballads
Popular on Balls
Football
1 day ago
By Eoin Harrington
'Ronaldo Is A Cod' - Remembering Eamon Dunphy's Infamous 2008 Rant
GAA
21 hours ago
By PJ Browne
The Draw Has Been Made For Tailteann Cup Opening Rounds
GAA
1 day ago
By PJ Browne
Donal Óg Cusack Defends Dublin Hurlers After John Mullane Criticism
The Rewind
2 days ago
By Eoin Harrington
Watch: Brilliant Dermot Morgan Dublin Segment From 'The Travel Show' Resurfaces