The Land Of The Free. At a time of worldwide crisis and panic, we look west for guidance and leadership. The USA, leaders of the western world since World War II, is the place we should look to see if we're dealing with things correctly.

When we watch our non-political Chief Medical Officer give daily briefings on the pandemic, we look across the Atlantic and see their president arguing and shouting at reporters, governors and everybody else for two hours. When we honour social distancing and do our very best to flatten the curve, we cast our eye to the old US of A and see broadcasters telling us the economy matters more than life and death, and see armed citizen militias storming statehouses because they can't by hair-dye.

Maybe we shouldn't be looking west after all.

In a week when US deaths from coronavirus spiraled over 30,000, it was time to get back to work, time to open to the beaches, and time to dye your hair. Because that's freedom.

These are the “protesters” in Michigan. Real tough guys, carrying their guns to a protest. pic.twitter.com/5XGAb1NTuq

1) Open gun laws have no place in our society. They only serve to intimidate.

2) Interesting how this “protest” happens in a swing state after Trump calls out Michigan Governor as “that woman”#MichiganProtest
. pic.twitter.com/m45D7O7k98

Is it just me or do these protesters(ors) look like ‘Walkers’ from “The Walking Dead”?

Naturally, where there's a gun toting "freedom" protest, our old friend the Confederate flag will never be far away.

The next time someone complains to me (a grad student in U.S. History) why American history always has to be about race: THIS

Protesters with CONFEDERATE flags against QUARANTINE in MICHIGAN

(Also, racism is not a bug in the GOP it’s a feature) #MichiganProtest pic.twitter.com/SQ5j7SNL3C

And where there's a Confederate Flag, a Swastika or two is never too far behind.

Just in case you wondered what kind of people #OperationGridlock is made of.
Here they are flying a freaking swastika flag
Nazis. They are Nazis.
Rural Michigan is full of them#Lansing #WednesdayWisdom #GOPDeathCult pic.twitter.com/ZdvsGnlP9T

Make sure you stay safe by practicing communism ❤️😌 pic.twitter.com/u3efPVZnqI

“God gave us an immune system for a reason”
Taken at the “Liberate Minnesota” rally outside the Governor’s Mansion on Friday.
This woman using her children as props. Bad parenting. pic.twitter.com/IhKI4F0FPl

We can't help but notice a lot of white people in these pictures. Would be interesting to see the reaction in the States and around the world if groups of black people arrived at statehouses with machine guns.

Meanwhile in New York, even the Morgue overflows are too full. 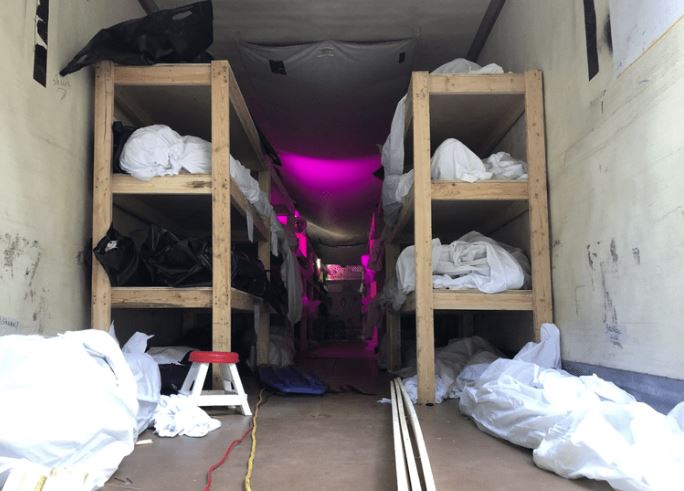 And the response of the President of the United States of America? Encourage more vigilantism for no more reason than to always be at war.

This is not normal.

SEE ALSO: Watch: The Best Performances From The One World: Together At Home Special