These Are The Best Irish Halloween Costumes Of 2021

Halloween has now come and gone. With 2020s spooky celebrations put on hold, people went all out this year with their costumes. Despite the bad weather that circled over Ireland - it didn't stop many from showcasing their fine creations. But they're not your ordinary garb: it take some work to make our list of the best Irish Halloween costumes.

The average Joe can throw a bit of make-up or a mask on and be done with it. We've seen plenty of sexy nurses, zombies and pirates in our day.

These people, however, went through the brainstorming, the sourcing, the design and the follow through. It's not something that should go under the radar.

They are our Irish Halloween warriors and they should be celebrated as such. So here are some of the picks of the weekend in costume:

The Best Irish Halloween costumes of 2021

Fiona Frawley went for the Child of Prague and pulled it off masterfully. Many an Irish mother or grandmother has sent the religious statue out onto the grass or the window ledge in the hope of good weather. It's a tried and tested method of cheating the system.

Alma McClorey knocked it out of the park here, showcasing her niece Rebecca portraying President Michael D. Higgins. The addition of the two Bernese Mountain Dogs is also a deft touch, replicating Bród and Misneach with uncanny resemblance. Bravo.

I've recreated the classic Irish 80's kid Halloween costume. A bin bag and some of your Ma's old eyeliner was all you needed.
And none of that trick or treat nonsense! It was....
"Help the Halloween party." 🎃🕷 pic.twitter.com/D3LfF2XYww

A personal favourite, as Collie Ennis represents the 80s and 90s Halloween kids to a fine degree. Back before there were Amazon Prime deliveries and a plethora of costume shops, you'd be thrown into a black liner bag and be grateful. Anything else was a bonus.

Aisling Bonner really peeled back the cheese with this creation. The cheesestring will forever be a staple in the Irish lunchbox, bringing back memories of wholesome nutrition and bouncy goodness. The hat looks incredibly heavy too, so kudos for bearing this outfit.

Amy Huberman took a rib at her husband, Brian O'Driscoll, with the Beach BOD look. Complete with robe, towels, bucket and spade - Beach BOD is ready for an adventure in the sand. After all, it's an easy costume for BOD himself to pull off, if he wants an easy one.

With a son with hair like that, I felt I had no option but to indulge my vicarious tendencies before he’s old enough to decide for himself that he’d rather dress as Spiderman.

One for the football aficionados. Sports writer Paul Dollery couldn't pass up the opportunity to dress his son as Colombian legend Carlos Valderrama. The bouncing blonde curls were reminiscent of El Pibe. There's no doubt he'll grow up to be a boss deep-lying playmaker.

Recreated the most iconic photo call of all time, hire me @LeoVaradkar pic.twitter.com/0s7o0ncCWk

Another football related outfit and a double act which is even more impressive. Rheanna and a friend recreated the infamous ticket touting photoshoot with Noel Rock and a Del Boy looking character in front. Rather apt given the ticket situation with the Portugal game.

It's become an iconic symbol of Dublin over the years and Ruth Medjber has created an iconic costume. With the deep blue backdrop and seagulls flying overhead, the Poolbeg Chimneys, or Poolmedj Chimneys, show what can be done with a bit of improvisation.

Met a wee guy in town with this as his Halloween costume pic.twitter.com/pYIkIrSiNs

Finally this man was spotted on the streets of Glasgow, and while it might not be in Ireland, it qualifies through mutual slagging. The costume bearer is portraying the simple message, "Yer Da sells Avon," which is the most inhumane insult known to man, woman or child.

See Also: Pat Kenny Says He Was Offered A 'Spliff' Last Time He Was On A Train 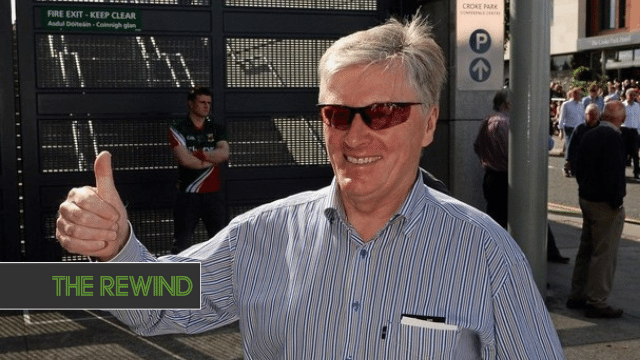 The Rewind
16 hours ago
By Jonathan Byrne
Father Ted In Pandemic Times: Man Uses Fake Arm To Dodge Vaccine
GAA
20 hours ago
By Eoin Harrington
Sean Boylan Had A Powerful Appearance On Last Night's Underdogs
The Rewind
2 days ago
By Colman Stanley
New On Netflix Ireland: Your Guide To December's New Additions
Previous Next