Scottish football fans don't need to be reminded that it's been 22 years since their national team reached a major tournament.

They might even be glad that through this global crisis, their Euro 2020 play-off against Israel is to be postponed.

But, thanks to the Scottish FA's media team, they can transport themselves back to the good old days, when tournament qualification was almost a guarantee. The entirety of then-Scotland manager Craig Brown's 1998 World Cup Diary is available in full on YouTube, and it is a must-watch.

Brown took on the role of main protagonist and narrator, despite the fact that he wasn't the least bit media-savvy and his narration took on a slightly disinterested slant.

Either way, Brown was chosen to narrate Scotland's path through the 1998 World Cup. The official soundtrack to which was Del Amitri's 'Don't Come Home Too Soon', a rousing pop song reminding everyone that when it came to major tournaments, Scotland were a bit shite.

Either way, the diary begins back in Scotland, where referee Hugh Dallas is conducting a talk on how FIFA were 'cracking down' on tackles from behind. Then, it was onto the team getting kitted-out, with each player donning a kilt.

It's at this moment you hear Brown's tentativeness to interject with narration. He wants to allow the pictures to tell the story, he doesn't want to be in this recording studio pouring over footage of his team's early exit from the World Cup, but he has to. So, as the lads are lining up for their team photo, Brown stumbles over himself in order to say something, anything that can elevate the scene.

Once everyone was... fully-clothed, it was time for the official photograph.

An impressive and, eh, most unusual team group. 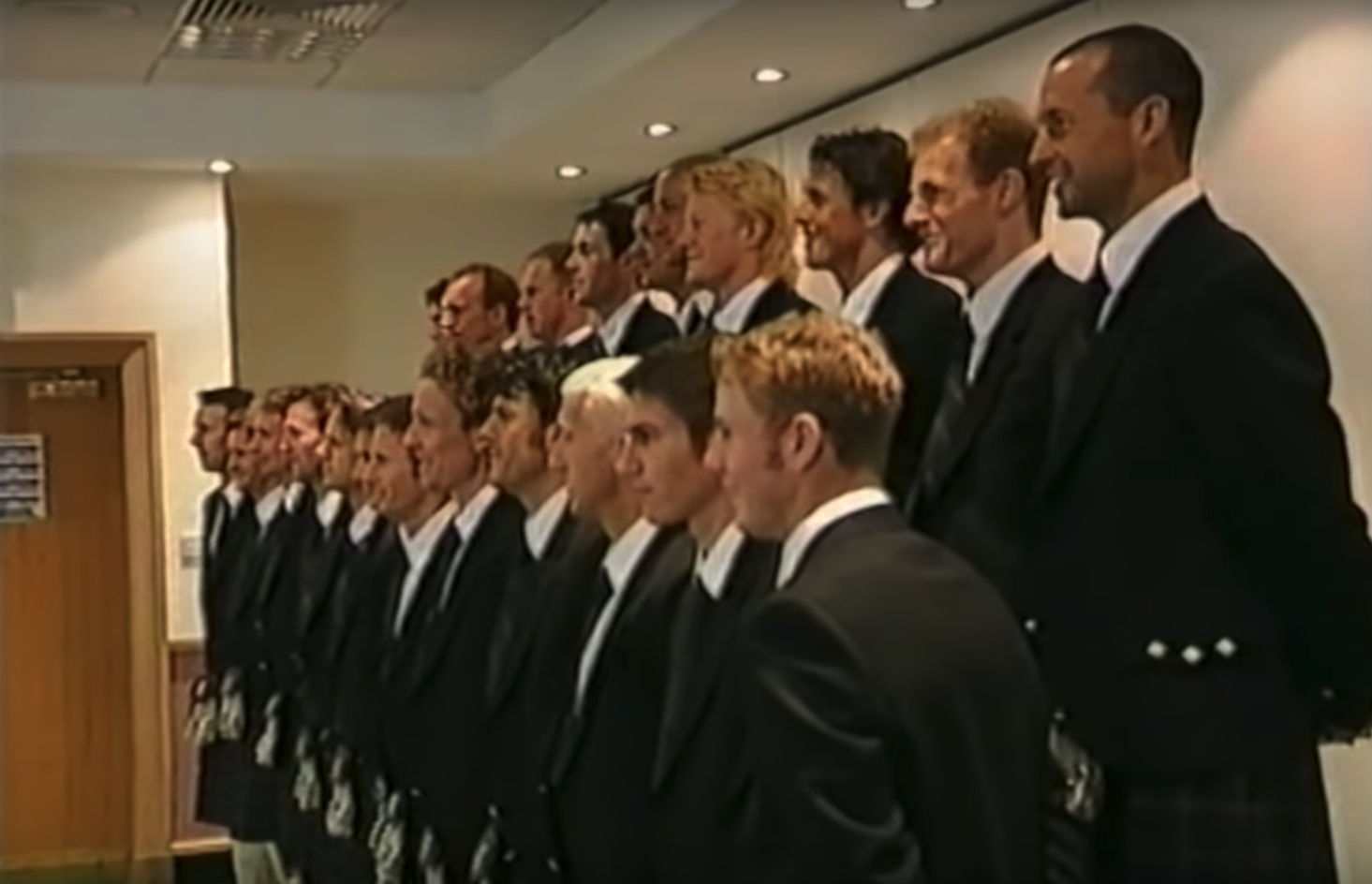 These kind of insights are found throughout the near hour-and-a-half running time, Brown struggling to find anything of note in the mundane clips given to him.

It's heartening to know that playing at a World Cup isn't dripping in the glamour you anticipate. Instead, it's discussing how to disclose your team to press, either by giving it to the daily newspapers to print on the day of the game or to mention it via TV interview.

One of the more bizarre scenes in the film is when Tony Blair visits the team hotel before their first match against Brazil. The then-Prime Minister spends most of his visit talking to John Collins about being able to speak French. The most mind-boggling aspect of the exchange was that nearly the whole exchange was kept in the film!

There are certain gems which play out in the film. Things like Jim Leighton looking at the Stade de France funnily because someone shouted that 'there's a spaceship on tap ae at'. Also, there's the scene of Colin Calderwood, amped up on adrenaline, going the wrong way out of the dressing room before the Brazil match, much to the amusement of the security staff and teammates.

After the Brazil match, there's also a strangely shot interview with Craig Brown in the dressing room. Brown's face takes up half of the screen, with the other half showcasing his players drying themselves after a shower. If you expected to see arses, you will get arses. And no, we're not just talking about Jim Leighton's clanger against Morocco.

Also, you get first-hand action of Craig Burley bleaching his hair in a local hairdressers. The highlights of Scotland's tournament were through Craig Burley. First, his delicate chip against Norway gave the Scots their only point of the tournament. Secondly, his peroxide blonde hairstyle which was debuted for the final group game against Morocco. Unfortunately, Burley was sent-off during the game as the Scots lost 3-0. 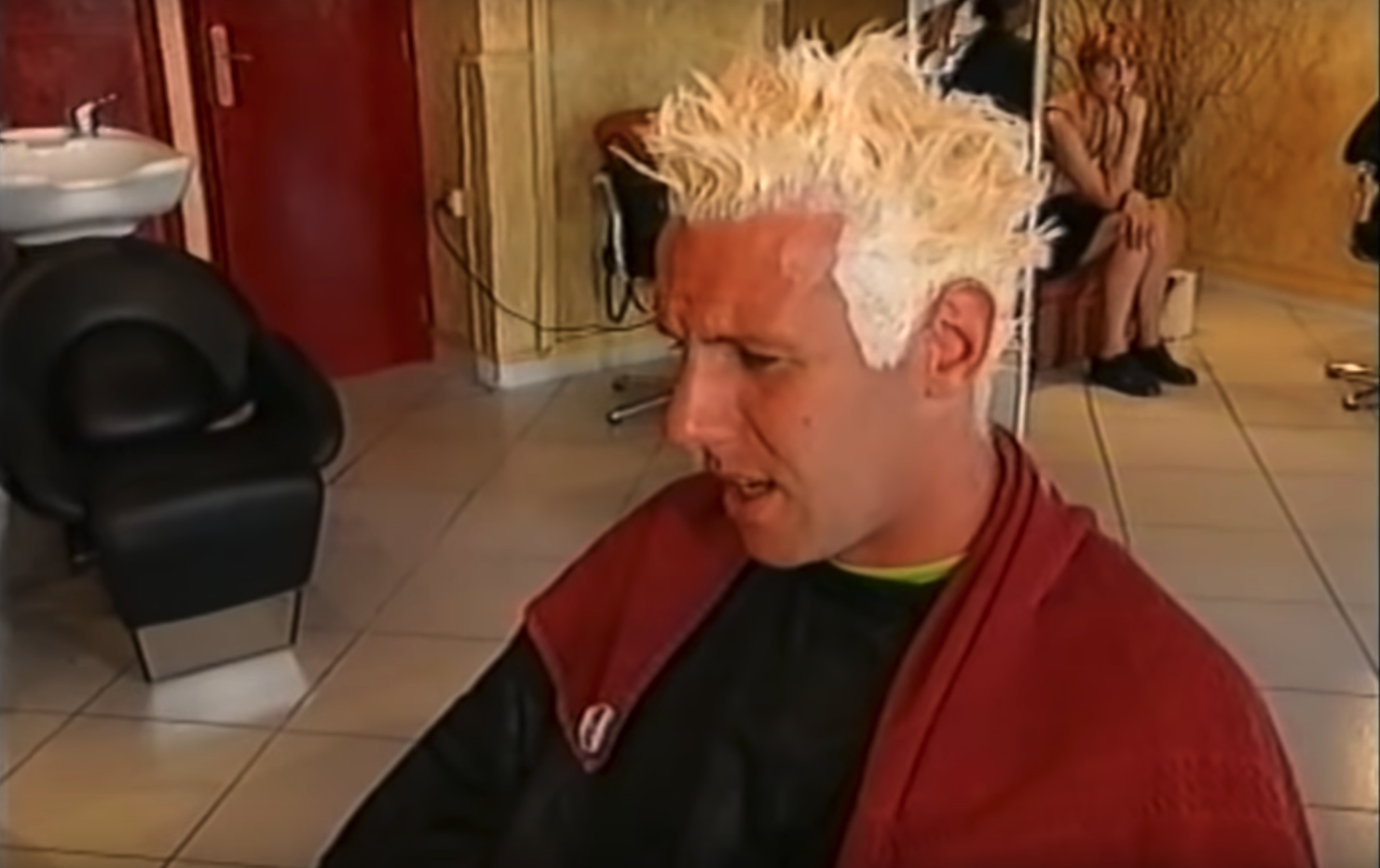 Burley, being interviewed as the haircut is ongoing, is just blatantly slagging the hairdresser as she goes about her job. That's probably why he ended up with a shocking barnet at the end of it.

Craig Brown narrates throughout, some ingenious moments but mostly mundane.

That's the beauty of the film. If you want an insight into how teams go about their business at major tournaments, this is the film for you. If you want a first-hand look at how you shouldn't narrate a film, you've also come to the right place.

'Craig Brown's 1998 World Cup Diary' is available in full below:

SEE ALSO: Netflix Release Series Based On Earliest Days Of Football In England

The Rewind
9 hours ago
By Gary Connaughton
Latest Netflix Release Is Definitely The Strangest Dating Show Ever Made
The Rewind
3 days ago
By PJ Browne
Matt Damon Has Plans For Big Irish Trip After Pandemic
The Rewind
5 days ago
By Eoin Harrington
Explained: How To Watch The Marvel Movies In Chronological Order
Previous Next

The Rewind
9 hours ago
By Gary Connaughton
Latest Netflix Release Is Definitely The Strangest Dating Show Ever Made
The Rewind
3 days ago
By PJ Browne
Matt Damon Has Plans For Big Irish Trip After Pandemic
The Rewind
5 days ago
By Eoin Harrington
Explained: How To Watch The Marvel Movies In Chronological Order
Popular on Balls
Football
23 hours ago
By Eoin Harrington
A Mad Night At The Euros Turned Into A Very Good Evening For England