A Tribute To The 1994 Castletown Donkey Derby

This week we are running a massive public vote to crown Ireland's Greatest Ever YouTube Video. Today we are down to the semi-final stages, where among the match-ups is Eamon Dunphy Calls Out Rod Liddle vs The Castletown Donkey Derby 1994.

To see the full semi-final match-ups visit our main article here but before you do,  let us take you back to when Gavin Cooney put together a fitting tribute to one of the greats, 'The Castletown Donkey Derby 1994,' on this very site three years ago...

Having been sequestered in the hearts and minds of those fortunate enough to be present for nearly two decades, a true public servant named Kevin Daly uploaded the highlights of the event to YouTube, allowing the world to bask in the most Irish video of all time.

It managed to capture the nuances and idiosyncrasies of Irish society to an even greater degree and in a much pithier fashion than Joyce did in Ulysses.

In seven minutes, the video offered more than simply a snapshot of rural Ireland: it probed to the very heart of the virtues and imperfections of the human condition.

It's had nearly a million views on YouTube, so here is a tribute to its finest moments:

The star of the show was a reluctant hero

The undoubted star of the show was Joe O'Brien, who worked the dual presenter/commentator role despite the fact he had no plans to commentate on the race: he was handed a mic by videographer Kevin Daly beforehand, as he told the Limerick Post: "He didn’t know he was commentating on the day, he was just handed a microphone".

O'Brien took the mic, however, and immediately assumed the role of no-nonsense reporter, shoving a small girl out of the way for an interview with young competitor Billy Lee in the opening moments: 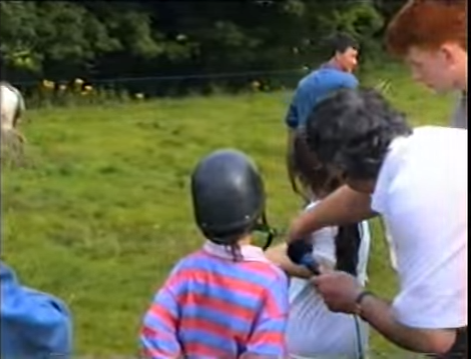 As eager as O'Brien was, he did show some inexperience: realising 14 seconds into his interview with Billy that he had run out of questions, so he merely repeated the same question again and again, successfully confirming Billy's name was, in fact, Billy on numerous occasions.

That said, O'Brien was unafraid to bring the common man's eye to this seismic event, naming Jennifer's donkey as the "hairy fellow".

Before O'Brien would go on to prove he was the heart of the event, he also showed that he could also be the conscience of a party, voicing his hope that spectators holding pints would return their glasses to the pub afterwards.

Once it did begin, O'Brien lasted almost thirty seconds before descending into fits of laughter, offering the kind of visceral veracity of voice that only Michael O'Hehir and Barry Davies occasionally touched. Not that it was entirely smooth: he mispronounced Ciaran's donkey Miss Elly as Marcelly for virtually the whole race.

Such slight inaccuracies were offset, however, by the summoning of one of the most iconic lines in the history of Irish sporting commentary, when Marcelly [sic] took Ciaran off piste:

She's shtone mad to take Ciaran into the bushes!

As the above Limerick Post article went on to elucidate, O'Brien was among the last people in Ireland to actually see his passing into legend: as of 2011, a fortnight after the clip surfaced online, Joe hadn't seen it owing to his not having broadband.

The race had great narrative depth

The race mixed the genres of the brutish, arrogant big kids losing to the underdog [See D2: The Mighty Ducks] along with providing an intriguing origin story centering on the damaged childhood of a later hero [See virtually any superhero movie released in the wake of the success of Batman Begins].

The three competitors were young Billy Lee, his elder sister Jennifer Lee and Ciaran Mulqueen. Mulqueen played the role of Iceland to the Lees' Mighty Ducks. Ciaran - approximately five times the size of Billy - swaggered up to the race without even knowing the name of his donkey, having to be told it by an eager onlooker. 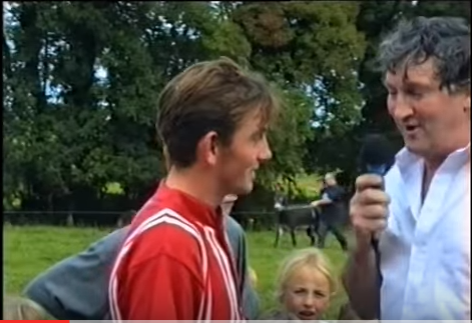 In the end, he was hoisted by his arrogance and lack of familiarity with his animal, spending much of the race in the bushes as a result of an insubordinate animal, whicch threatened to injure him halfway through: 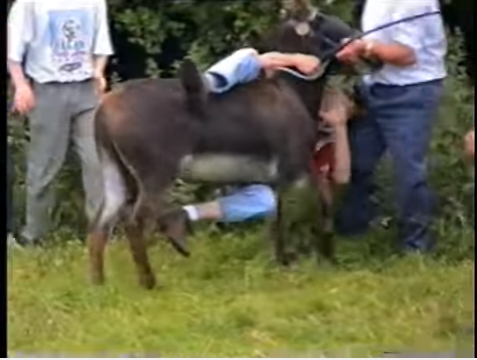 That meant the race came down to a classic sibling rivalry: Jennifer Lee versus younger brother Billy. Jennifer eventually shaded it, perhaps by virtue of her added experience. We are now admittedly indulging in speculation from here, but we assume that such a narrow defeat spurred Billy onwards to chase his dream: something he has ultimately achieved: he is a jockey of some renown. His profile on GoRacing.ie makes reference to the fact he rose to stardom in the Castletown Derby, and he has made hundreds of thousands of euro since riding his first winner in 2002.

Most interestingly, however, is the identity of the coach who has made all of this possible: his sister, Jennifer.

The entire story is essentially the plot to Godfather II had Michael not murdered Fredo, and instead realised that he was of great use to him. 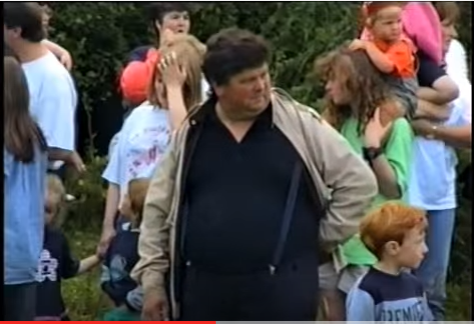 Above is the local hero who made it all possible: Seanie McElligot of Castletown Motors, the man who was willing to stump up the £40 necessary to sponsor the event. 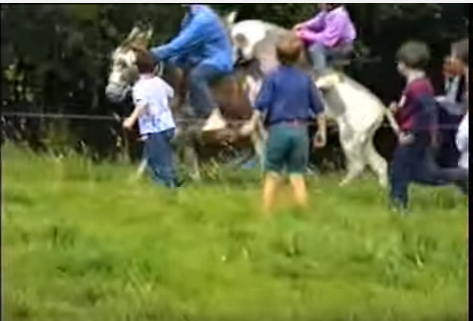 In the end, the result of the race was decided by the caprices of the animals involved. Billy could have stolen it at the end, but his donkey Percy decided that he would chase a different kind of holy grail on the final straight. Euphemistically summarised by O'Brien as "Percy had a lot of things on his mind" post-race.

It is a reminder that while humans can try and tame these magnificent beasts as best we can, sometimes we simply can't, and that the imposition of our will upon this Earth is at times impossible and generally ill-advised.

Relive the entire event below:

You can vote for Castletown Donkey Derby in the race to be crowned Ireland's Greatest YouTube Video below and see  the full semi-final match-ups here.

The Rewind
6 months ago
By Balls Team
Opinion: Why Amy From Co. Cavan Is The Real Hero Of 'What's Snots'
35