These are interesting times in Northern Ireland. Yesterday, Arlene Foster announced she'll be standing down as Northern Ireland's First Minister. While it may seem remarkable to those of us down here, Foster was seen by many in her own party as 'too moderate' and her decision to abstain on a vote on gay conversion therapy is seen as playing a major role in the heave against her by the grassroots of the DUP.

The bookies favourite to be next First Minister is Edwin Poots. Interestingly, Poots has reportedly said he'd only take the role if he'd also be DUP leader.  The Lisburn MLA is currently Northern Ireland's agriculture minister, and Poots will be manna for heaven for the hardliners in the DUP if his wikipedia page is anything to go by.

Like a lot of people on this island, we paid Poots' wikipedia page a visit this morning and were surprised to see some of the quotes correctly attributed to the man in the 'Personal Views' section

In that same interview, he explained his suspicion of the Big Bang Theory:

You're telling me that cosmic balls of dust gathered and there was an explosion. We've had lots of explosions in Northern Ireland and I've never seen anything come out of that that was good. And you look at this earth and you tell me that there was a big bang and all of a sudden all that is good about this earth came out of it?

In 2012, Poots banned blood donations from gay people. He explained the reasoning behind the ban to the BBC. However, he wanted to extend the ban.

"I think that people who engage in high-risk sexual behaviour in general should be excluded from giving blood... And so someone who has sex with somebody in Africa or sex with prostitutes, I am very reluctant about those people being able to give blood."

On the occasion of Arlene Foster becoming First Minister in 2016, Poots also said that Foster's most important job is as a 'wife, mother and daughter'. He explained that 'when I was Health Minister, I used to say that it was my second most important job, the most important one being a husband, father and son.'

In the same interview, he confirmed that his nickname is Pootsy.

Again, all of these quotes are real and are there to be found on the internet. A lot of this was said between 2006 and 2012 and there's a chance Pootsy - who's had both covid and cancer in the past year - has mellowed with age. We hope his views have *ahem* evolved with time.

SEE ALSO: Joe Brolly Debate With Gregory Campbell About The GAA and The DUP Is Important Viewing 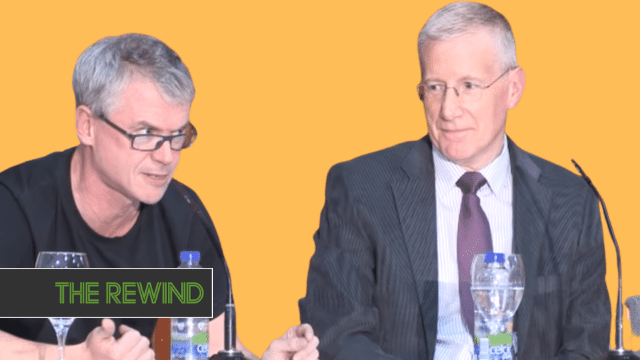 The Rewind
1 week ago
By Fiachra Gallagher
Hesitant Acquaintances: Edwin Poots, The DUP And The GAA
The Rewind
1 month ago
By Fiachra Gallagher
Joe Brolly Dismissed From Claire Byrne Live Debate After Cutting DUP Criticism
Popular on Balls
Rugby
16 hours ago
By Eoin Harrington
Mike Brown's 16-Year Harlequins Career Is Over After Stamping Ban Issued
Other Sports
17 hours ago
By Balls Team
12 Of The Most Cringeworthy Moments In Sporting History
The Rewind
13 hours ago
By Balls Team
The 5 Best Irish Accents By Foreigners In Cinema History
The Rewind
13 hours ago
By Donny Mahoney
The Best And Worst British Media Coverage Of The Ballymurphy Verdict