12 Of The Best Pieces Of Craic From This Year's Election

Between the local elections, the European elections and the Divorce Referendum there has been no shortage of campaign material doing the rounds and we've had a right laugh at some of it. From national to local, there have been some 'outstanding' posters, promotional videos and songs. Here are just a few:

First a foremost, Ben Gilroy wants you to know why he carries a 'hurley stick':

While Peter Casey has had an epiphany:

Why is it so hard to get sparkling water in anything other than plastic bottles? #RuralIrelandNeedsCasey #EP2019 pic.twitter.com/5QE2anxl5G

Speaking of Peter Casey, his upset at a 2013 parody account of Luke 'Ming' Flanagan has been particularly entertaining:

You are an embarrassment to Ireland, stop using foul language.

There was this press release:

Incredibly, "I'd Vote 4u" wasn't the worst song of the campaign:

The greatest politician nickname was spotted in Kerry. Move aside, 'Ming':

Why is the podium in a field??

No, this is the best election poster:

The Denise McMorrow poster has to be my fave. It looks like a cross between a Texas Republican Party candidate, a Eurovision CD cover and an ad for a new sitcom coming soon to ABC. She just needs a wind machine in that luscious hair and she’s good to go. Fab. pic.twitter.com/4He5DkS0zP

The real fun, however, has been with the fake candidates: 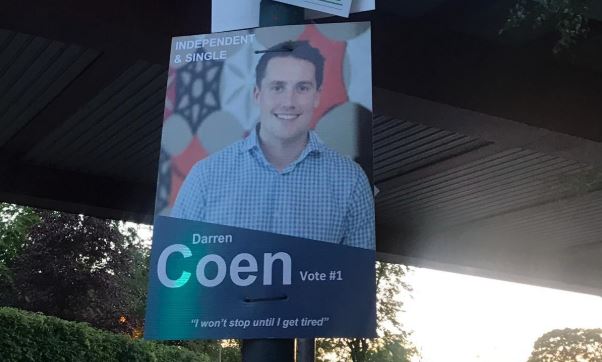 Absolutely howling - the lads at home have made fake election posters for my friend Darren. The slogan is "I won't stop until I get tired". I'm in tears #EP2019 #LE19 pic.twitter.com/9s5gefoBw8

Who done this? ?? @lewiscapaldi

If you liked these then there are plenty more to peruse on the always excellent @electionlit Twitter account.

Also Read: A Ridiculous Steve Bruce Story About A Run-In With The Law

The Rewind
10 hours ago
By Paul Moore
WATCH: The Undoing Looks Like The Next Mystery Thriller To Keep You Hooked
2