26 years ago today, we all went to heaven lads, wahey!  Of course, we're talking about comedic heaven because on 21 April 1995, the world was introduced to the iconic residents of Craggy Island.

Since its first episode 'Good Luck, Father Ted' aired, Graham Linehan and Arthur Matthews' comedy has become a global sensation and it's still a massive part of Ireland's cultural dynamic.

Honestly, how many times do you quote a line, rewatch an episode, or laugh at a Father Ted gag on a daily basis?

With this in mind, The Rewind have decided to do a deep dive on the very first episode and reveal some behind the scenes information that even hardcore fans might not know.

Those moments when Dougal looks out the window and sees mad stuff happening were originally intended to be a running gag throughout the show.

“We thought every week that Dougal would look out the window and see different things - like the ants you see later on in the episode. It was one of those things that fell by the wayside because we realised it’s not really what the show was about. Maybe it is? But we just couldn’t keep it up,” said Graham Linehan. 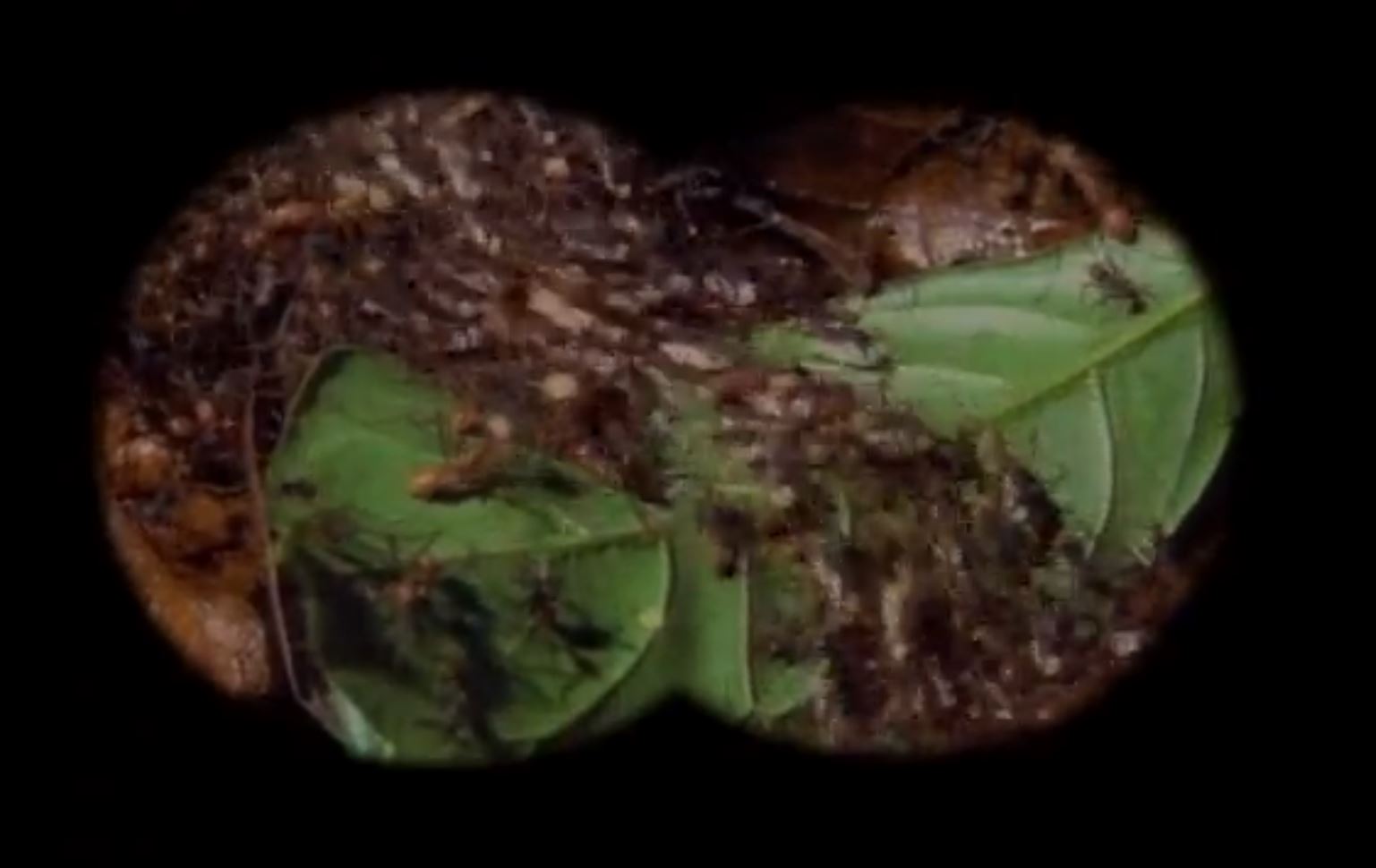 A small detail that most people might have missed, there’s a spider on Dougal’s bedside locker. Maybe that’s where he got the inspiration from?

This being said, there’s no sign of it being kept in a pram, or wearing a nappy. 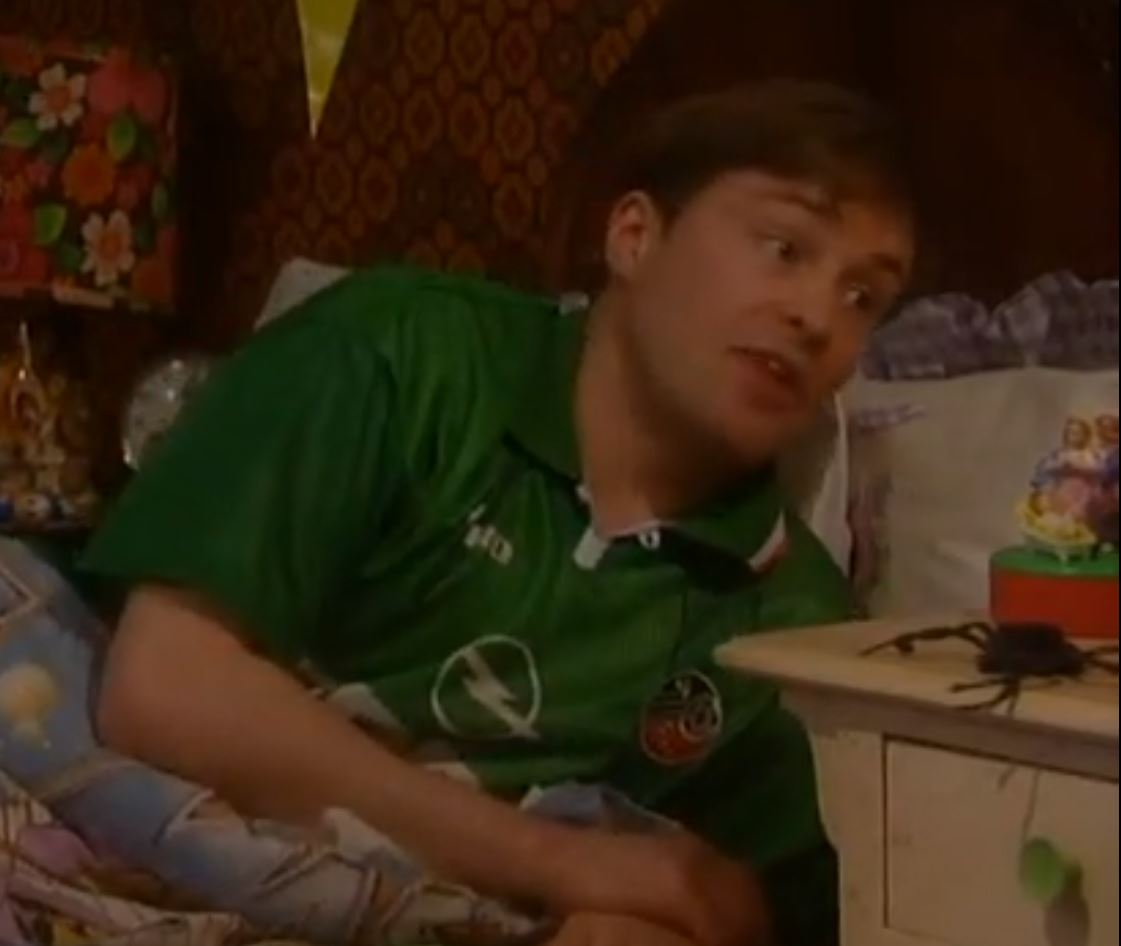 Again, the animation that’s used here is something that the creators planned on doing more of throughout the show.

“I love that. That’s something I’d have liked to have done more but didn’t - things like the reality vs dreams diagram. Also, there’s a cartoon in this episode. That’s something we never did again. Really, what you’re seeing here in the first episode is us trying out tonnes and tonnes of things and seeing what works,” said Linehan on the DVD commentary. 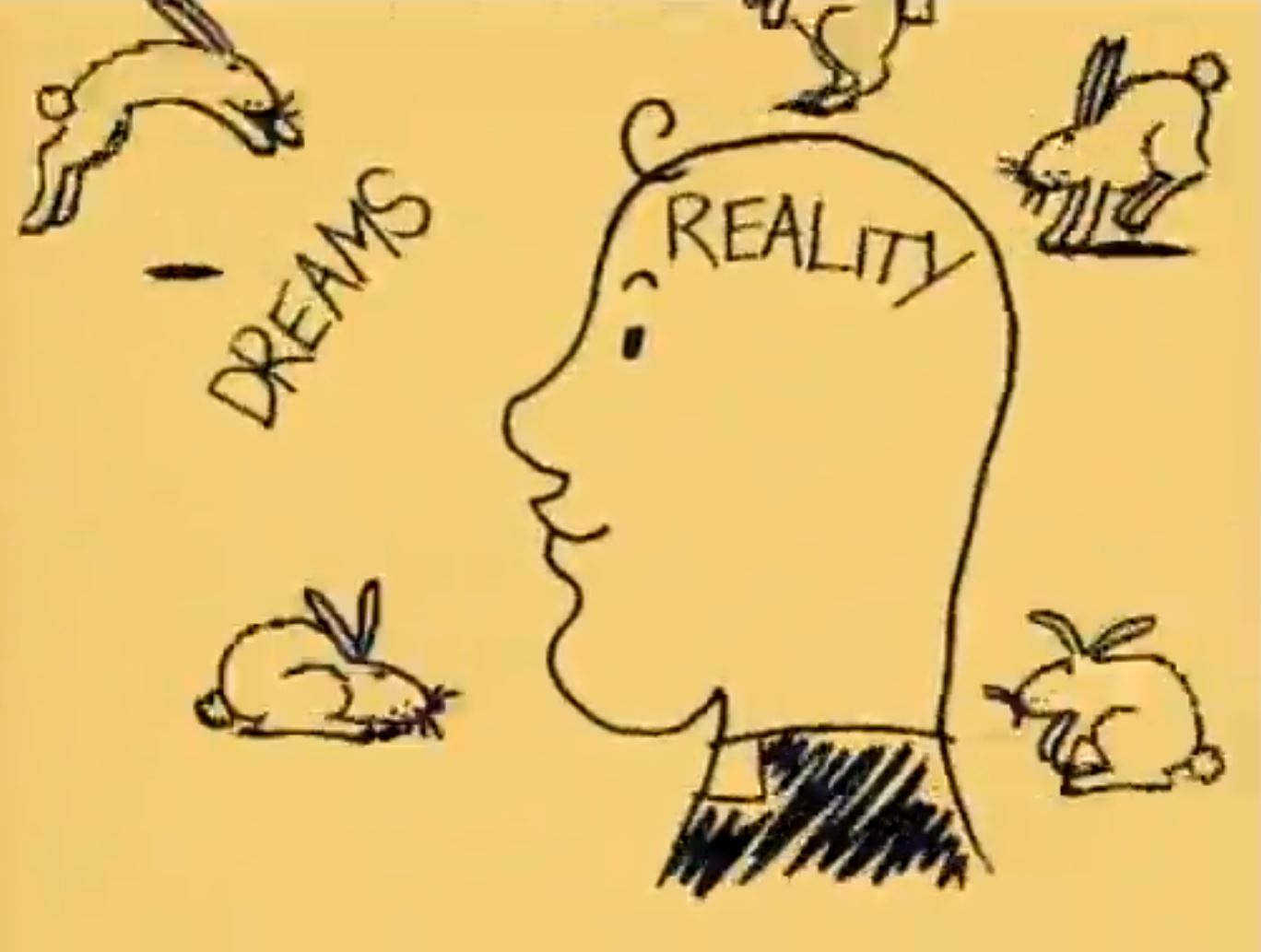 What made Father Jack so angry that he'd throw a bottle of drink through the TV screen?

Well, that would be the show’s writers, Arthur Matthews and Graham Linehan, because they're the voices that you hear before Jack destroys the screen.

The two writers are featured in a TV show where they're discussing jumpers.

Despite the madness that regularly unfolds on Craggy Island, in the DVD commentary, Linehan said that the show does have some narrative rules in terms of its storytelling.

For example, Linehan states that anyone who’s not living on the island, or is temporarily visiting Craggy Island, is usually portrayed as "normal".

In the first episode, we see this with Terry McNamee from Tele Éireann. 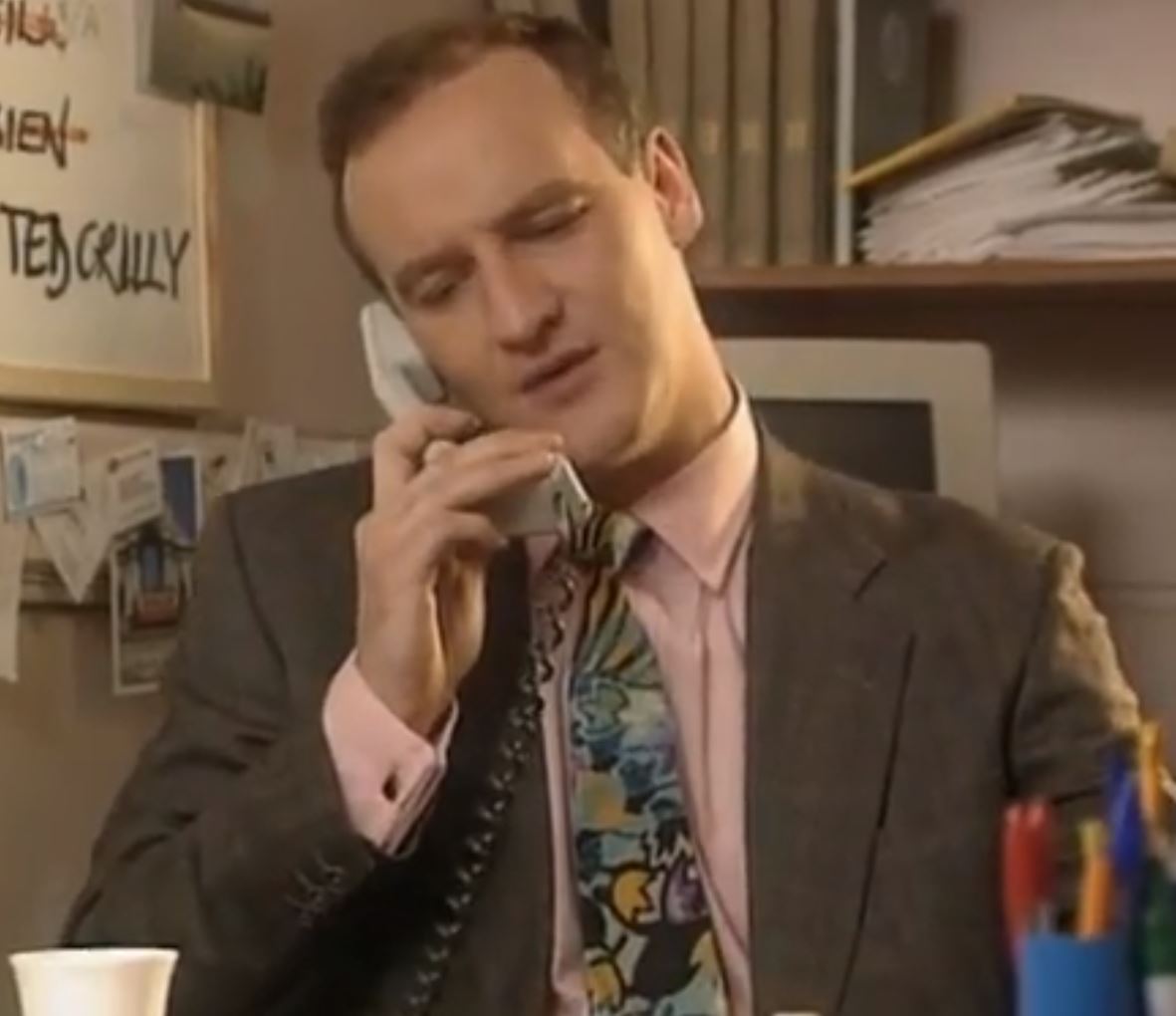 The show’s creators were originally casting older actresses for the role of Mrs Doyle.

It was the casting agents that recommended going for someone younger and Pauline McLynn was the first tape they saw.

A small detail but a fun one. If you look closely, Dougal puts his imaginary guitar back in the stand after playing air guitar. 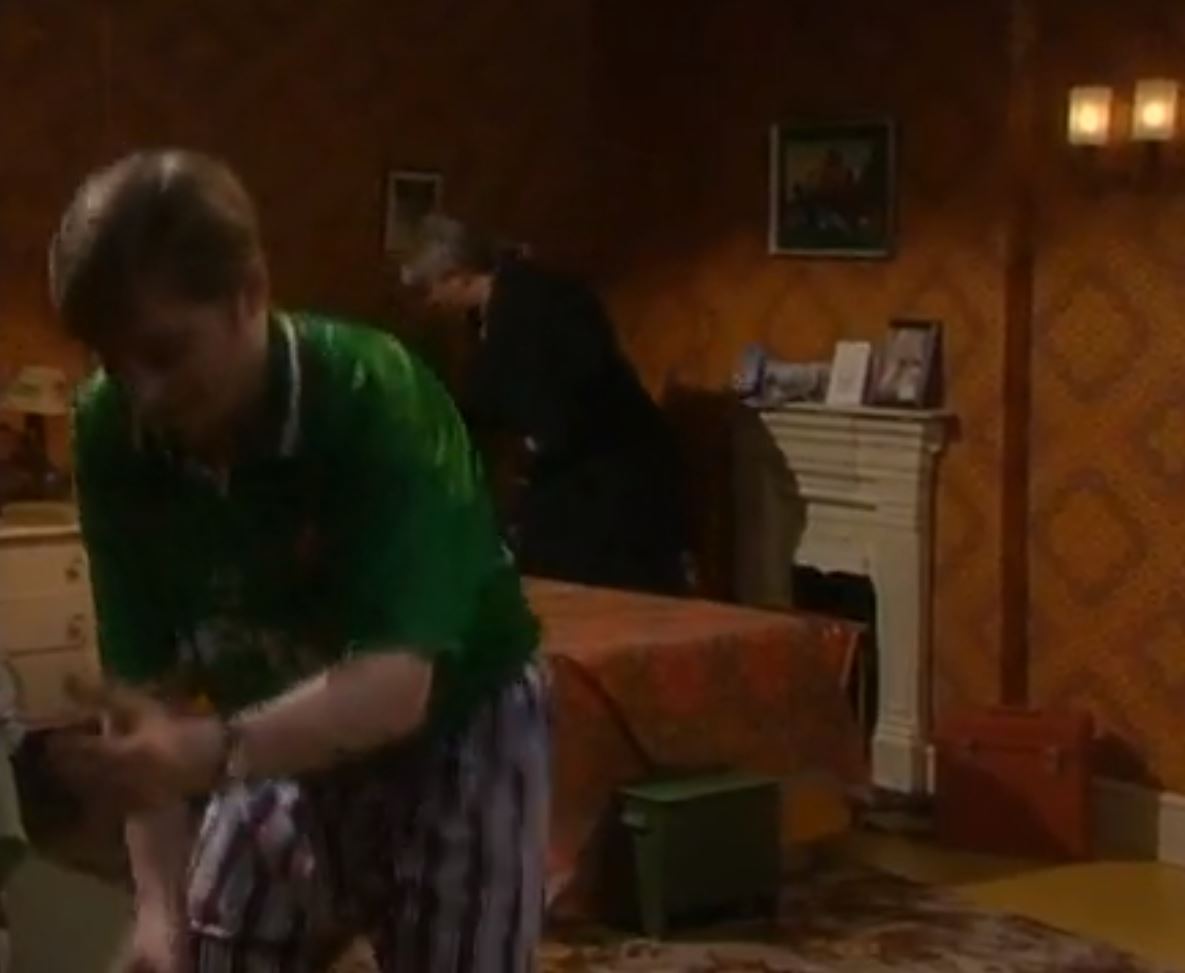 The sight of two grown men sleeping in the same room isn’t something original in a TV show- Morcambe and Wise springs to mind - but there’s a reason why Dougal and Ted share a bedroom.

Linehan felt this living arrangement allowed the writers to do more “quiet and philosophical jokes” which involved Dougal and Ted talking about life and religion.

Pat Shortt is one of Linehan’s favourite actors to star in the series and the comedian also features in his favourite shot of the opening episode - our first introduction to Tom.

Also, a fun fact about Tom’s ‘I shot JR’ T-shirt, it’s inspired by Homer Simpson wearing the exact same one. Linehan loved the idea of featuring something that was a craze years ago, but now looks sad and old. 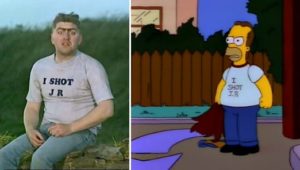 "Dumping the old glow in the dark."

The geography of Craggy Island was always designed to grow and shrink, according to the writers’ needs.

The writers never wanted to be specific about Ireland’s most famous fictional island but they did give clues. For example, we know that the west side of the island floated off.

From the very first episode, Linehan and Matthews wanted to make it clear that the normal rules of geography and geology don’t apply to Craggy Island.

Linehan admits that Funland is inspired by Dublin’s Funderland.

Sadly, the Crane of Death isn't a Funderland attraction.

As much as every couple might (weirdly) identify with Craggy Island's most dysfunctional couple, the characters of John and Mary are firmly based in satire

Before divorce was introduced in Ireland, Linehan has said that he views the couple as a commentary on how Irish marriages would have to stay through thick and thin, even if the relationship is clearly toxic.

Matthews also feels that John and Mary are a reflection of a peculiarity in Irish society, how some people would always behave themselves differently whenever a priest shows up. 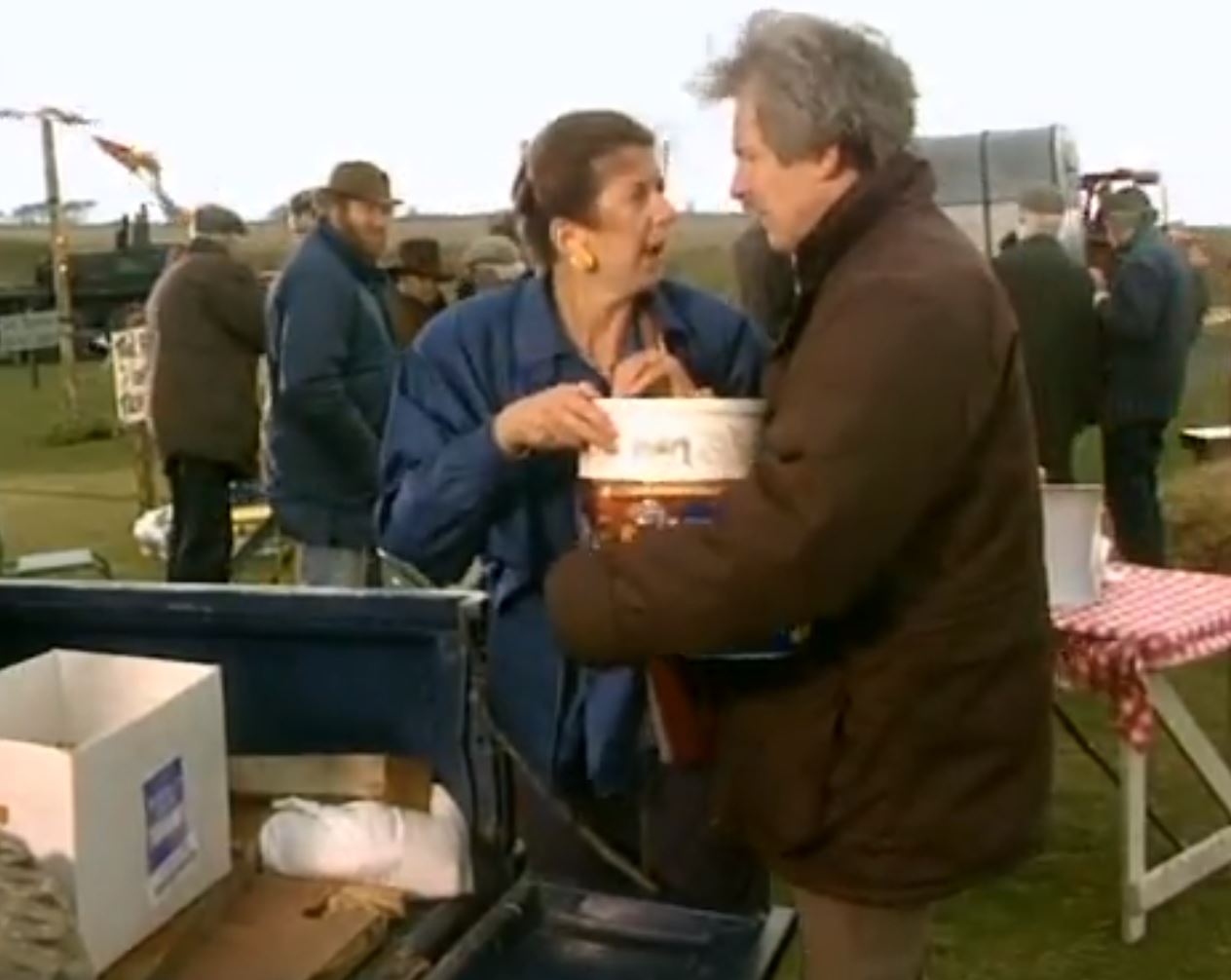 "They would act as if everything is grand, but once the priest leaves, it’s back to this horrible marriage. That thing in Ireland about pretending that everything is fine whenever you’re in front of a priest," said Matthews.

The writers also said that they deliberately chose not to give John and Mary any kids because it would have made things far too sad.

On a lighter note, “you’ve a face like a pair of tits” is an iconic insult that’s still quoted on a regular basis, something that Matthews is quite proud of.

During the Far, Small Away: The World of Father Ted documentary, he described that famous insult as “beautiful writing” and a “tremendous boost to Irish culture.”

In terms of the actors that played John and Mary, they found their scenes to be quite difficult to film.

“I remember it being quite challenging, being so spiteful and horrible and violent to each other. Then suddenly, you have to pretend to be benign and loving,” said Patrick Drury (John).

As for Rynagh O'Grady (Mary), she said at the time of the shows release "there was great debate about ‘is this absolutely mad?, or is this funny?'”

Graham Linehan has a blink and you’ll miss it cameo in the episode. He’s in the back of Funderland at a hidden attraction that we didn’t see called ‘Goading The Fierce Man.’

He’s wearing a bobble hat and red jacket. Aside from Freak Pointing, The Pond of Terror, and The Spinning Cat, there’s another attraction called ‘Duck Startling’ that we didn’t get to see. 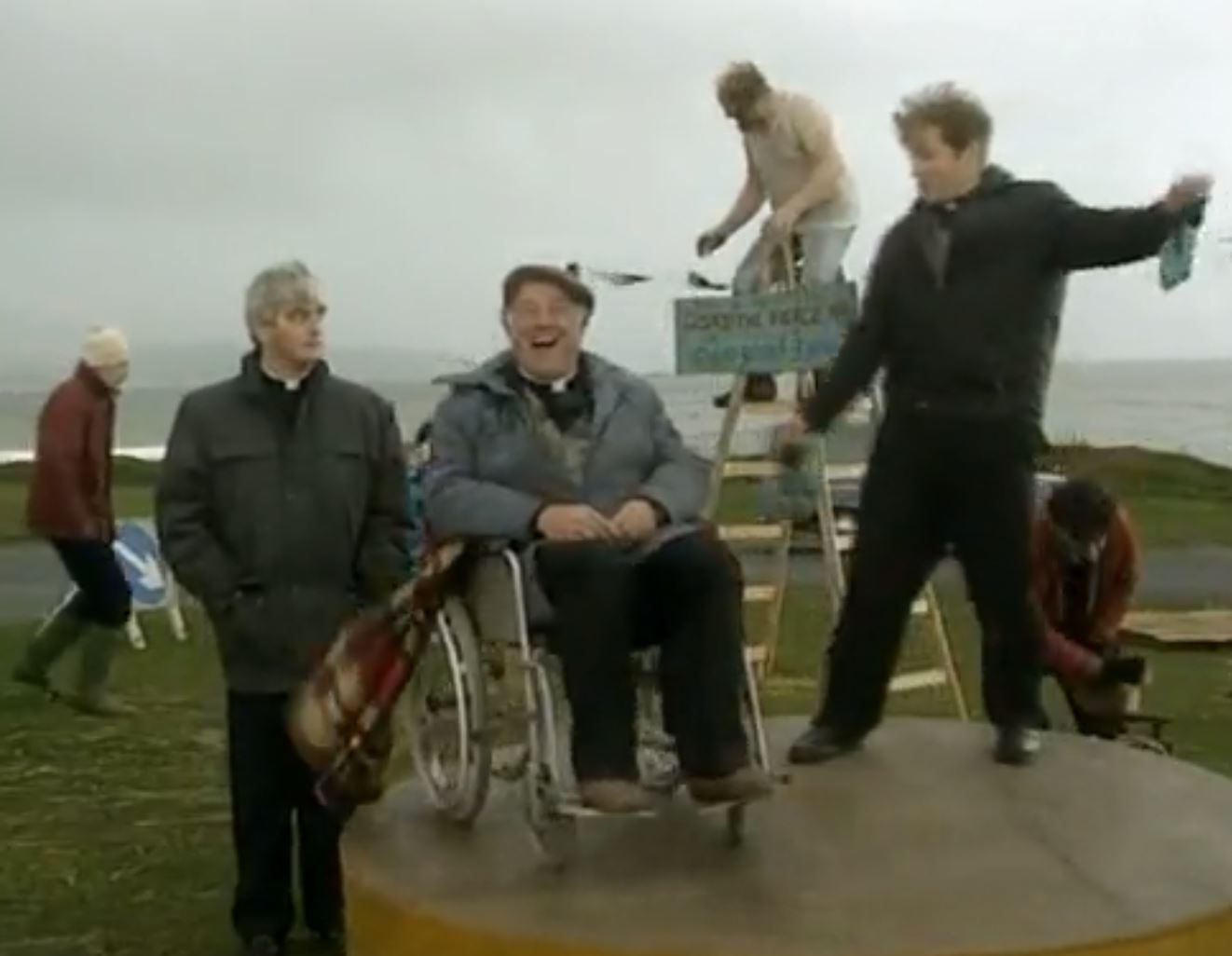 "First, you must cross my palm with silver"

A bit of a continuity error. When Ted and Dougal are outside the tarot readers tent, it’s nighttime. When they leave, it’s the day again.

She’s played by Blanaid Irvine and the actress also played another character in the show, Mrs. Sheridan in The Passion of Saint Tibulus.

In that episode, she got to utter the immortal line: "Yes, he got his lad out. Only, you only see it for a second but you get the message." 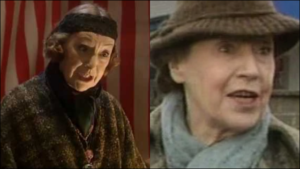 God, does he even exist?

On the DVD commentary, Linehan said that hates the music when we see Dougal daydreaming about the 'dreams vs reality' scenario, before he’s interviewed on the TV.

The writer is also bugged by the fact that when Jack throws the whiskey bottle at the TV near the end, he misses the TV.

The tunnel of goats

Arthur Matthews is the man that narrates the tannoy system about the tunnel of goats.

Linehan has stated that: "A lot of people in Ireland didn’t know what to make of the first episode. It’s after the season went on that they started to get used to it."

Linehan even went on Right To Reply to defend accusations that the show was anti-Irish.

While this was the first Father Ted episode broadcast, it was not always intended to be; the writers originally planned to air " The Passion of Saint Tibulus " first, but later decided that 'Good Luck, Father Ted' would make a better introduction.

The opening exchange between Ted and Dougal in the first episode is "Morning, Ted!" and "Morning, Dougal!".

The very last episode of the show ends with them saying "Good night" to each other.

Things could have been so different...

Father Ted didn’t start life as a sitcom at all, it was a documentary series about six different Irish characters and Ted was one. Here’s a look at the original script. 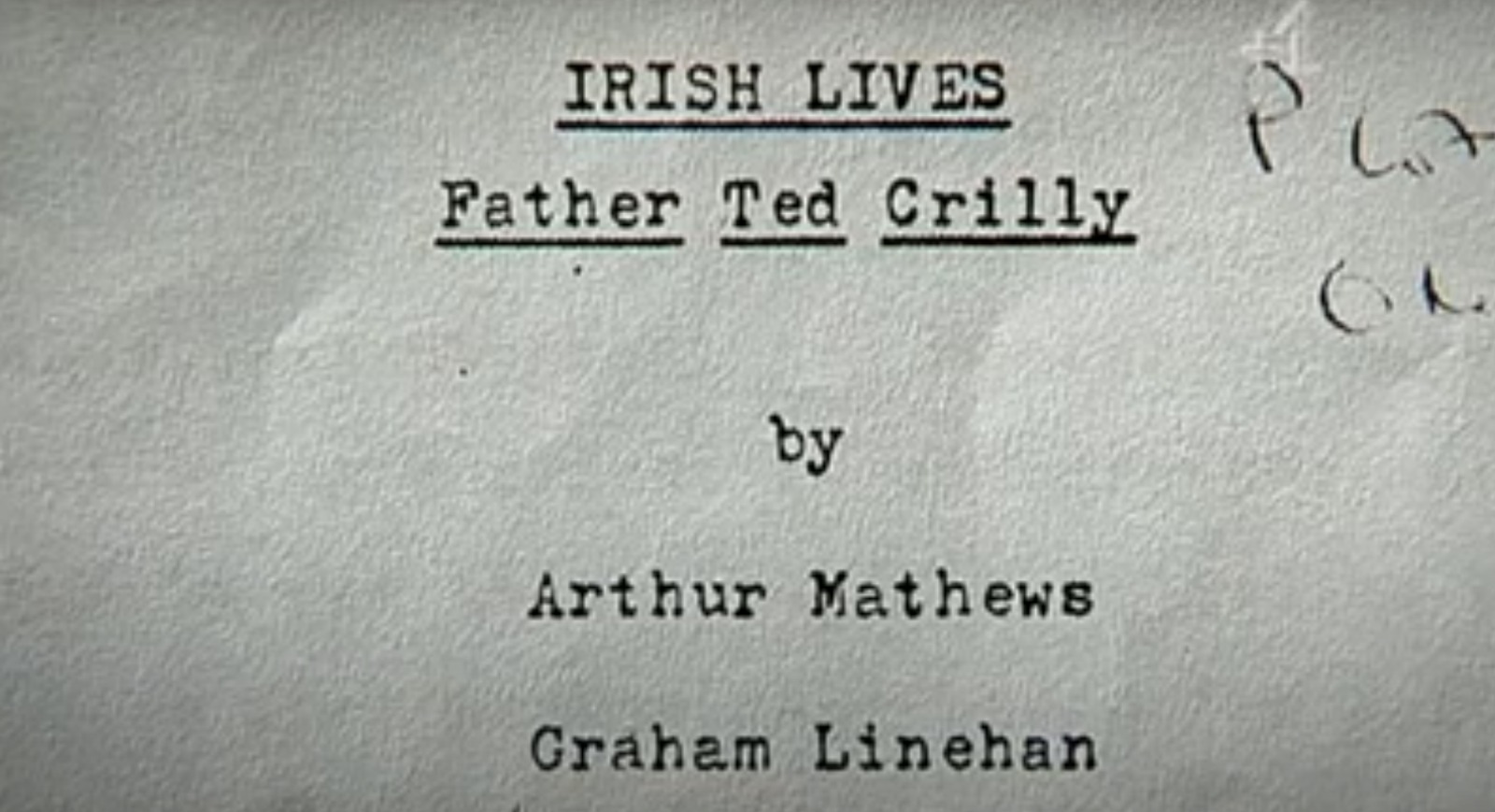 The mission statement was to create “an Irish sitcom with the insanity of The Young Ones, the cleverness of Blackadder, and the farce elements of Fawlty Towers. It also needed to have all that Irish madness that gave us our voice,” according to Linehan.

The idea of Father Ted first came to the writers when they were living in Ireland. Matthews performed as a stand up character called Father Ted and he would appear at gigs as part of a comedy trio called The Joshua Trio - who were a parody of U2.

In fact, you can see a poster of The Joshua Tree above Dougal's bed in the opening episode. 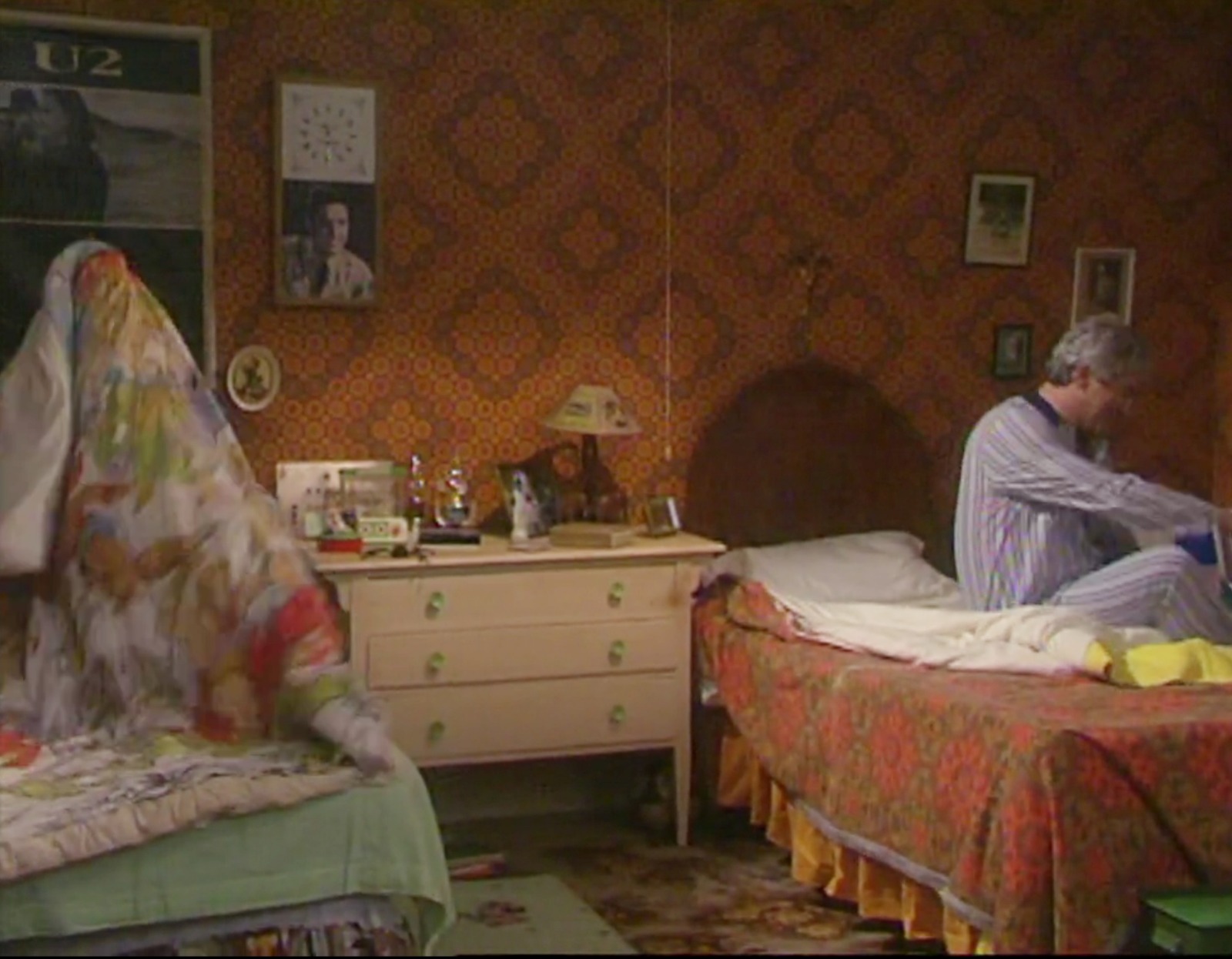 Father Trendy was a hip priest that would appear on the Mike Murphy show and Morgan’s performance left a lasting impression on the creators of Father Ted.

“We liked his manner as a priest. Ted is probably a mix of Arthur’s Father Ted and Dermot’s Father Trendy,” said Linehan.

“Dougal came about because we needed a foil and we loved the stupid character in any sitcom - Homer, Trigger. We just wanted to keep up that tradition. It’s really easy to get to funny lines when you’ve a stupid person involved. Dougal’s inability to understand anything is very helpful to us,” said Matthews.

Jack is the writers’ take on the older, more traditional Irish priests because he’s a throwback to the horrible, mean-spirited version of religion that some older priests embodied.

As for Mrs Doyle, she’s a parody of Irish friendliness but she’s also based on Linehan’s mother and relatives - especially her inability to take no for an answer.

"If you want to meet priests your own age, or simply, have a bit of a laugh…"

Matthews’ real life uncle was a priest and the writer always felt that this picture summed up the spirit of Father Ted.

It might come as a surprise but the show never used canned laughter.

However, on reflection, Linehan has said that he’d like to cut out some of the laughs in the first episode because he thinks audiences still believe that the laughter is canned.

Well, it’s still one of the greatest comedies of all time and a mainstay of Irish culture and daily life. 26 years since its premiere, we salute every single person that graced Craggy Island.

Who wants to see The Rewind cover the next 24 episodes of Father Ted in such ecumenical and mad detail?

SEE ALSO: A Definitive Ranking Of All 89 Priests In Father Ted 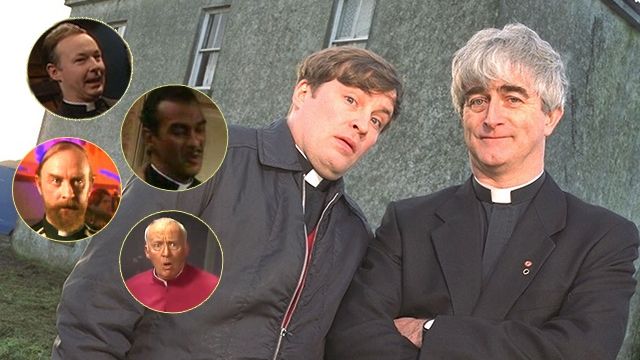