And so it has come down to this. After an epic journey, unheralded drama and many sleepless nights, we have our Ireland's Greatest YouTube Video final. And what a line-up!

The semi-finals were of the highest quality: 'Castletown Donkey Derby 1994' vs 'Eamon Dunphy Calls Out Rod Liddle' and 'I'll Have Sex Tonight and Everything' vs 'What's Snots?'. No matter who emerged from the two matches we were going to have a great contest. But who would actually make it?

Voting ran across the weekend with the Donkey Derby vs Dunphy particularly close. When the Instagram polls closed on Saturday they were virtually inseparable, separated by just 29 votes. Dunphy was narrowly winning the Twitter vote but the Donkey Derby's onsite performance meant that as of 10am on Monday it was actually in the lead overall. However, somehow, some way, Dunphy pulled it out of the bag again.

A late surge from his supporters saw him scrape over the line, with an overall margin of 52% vs 48%. This was the third time in his four matches to date that he grabbed a victory out of nowhere. Like the Italians in the 2006 World Cup, Dunphy has bundled his way into a final and who'd bet against him winning the whole thing!?

In the second semi-final 'What's Snots?' was yet again well beaten on Instagram. Its campaign team wasn't counting on winning that constituency however, given its poor performance throughout the week. They were more concerned with the onsite vote and right they were, too. The Den classic comfortably won onsite and in doing so secured the other final spot, with 57% of the vote.

While 'I'll Have Sex Tonight and Everything' will be disppointed to miss out it can take pride in its incredible run, as the only unseeded video to make it past the quarter-final. 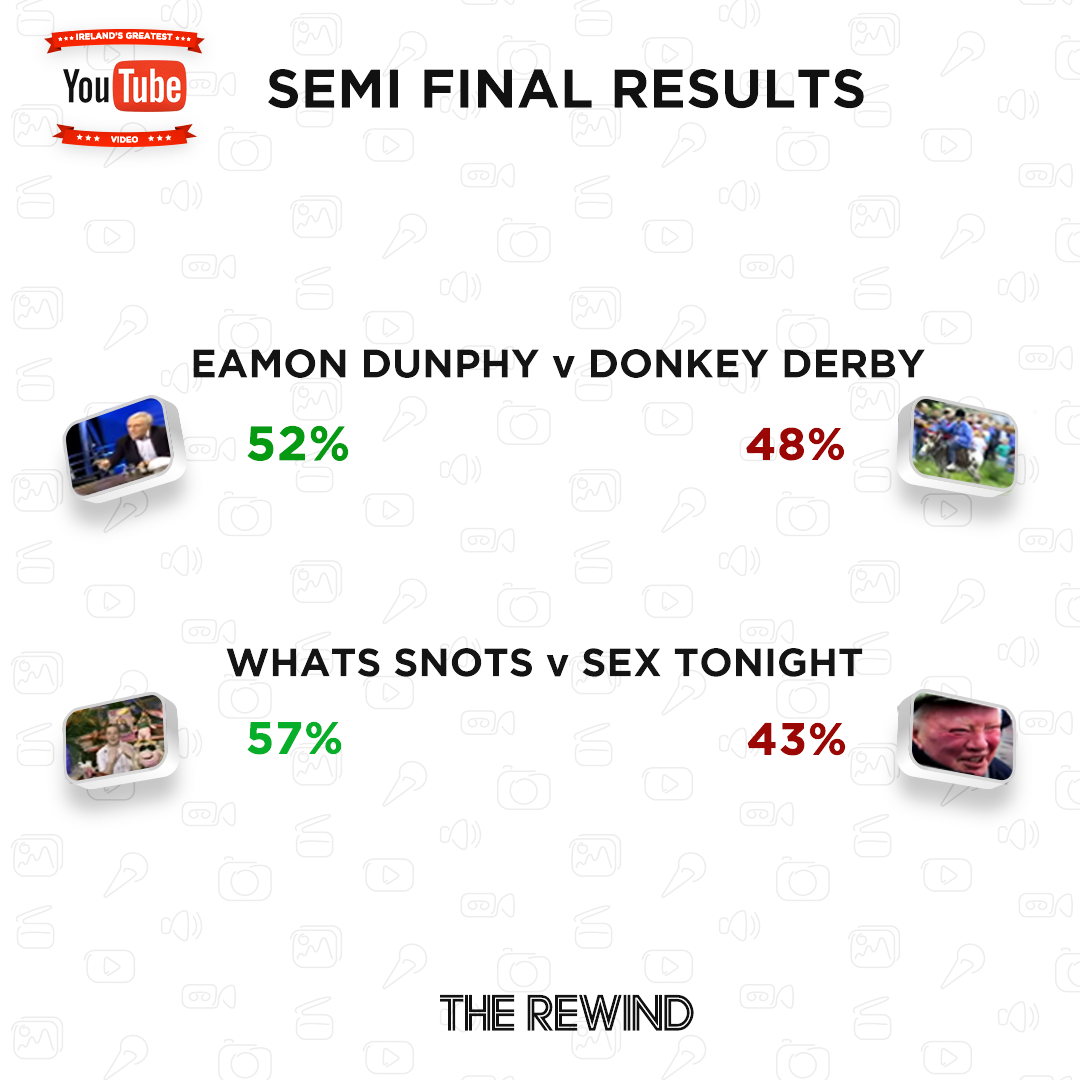 'Eamon Dunphy Calls Out Rod Liddle' vs 'What's Snots?' One is a video where someone comes on air, ranting about everything and anything while two confused puppets watch on, the other is a funny clip from a kids' TV show. 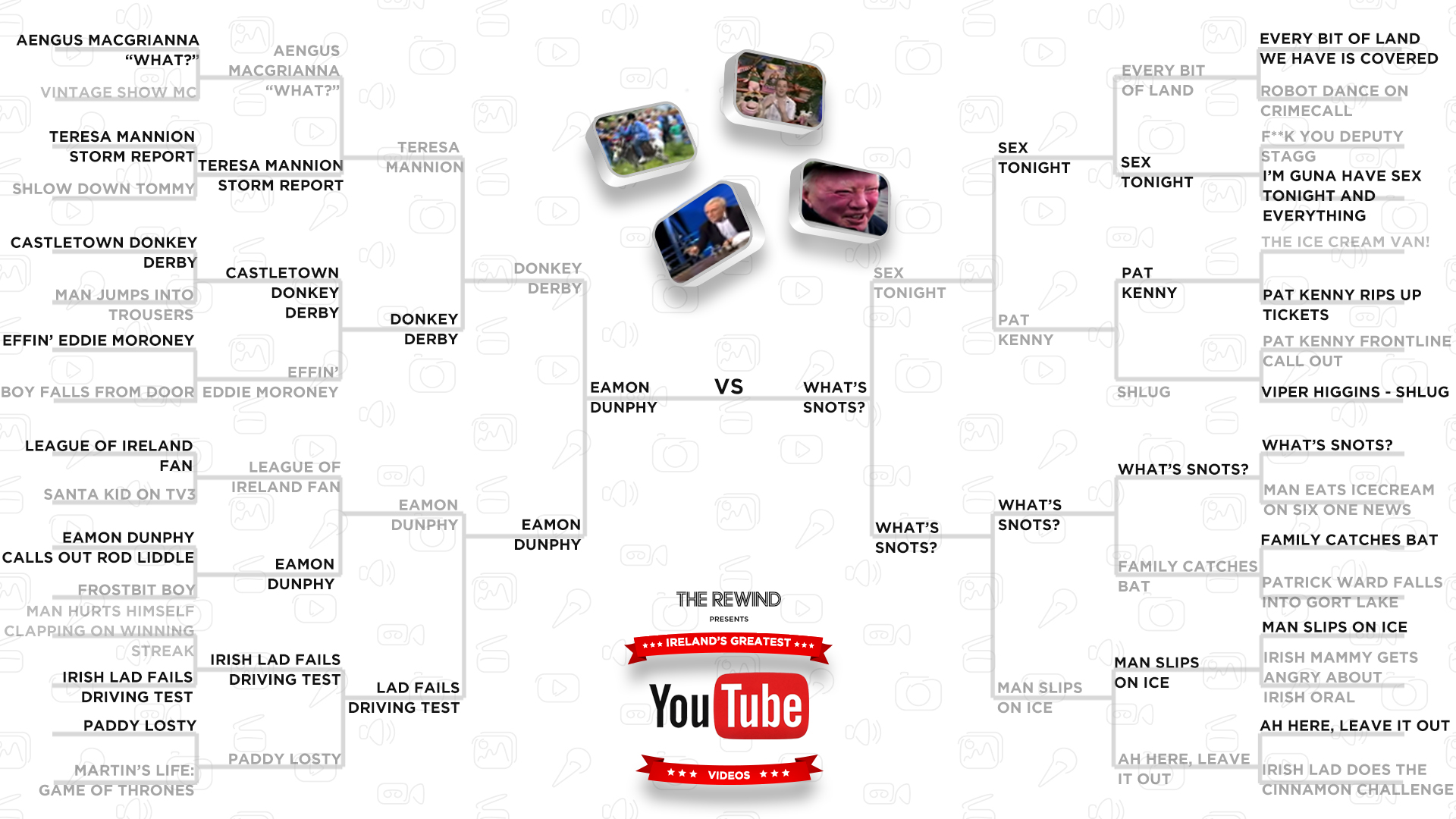 The final vote will be open below, on Instagram and on Twitter until 3pm tomorrow, Tuesday, 15th of July, with the overall winner being announced shortly after. Who wins? You decide!

The Rewind
6 months ago
By Fiachra Gallagher
"Guy Was An Interior Decorator!": 20 Years On From One Of The Best Sopranos Episodes
The Rewind
7 months ago
By Balls Team
The Much-Requested And Long-Awaited 'Space Jam' Player Ratings
The Rewind
8 months ago
By Sean Meehan
Ireland's Greatest Singalong Song - Semi-Finals
Previous Next

The Rewind
6 months ago
By Fiachra Gallagher
"Guy Was An Interior Decorator!": 20 Years On From One Of The Best Sopranos Episodes
The Rewind
7 months ago
By Balls Team
The Much-Requested And Long-Awaited 'Space Jam' Player Ratings
The Rewind
8 months ago
By Sean Meehan
Ireland's Greatest Singalong Song - Semi-Finals
Popular on Balls
Football
17 hours ago
By Jonathan Browne
Reports: Solskjaer's Coaching Staff To Stay On At Old Trafford As Rangnick Appointment Confirmed
Snooker
19 hours ago
By PJ Browne
Selby Crashes Out Of UK Championship On Dramatic Respotted Black
Snooker
1 day ago
By PJ Browne
Shaun Murphy Apologises Over Timing Of 'Amateur' Comments
33

GAA
18 hours ago
By PJ Browne
Can You Get 9/9 In Our Quiz Of The Club GAA Weekend?