Ranking The Gift Grub Sports Songs We Can Remember

Admittedly in danger of shedding too much light upon magic, this article began with an idle (virtual) office conversation about Alan Smith, in which more than one of us wondered "how Alan Smith's a midfielder". This is, of course, a line from the classic version of Leave Right Now sung by Mario Rosenstock's Roy Keane on Gift Grub, the long-running slot on Ian Dempsey's Breakfast Show.

It's been running a remarkable 22 years by now, but hit a golden period between roughly 2004-2007, so here we count down the greatest sports songs to feature on the slot.

Get in touch to tell us how wrong we are.

(We've done our best to include songs by anyone other than Roy Keane, but we admit that it wasn't easy. He's by far the best character).

Individual moments from Keane's career led to some classics, but this effort set to an utterly mental Chris De Burgh song about Jesus perhaps being an alien told the story of his career from that MUTV interview, and is superb.

Best Line: "And he buried the hatchet with the lad from Barnsley".

Best Line: "Rocked up to Harlequins to a place called the Stoop, yo/ Anybody that said we'd win was talking through their hoop, yo"

Bill Shankly had a line on football's Holy Trinity: players, managers, and fans. This was more pointed toward those absent: the board and chairman. Jose Mourinho's first Chelsea spell ended in the sack for clashing with Roman Abramovich, as the Russian meddled with the ancient forces of Shankly's teaching. Poor Andriy Shevchenko found himself at the heart of the struggle.

Best Line: "You think it would be cool/To pick him for Liverpool/Don't be a fool".

Another Keane song, this time a serenade for Il Trap.

Best Line: "You might even improve the likes of Andy Reid-y../ Although maybe not John O'Sheeaaaaaaa"

It was perhaps Steve Staunton's misfortune that his Louth drawl was so easily mimicked by Rosenstock, but it was good for everyone else. Here is a song a band called The Stans dedicated to one John Delaney, ahead of a qualifier against Slovakia.

Best Line: "It's a pity it's so far/We're missing you and Steven Carr/So we are."

England had just lost to France in the opening game of Euro 2004, losing 2-1 to two Zidane goals in injury time. Steven Gerard bore some of the blame with a dreadful backpass late on, but Beckham missed a penalty to seal the win for England. Beckham, then a teammate of Zidane's at Real Madrid, greeted him with a kiss in the tunnel ahead of the game.

Best Line: " Dry your eyes mate/ But as I said before, like / There's plenty more games in Group B"

A hirsute Keane is on the verge of the sack at Sunderland, as Premier League struggles hit home. Now is a time for painful introspection, on the unique condition of Being Roy. Featuring Niall Quinn, Mick McCarthy and one of the members of The Stans.

Best Line: "If I wasn't Roy/ I also might wonder / How I bought a bunch of Langers/ Like Cissé and Chimbonda/

The Staunton era is no more, and Rosenstock pulls out the stops as Stan and Bobby Robson in an Eminem special on Tubridy Tonight.

Best Line: "Remember Cyprus, 5-2?/ When they started saying I didn't have a Scooby Doo?/ Or how could we know/ that we'd nearly lose to the likes of San Marino"

Such was this song's success from Mourinho's debut season at Chelsea, Rosenstock ended up performing it for Mourinho and the Chelsea squad. We too are shocked that Mourinho would like to see himself on stage, too.

Best Line: "They all are hating/ I like rotating/ Any team will do"

It's 2005, and Keane's storied career with Manchester United. It's the spark for perhaps the best song in the sketch's history, as Keane sings to Will Young's Leave Right Now.

Best Line: "All credit to the time it's flown/ Remember how I beat Juventus on me own / The greatest midfielder of his era/ Are you listening Patrick Viera?"

Martin and Roy do Something Stupid:

Sadly, this ode to Paul Simon's 50 Ways to Leave Your Lover is no longer online. It featured Stan and Bobby Robson again. How was Mario to know Ireland would need a 51st way to beat San Marino, in the shape of a Stephen Ireland winner in the deepest of injury times?

If we remember correctly the chorus went along the line of, "Get on the ball Paul, put us in the lead, Reid. Give it McGead-y, and we can win it by three! Yes we can!"

SEE ALSO: 'Do The FAI Take Us For Morons?': Remembering The Week Steve Staunton Became The Gaffer 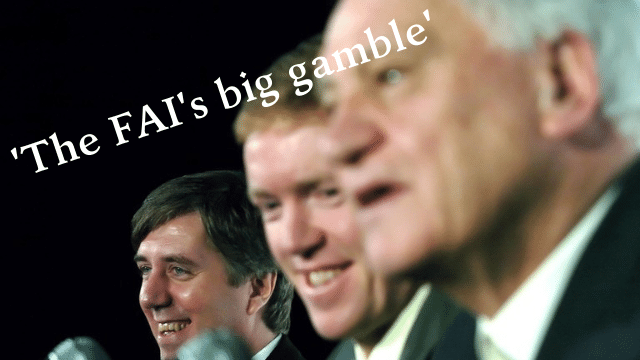