42 of the 50 most watched TV shows in Ireland last year were broadcast on RTÉ.

2019's edition of The Late Late Toy Show was by far the viewed programme, garnering an average audience of 1.54 million. That was nearly 600,000 more than the All-Ireland football final replay between Dublin and Kerry, which is second on the list with 991,000. The drawn final between the two teams is third on the list.

Seven live sporting events feature in the top ten. Along with the football finals, there is also the hurling final, the football semi-final between Dublin and Mayo, Ireland's Six Nations games against England and France and Ireland's Rugby World Cup quarter-final against New Zealand.

The top ten is rounded out by an episode each of 'I'm a Celebrity Get Me Out of Here' and 'Room To Improve'.

The eight programmes in the top 50 which were not shown on RTÉ were broadcast by Virgin Media.

The list below, provided by RTÉ, erroneously names Galway as a hurling finalist this year. The game was contested by Tipperary and Kilkenny. 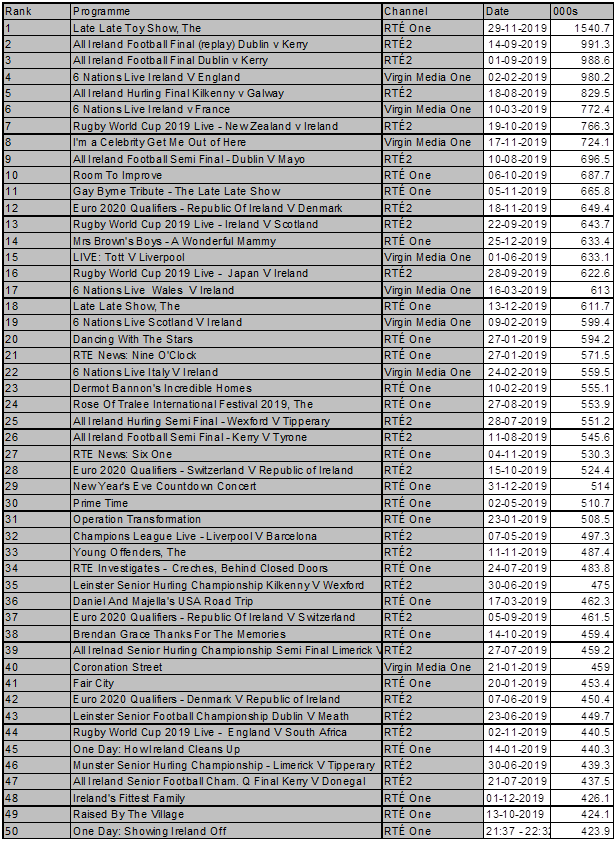