"Wait a second, these are fake hands!"

You couldn't make this up. According to reports - an Italian man tried to pull a Father Ted by having his Covid-19 vaccine administered into a fake arm.

The man showed up at the health practice with a realistic-looking prop that was supposedly made of silicone and resembled the man's skin colour.

Health workers at the facility weren't fooled by the stunt. The man has since been reported to authorities in Italy and will likely face some sanctions.

It comes as Italy tightens restrictions on the unvaccinated in their country. While we have plenty to contend with here at home - many can't help but make the same joke.

The man in question has brought to light a slew of Father Ted references. People think it's similarly aligned to Father Ted's antics in 'Escape From Victory'.

That episode has gone down in the history books as one of the greatest pieces of comedy television of all time. The use of Ted's 'fake hands' is a clever subplot.

During the match, Ted utilises some peculiar items to his advantage inherited from Fr. Niall Haverty who had purchased them for the late Fr. Nick.

Fr. Jack finds himself in a deep sleep after downing a bottle of 'Dreamy Sleepy Nighty Snoozy Snooze.' Ted mobilises him in an electric wheelchair for the game.

He uses the fake hands to manoeuver Jack from behind his coat on the sideline. Jack scores the decisive goal to take it home for Craggy Island.

Then a young Jason Byrne, who plays the referee, unveils the truth behind the win and spots Father Ted's 'fake hands'. The victory is then annulled.

This led to the infamous scene of kicking Bishop Brennan up the arse later in the series with the whole episode going down in television folklore.

Reliving the events of 'Escape From Victory' has brought about some much-needed humour. 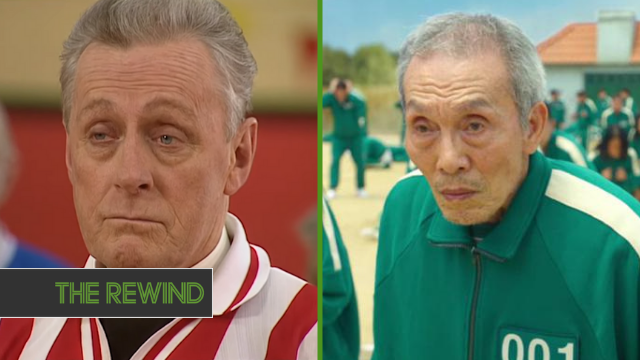 The Rewind
2 days ago
By Gary Connaughton
People Were Absolutely Astounded After Last Night's Derry Girls Finale
The Rewind
1 week ago
By Luke Delaney
How To Watch Conversation With Friends In Ireland
The Rewind
1 week ago
By Eoin Harrington
Watch: Brilliant Dermot Morgan Dublin Segment From 'The Travel Show' Resurfaces
Popular on Balls
Football
7 hours ago
By Eoin Harrington
Juan Mata Questions Manchester United Management After Dire Season
Golf
2 days ago
By Gary Connaughton
Padraig Harrington Glad He Didn't Have To 'Make A Decision' On Saudi Golf League
Football
1 day ago
By Gary Connaughton
The Frank Lampard Love-In After Everton's Survival Was Downright Bizarre
GAA
2 days ago
By PJ Browne
'It Came At An Awkward Time. I Didn't Think It Would Be So Bad'