It is fair to say that the Government's minimum pricing for alcohol plan introduced in recent days has not gone down well across the country.

Brought in to curb drinking levels in Ireland, it saw the price of many brands of alcohol shoot up overnight. Gone are the days of going down to your local supermarket and picking up a cheap slab of cans or bottle of spirits on offer.

The main criticism of this policy is that many believe that it will not actually reduce alcohol consumption and instead disproportionately affects those on a lower income. The fact that those living on the border of Northern Ireland can go a few minutes up the road and buy the same products at a much lower rate is also worth noting.

However, some people managed to take advantage just before this system was introduced on January 4th.

Speaking on RTÉ's Liveline, caller Brendan revealed that he went into a local store and bought 500 cans of Guinness on the eve of the new rules. He reckons he saved himself around €700 by doing so.

I'm in receipt of social welfare and it's going to disproportionately affect me. I had my savings.

The day before the minimum pricing came in, one of the local small retailers had a special offer on Guinness. It was a 12-pack for €10.

I fairly stocked up, so I should have enough to do me for at least a year. I got around 500 cans...

I'm in receipt of social welfare, so that's nearly a month of income...

I got a few funny looks (in the shop). I find that there's a discriminatory regulation on the poor. I don't know if they carried out any studies that alcoholism doesn't affect wealthy people and only affects the lower classes.

There is no other measures brought in to roll this out across society. It's just discriminating against lower income and poorer people.

You can see the evidence of the purchase below.

Brendan saved €700 buying 500 cans of Guinness on the Eve of minimum pricing!! pic.twitter.com/zqO8dD8tGf

That's what you call getting ahead of the curve.

The cans will surely taste all the sweeter knowing that you saved that much money when buying them.

SEE ALSO: An Iconic Dublin Pub Has Made A Bizarre Appearance In Taiwanese Army Drill 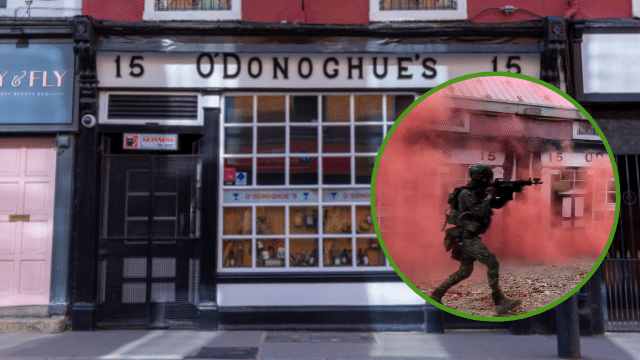 The Rewind
1 month ago
By Jonathan Byrne
Giant Silver Ball Rampages Through Bray As Joe Duffy Demands Answers
GAA
5 months ago
By Gary Connaughton
Liveline Caller Says Kerry Players Are Disgracing The GAA By Having Tattoos
The Rewind
6 months ago
By Eoin Harrington
Liveline Caller Says Its Hard To Be An England Supporter In Ireland
Popular on Balls
Basketball
22 hours ago
By Eoin Harrington
Kieran Donaghy And Tralee Warriors Claim National Basketball Cup Title In Tallaght
Football
1 day ago
By Gary Connaughton
Carragher Reveals Unhappy Instagram Message From Lionel Messi After MNF Comments
The Rewind
1 day ago
By Gary Connaughton
Quiz: From Which Irish County Did This Company/Product Originate?
Football
2 days ago
By Jonathan Byrne
Women Footballers Call Out 'Embarrassing' Sun 'Exclusive'