Matt Damon Has Plans For Big Irish Trip After Pandemic

The attention he received for being pictured with a SuperValu bag while out for a swim in South Dublin last year surprised Matt Damon. The actor spent six months living in a locked down Dalkey while filming 'The Last Duel'.

"I was so surprised by all of it," Damon told David McWilliams in an interview for the Dalkey Book Festival.

"Listen, if any of us Hollywood types knew that, you’d see everybody turning up with those SuperValu bags wandering around trying to get their picture taken.

"I took a picture with someone. It wasn’t even like a paparazzi shot or anything, because there weren’t any of those. It was just someone who I grabbed a picture with, and I was holding the bag. I mean, when you’re living there, that’s where you shop."

When all of this has settled, the images of Matt Damon carrying his groceries in Supervalu bags, as he self-isolates in Dalkey, will be the ones to dig out. pic.twitter.com/r8gYGUyfvn

The 50-year-old was speaking from Australia where he is filming Thor: Love and Thunder.

"One of my daughters said to me just the other day, out of the blue, 'You know, I could live in Ireland'," he said.

"It was such a strange time. We got there just as the lockdown started and lived there for three months. We went back to finish the movie, and lived under even more Draconian rules for our production - we didn't want anyone to get sick.

"It's funny that [my children] loved it so much. Maybe it's because we didn't do any sightseeing, because we couldn't. It just felt like a normal routine to them. They really just lived there as locals for six months of last year.

"We did make a deal [with our children] both times we left Ireland saying we’ll come back and finish the movie, and then we’ll get to travel.

"We had a plan to take a caravan all around the country. We had all these grand plans and then the second time it was straight into lockdown again, and then we had to leave again.

"So we made a bargain with the kids that when this all ends, we’re going back, and we’re gonna do our trip. We all really want to do it.

"We just felt comfortable there. That town is so beautiful and we’re just walking up Killiney Hill, walking over to Mugs [Cafe] and getting coffee. It was just the best.

"I even got a pint at Finnegan’s before they shut. Like the day before the lockdown, I went over and had one pint so and then it was closed literally the rest of the six months that I was there. But Lucy and I did get one pint there.

"And I hope to come [to the Dalkey Book Festival] in person next year. That would be great.”

Chatting to Matt Damon now. A sound lad. Great fun too. If you want to film a gig, produce it and do it as professionally as possible I'd advice you to to use @FuelHQ_ they've been amazing as a production company for start to finish. Thanks so much to everyone behind the camera. pic.twitter.com/eeDnTrTx4h 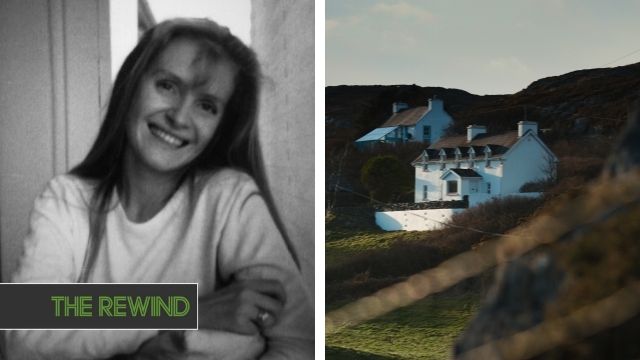 The Rewind
1 year ago
By Michael McCarthy
Matt Damon Isn't Gone A Week And Dalkey Is Already Falling Apart
The Rewind
1 year ago
By Balls Team
Woman Tells Great Story Of Accidentally Shouting "Hellooo!" At Matt Damon In Dublin
Popular on Balls
Rugby
4 hours ago
By Jonathan Byrne
Watch: Wayne Barnes Takes No Prisoners Sending Off Stade Player For Mouthing
Football
1 day ago
By Gary Connaughton
Carragher Reveals Unhappy Instagram Message From Lionel Messi After MNF Comments
The Rewind
1 day ago
By Gary Connaughton
Quiz: From Which Irish County Did This Company/Product Originate?
Football
2 days ago
By Jonathan Byrne
Women Footballers Call Out 'Embarrassing' Sun 'Exclusive'