The legendary rock musician was most widely known for songs like I'd Do Anything For Love and Bat Out of Hell, with the same-titled album still one of the highest-selling of all time.

In a statement, his family said, "His amazing career spanned 6 decades that saw him sell over 100 Million albums worldwide and star in over 65 movies."

It's fair to say Meat Loaf was a man of many hats and one of those hats began to emerge on social media. Many started to tell the story of his ties with Ireland.

This album sold 40 million physical copies.
The equivalent of every man, woman, and child in Ireland each owning 8 copies of it.
That is how important Meat Loaf was, and that's only one album.

Author Ronan Cassidy has a fantastic piece on a Meat Loaf gig in Moate, Co. Westmeath back in the late 1980s. He tells the story brilliantly.

Meat Loaf was going through a rough patch in 1989 and had released a few questionable pieces of music at the time. His popularity had dipped in the States.

That didn't put off promoters in Ireland, however, as the thirst for an established act on the Emerald Isle was still as strong as ever.

Cassidy recalls that the people of rural Ireland came out in their droves to see Meat Loaf in parish halls, ballrooms, and community centres.

He said that local promoters were keen to make a quick buck, so they piled as many people as they could into the venues to get value for money.

Unfortunately, during one show in Moate, things got a bit out of hand. People started flinging shoes onto the stage and Meat Loaf was getting fairly pissed off.

It eventually led to a wheelchair being thrown towards the stage and the man himself decided to storm off for his safety.

Meat Loaf recalls the Irish tour in his memoir 'To Hell And Back'. This was what he had to say on the whole thing:

In 1989, we also did nineteen towns in Ireland. We toured Ireland more than U2. There are not that many Irish bands other than the Irish folk bands that travel around. We were going to all these tiny little places and playing these shows where no one had ever made the effort to go before. It would take us forever on these tiny Irish roads in these really rickety old buses to get from one city to the next. You would have to stop the bus to let some little donkey cart pass by or let a flock of sheep cross the road. We stayed in a lot of old mansions where there were ghosts and things that go bump in the night. Some of these places were so small that the local promoter might be a farmer or the pub owner. At one place it was the parish priest.

This one-story paints the picture of what some of the gigs were like in the Irish countryside:

We pulled up to this one gig and there wasn't a house or another building in sight. Just a big barn in the middle of a field. I was looking around and saying to myself, "Okay. Who is going to come to this?" They were still emptying the hay from the barn when we arrived. They had put a stage down at one end. I went inside and everybody was just standing around. I said, "Are we ready for a soundcheck?" They said, "Not quite. You see, the building has no power. And the thing of it is nobody thought the barn having no power, this being the first time we've had a rock band here." Okay, no soundcheck. The doors open and people are coming in. By 7:30pm, there were easily three thousand people crammed into this building and we still had no power. Eventually, they had just enough power to run about three or four light bulbs on the ceiling. I know there were a few lights because we could see the people. At 8pm, the generator shows up and saves the day.

Then there's a gig Meat Loaf did in County Antrim, which seemed crazy at the time, but he recalls how they managed it:

When we crossed the border from Ireland into Northern Ireland, we weren't aware how intense the feelings were between Catholics and the Protestants. At one point Leslie got off the bus to walk around and when the promoter caught sight of her he was absolutely mortified. "Are you wanting to be shot?" he asked. "Do you understand what you're doing? You are wearing orange and it is such-and-such a day and this is a county that is completely Catholic and, well, that orange you're wearing is like a red flag to a bull." She had to go change her clothes. She was offending the whole town. We had IRA members secretly on the bus with us in plain clothes and we had the British Army in troop transports in front and behind our tour bus. The promoters had somehow worked out an agreement between the IRA and the British Army. They were working together to make sure no harm would come to us. We stayed at this hotel in Belfast called The Forum, and the place was completely surrounded by tank barriers and barbed wire. It was like being in Beirut. I remember driving from the radio station to another hotel, in County Antrim in the country. There were English Army troops everywhere in open lap bed trucks with guns at the ready. Leslie thought this would make an interesting photo, so she rolled down the window and started taking pictures. Once again, we almost caused an international incident. You can't take photographs of the Army.

See Also: Can You Complete The Lyrics To These Classic Westlife Songs? 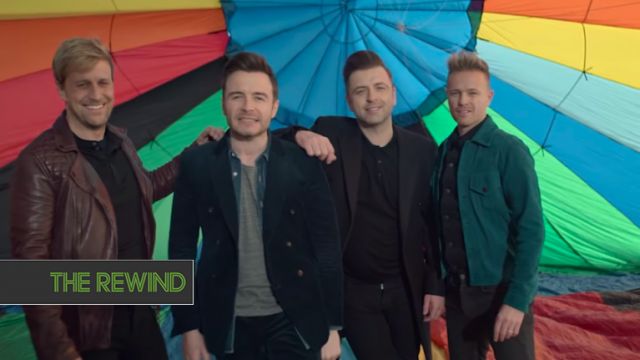