A Load Of Cracking New Movies Have Just Landed On Netflix

September is no exception, with a number of new titles added to the site. Considering the cracking original content that will be arriving over the next few weeks, there will be no shortage of content to keep you occupied.

Here are some of the best movies added over recent days.

After being mistaken for terrorists and thrown into Guantánamo Bay, stoners Harold and Kumar escape and return to the U.S., where they proceed to flee across the country with federal agents in hot pursuit. (IMDB)

In a future where people stop ageing at 25, but are engineered to live only one more year, having the means to buy your way out of the situation is a shot at immortal youth. Here, Will Salas finds himself accused of murder and on the run with a hostage - a connection that becomes an important part of the way against the system. (IMDB)

Three friends attempt to recapture their glory days by opening up a fraternity near their alma mater. (IMDB)

A loyal and dedicated Hong Kong Inspector teams up with a reckless and loudmouthed L.A.P.D. detective to rescue the Chinese Consul's kidnapped daughter, while trying to arrest a dangerous crime lord along the way. (IMDB)

A newly released prisoner is forced by the leaders of his gang to orchestrate a major crime with a brutal rival gang on the streets of Southern California. (IMDB)

A swinger on the cusp of being a senior citizen with a taste for young women falls in love with an accomplished woman closer to his age. (IMDB)

The Guns of Navarone

A team of allied saboteurs are assigned an impossible mission: infiltrate an impregnable Nazi-held island and destroy the two enormous long-range field guns that prevent the rescue of 2,000 trapped British soldiers. (IMDB)

Two salesmen whose careers have been torpedoed by the digital age find their way into a coveted internship at Google, where they must compete with a group of young, tech-savvy geniuses for a shot at employment. (IMDB)

A young boy befriends a giant robot from outer space that a paranoid government agent wants to destroy. (IMDB)

What happens when an epidemic breaks out, but you're kept in the dark? Anything can happen. Slowly the residents realize that they will all die unless they come together. (IMDB) 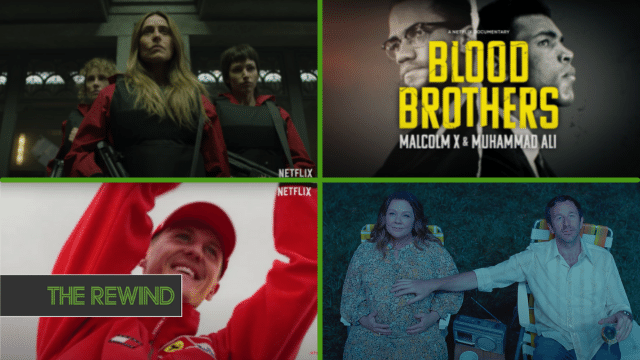 The Rewind
3 weeks ago
By Gary Connaughton
Netflix's Original Release Lineup For September Is Incredible
The Rewind
2 months ago
By Eoin Harrington
The Best Music Movies To Stream In Ireland
The Rewind
2 months ago
By Sean Meehan
7 Of The Best Stand-Up Comedy Specials Available On Netflix Right Now
Popular on Balls
Football
18 hours ago
By Eoin Harrington
Watch: Caoimhín Kelleher Penalty Save Helps Liverpool Through To EFL Cup Fourth Round
Football
21 hours ago
By Jonathan Byrne
The Battle Of Old Trafford: Roy Keane On Why Arsenal 'Crossed That Line'
Football
23 hours ago
By Andrew Dempsey
Shay Given Reveals 'Horrendous' Contract Offer That Forced His Celtic Departure