What a week we've had already. The last 16 ties in the vote for Ireland's greatest YouTube video have been nothing short of a bloodbath. We've seen some heavyweights knocked out, with Paddy Losty losing in the most dramatic of circumstances!

Where do we begin? Comfortable wins for 'Man Slips On Ice' and 'I'll Have Sex Tonight and Everything'.  A few hairy moments for 'Pat Kenny Rips Up Tickets' and 'Castletown Donkey Derby' but in the end their results were never in doubt. In the all-RTÉ News clash, Teresa Mannion romped home, comfortably beating Aengus MacGrianna but here is where the drama begins.

Second favourite with the bookies, What's Snots once again lost the Instagram vote, with 'Irish Family Chase Bat' winning 51% to 49%. However, while it trailed on Instagram, its performance in that constituency was much improved on their first round and it gave the gang a fighting chance overall. The results from Twitter left things extremely close; 86 votes between them. The Balls.ie website votes would tell the tale and with one glance the outcome was clear:  a resounding win for What's Snots, leaving it with a 55% to 45% victory overall.

Their prize? A mouthwatering quarter-final tie with Man Slips On Ice.

But before we move onto the quester-finals let us tell you about the other two last 16 results. LOI Fan vs Eamon Dunphy, a clash of the titans. LOI Fan pulled in the youth audience on Instagram, winning with 54% of the vote, but Dunphy knew that was not his stronghold. He's a man built for Twitter. We're not sure he even knows it exists but users of the platform certainly know he exists. They turned out for him in their droves and those results, coupled with the website vote, left Dunphy with a 51% to 49% win.

'Irish Lad ''Fails'' Driving Test' was beaten by 'Paddy ''45 Pints'' Losty' on both the Balls.ie website and Twitter page, but somehow managed to pull it out of the bag in incredible fashion. When the Instagram vote was taken into account the driving test had sneaked it by just 11 votes. 11 votes! 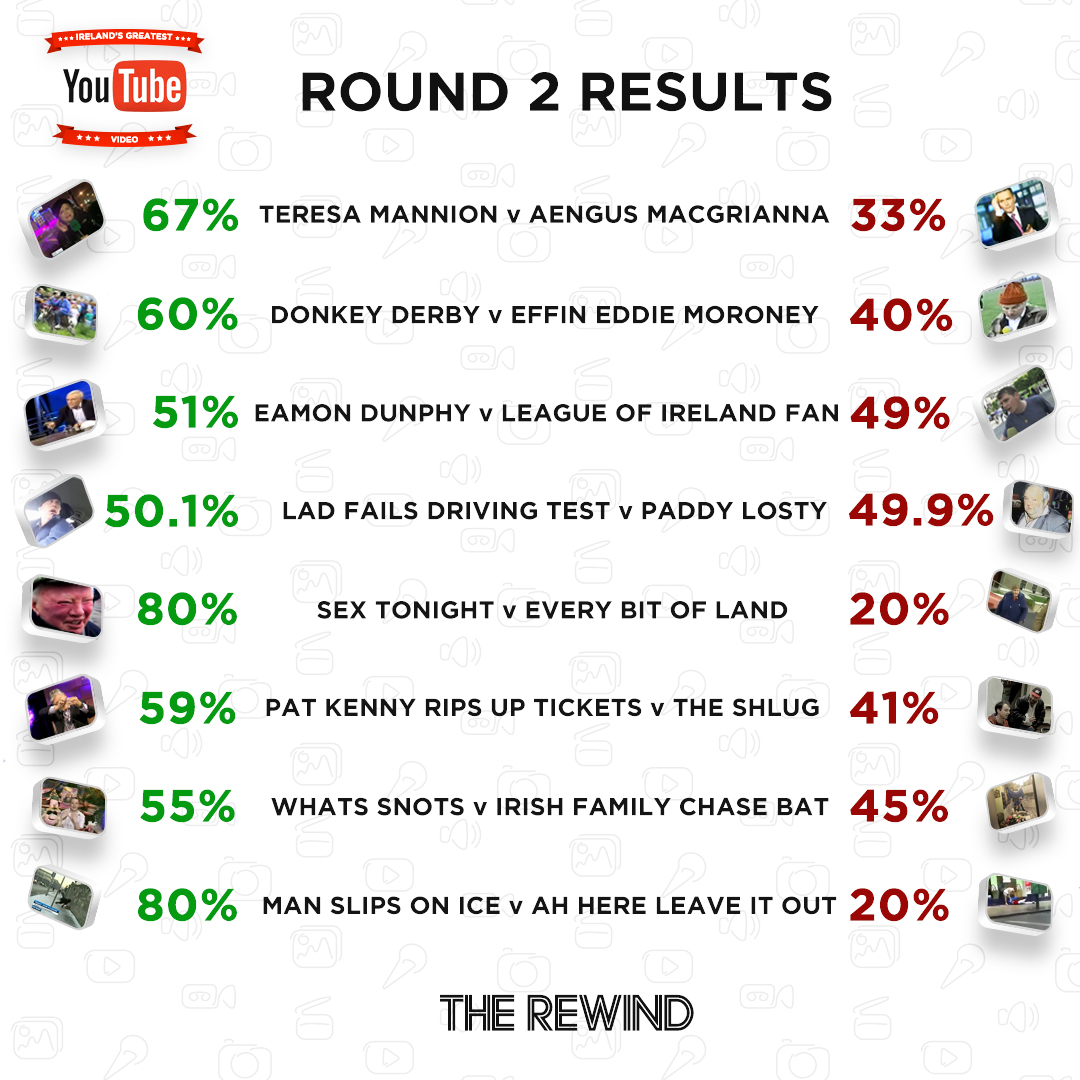 After all that we are left with some ding-dong battles in the quarter-finals. 'I'll Have Sex Tonight And Everything' and 'Pat Kenny Rips Up Tickets' are the only two unseeded videos left in the competition and they will face each other today. Elsewhere, 'Teresa Mannion' will take on the 'Castletown Donkey Derby' and 'Eamon Dunphy calls out Rod Liddle' faces 'Irish Lad "Fails" Driving Test.'

Finally, we have aforementioned tie of the round with the favourite facing the second favourite. It's 'Man Slips on Ice' vs 'What's Snots?' 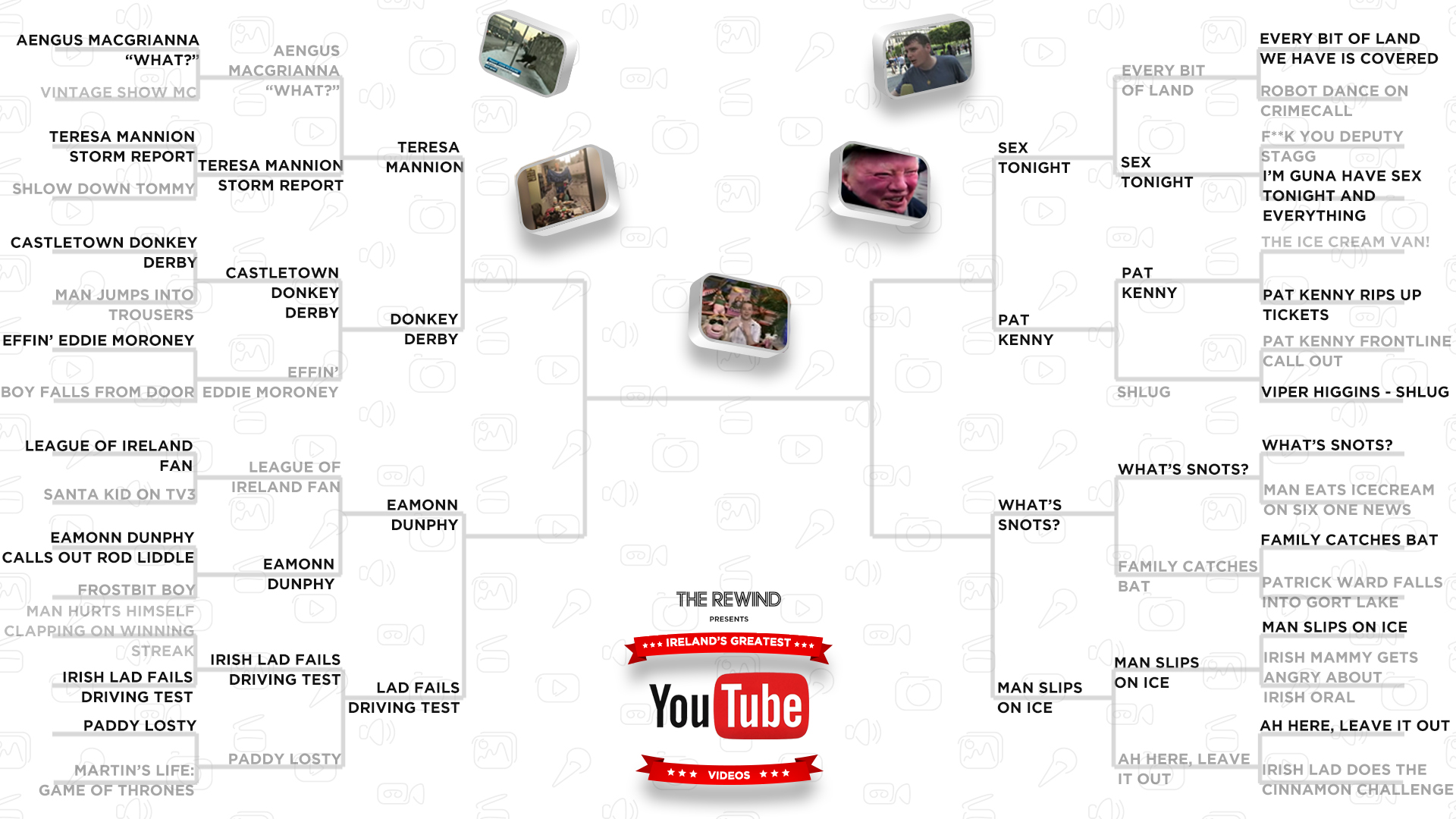 As always voting is open on our website, on Instagram and on Twitter until 1pm tomorow. The accumulative votes for each video will decide the winner in their respective match-up and they will go on to face the other video on their side of the draw in tomrrow's semi-final.

The rest is up to you!

Match 3: I'll Have Sex Tonight And Everything vs Pat Kenny Rips Up Tickets

Download Our Special Election Podcast Here Or Listen Below:

The Rewind
5 months ago
By Balls Team
Opinion: Why Amy From Co. Cavan Is The Real Hero Of 'What's Snots'
35

The Rewind
5 months ago
By Balls Team
Opinion: Why Amy From Co. Cavan Is The Real Hero Of 'What's Snots'
The Rewind
1 year ago
By Mark Farrelly
The Result Of Our Vote For Ireland's Greatest YouTube Video
The Rewind
1 year ago
By Mark Farrelly
A Minute-By-Minute Breakdown Of "What's Snots?' And "Eamon Dunphy Calls Out Rod Liddle"
Popular on Balls
Premier League
15 hours ago
By Michael McCarthy
Quiz - Can You Name Manchester United's Top 3 Goalscorers From Each Premier League Season?
Football
15 hours ago
By Gary Connaughton
Paul Scholes Is Unconvinced By A Manchester United Move For Jadon Sancho
29