The Result Of Our Vote For Ireland's Greatest YouTube Video

What a journey this has been. We'd like to begin by thanking each of you for joining us here today and for your invaluable input over the past week. We genuinely cannot believe the reaction our vote for Ireland's Greatest YouTube Video has gotten.

Through each round we have all joined in the laughs, the debate and the torn loyalties that only a competition of such high standard could generate. After starting off with a list as long as our arm, we managed to whittle it down to 32 before you decided the rest. Even the first round brought with it some shocks as we waved goodbye to the likes of "Fuck You, Deputy Stagg" and "Shlow Down Tommy."

The second round was a blood bath, with "League of Ireland Fan" falling to "Eamon Dunphy Calls Out Rod Liddle," while other greats like Effin' Eddie Moroney and Paddy Losty also got their comeuppance. Teresa Mannion, the Irish lad who 'failed' the driving test, Pat Kenny and the man who slipped on the ice all met their end in the quarter-finals and then we were down to four.

"Eamon Dunphy Calls Out Rod Liddle" had won both its first and second round matches 51% to 49%. In the quarter-final it had managed a 52% to 48% victory but surely it couldn't pull off the impossible again? It trailed the Castletown Donkey Derby right up to the last hour of voting but somehow it did it! Another 52% to 48% win and it had booked its place in the final.

On the other side of the draw, "What's Snots?" was bouyed after beating the overall favourite, "Man Slips On Ice" in the quarter-final. It faced the unseeded "I'll Have Sex Tonight And Everything" in the semis and stormed through yet again, setting up a mouthwatering final.

This was the unstoppable juggernaut versus the man who refused to quit. "What's Snots?" was the bookies favourite but "Eamon Dunphy Calls Out Rod Liddle" had spent a week defying the odds.

The poll ran from Monday afternoon until 3pm on Tuesday. On Twitter, Dunphy took home 57% of the vote, on Instagram he garnered 58%. However, these platforms had never been "What's Snots?" strongholds. Its campaign had focussed on the Balls.ie website vote. Would it be big enough to drag it over the line?

Ladies and gentlemen, boys and girls, pigs and turkeys, we can exclusively reveal that, with 57% of the overall vote, the winner and newly crowned Undisputed Greatest Irish YouTube Video of All Time is.... 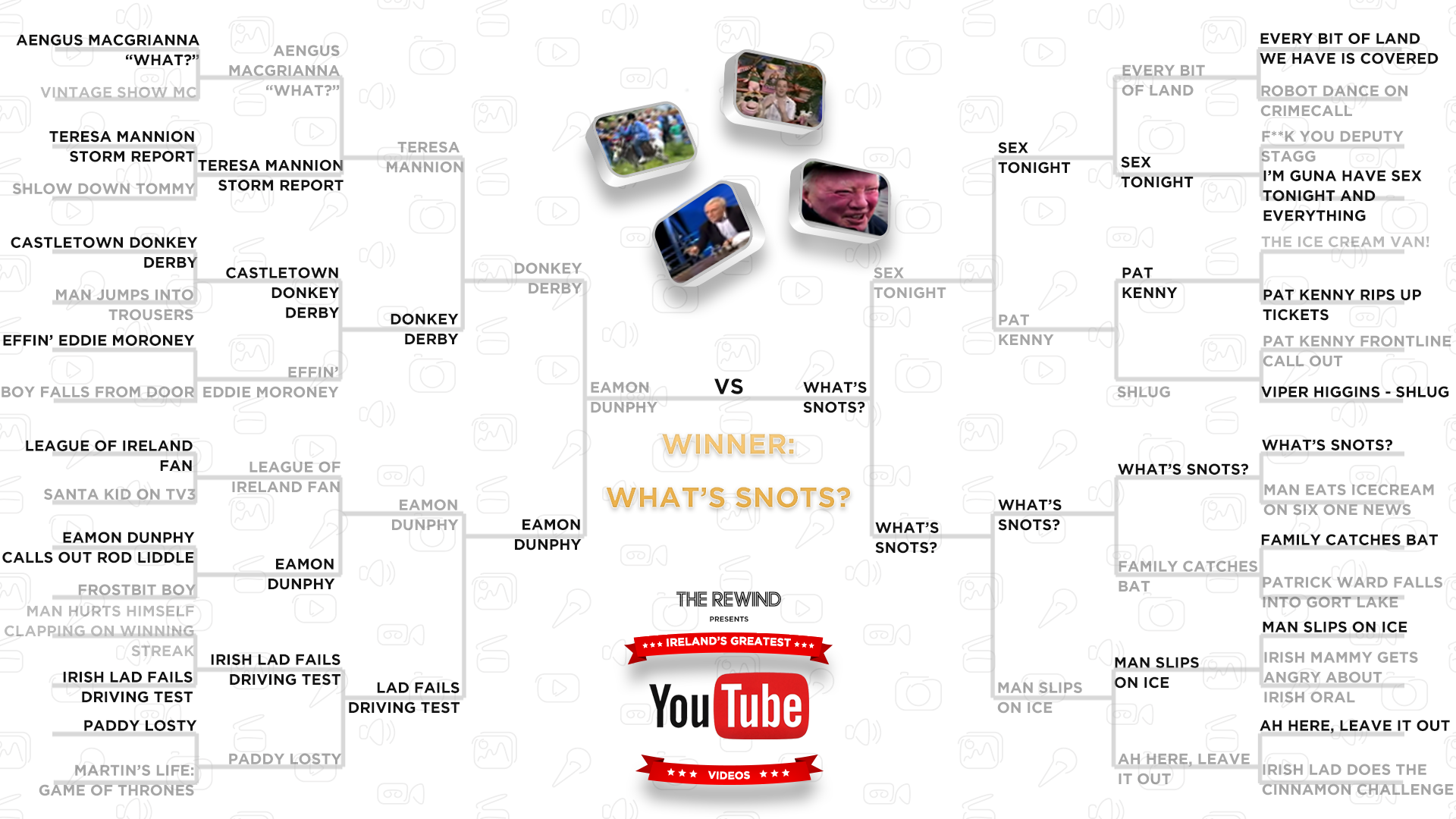 What a worthy winner. This was a contest of the highest calibre and 'What's Snots?' has really earned its place in history. The people of Galway will be dancing in the streets for Kevin, there'll be an open top bus parade down Cavan town for Amy and so there should be!

For on one faithful day, on the 1st of April 2004, they came together to create a moment that has lived on through the decades. A moment that has been given a second life on the interent and is now officially Ireland's Greatest YouTube Video. The didn't just win their bikes the easy way by saying a word as simple as 'house,' they earned them. And so here we are, 15 years later and still laughing.

Still laughing at Kevin not having a clue what's going on. Furiously giggling at Amy's ill-fated attempts at actually playing the game properly, and howling at Francie Boylan as he tries to not break down in knots at two children live on national television.

"What's Snots?" is a riot. It's a class apart and it is truly the greatest YouTube video in Ireland.

The Rewind
6 months ago
By Balls Team
Opinion: Why Amy From Co. Cavan Is The Real Hero Of 'What's Snots'
The Rewind
1 year ago
By Mark Farrelly
A Minute-By-Minute Breakdown Of "What's Snots?' And "Eamon Dunphy Calls Out Rod Liddle"
46

The Rewind
1 year ago
By Mark Farrelly
THE FINAL: Vote For Ireland's Greatest YouTube Video
Previous Next

The Rewind
6 months ago
By Balls Team
Opinion: Why Amy From Co. Cavan Is The Real Hero Of 'What's Snots'
The Rewind
1 year ago
By Mark Farrelly
A Minute-By-Minute Breakdown Of "What's Snots?' And "Eamon Dunphy Calls Out Rod Liddle"
The Rewind
1 year ago
By Mark Farrelly
THE FINAL: Vote For Ireland's Greatest YouTube Video
Popular on Balls
The Rewind
16 hours ago
By Fiachra Gallagher
"Guy Was An Interior Decorator!": 20 Years On From One Of The Best Sopranos Episodes
Rugby
12 hours ago
By Eoin Harrington
Kyle Sinckler Was Incredibly Honest About His Lions Omission
Football
18 hours ago
By Gary Connaughton
Derby County Have Mick McCarthy To Thank After Crazy Escape From Relegation
48