Ireland is braced for a spell of severe weather this week as Tropical Storm Lorenzo is set to hit tomorrow afternoon.

The news broke today that from Cork through counties Kerry, Clare, Limerick, Galway and Mayo are classed as an orange warning. A yellow warning exists for the rest of the counties.

The reaction to this news has been typical of this nation; facetiousness while varying from self-deprecating to outright cynicism.

Orange? Fucking Orange Met Éireann? Are you fucking serious? All you had to do was fucking over react to a weather anomaly like you used to so i could get a fucking day off work and you can't even do that right you absolute bunch of teaspoons

In terms of safety concerns, the National Emergency Coordination Group will continue to provide updates, crisis management teams are ready to go and a weather warning is in place from 9am Thursday.

In terms of solace, we have memes. No outlet is a better representation of the Irish ability to find humour in literally anything than the Ireland Simpsons Fans page.

All of Ireland waiting to see if we get the day off tomorrow pic.twitter.com/8JfQqBFhgi

All our can memes, gone to waste! For shame @MetEireann you've harmed this nations culture pic.twitter.com/h2FH0ayjQ0

Half the country right now pic.twitter.com/tQZLtHSwKl 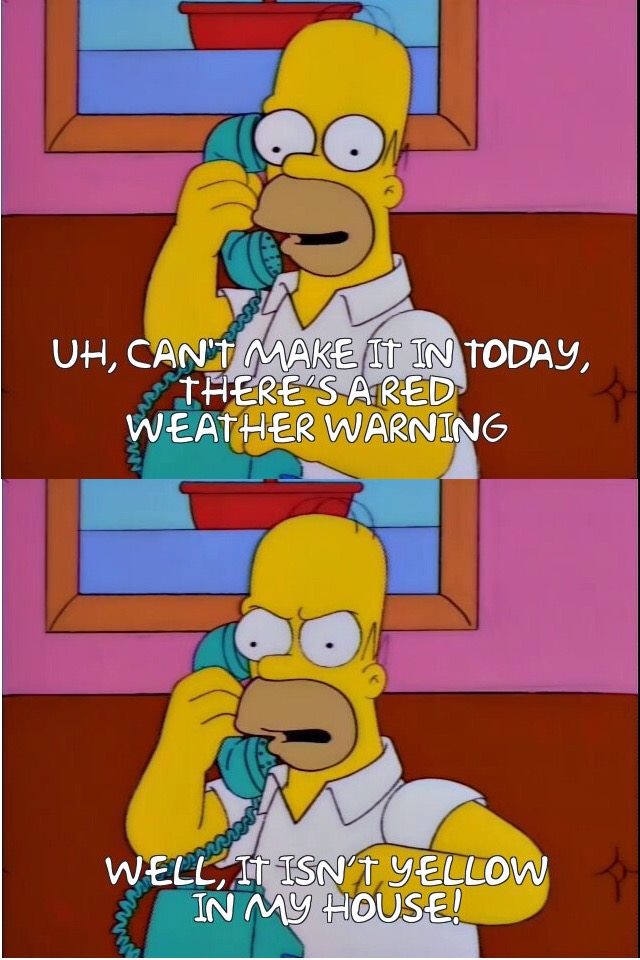 SEE ALSO: The Rewind Recommends - American Horror Story: 1984 Is Murphy & Falchuk Back To Their Best

The Rewind
2 months ago
By Mark Farrelly
The Father Ted Feckposting Facebook Group Is The Comic Relief We All Need
Popular on Balls
GAA
11 hours ago
By Gary Connaughton
Confirmed: We Now Have An Official Date For The GAA's Return
11