After what has been a very tough year for everybody, we were all looking forward to some sort of normality in tonight's Late Late Toy Show.

The annual event is a long established Irish institution, one that is a big event in households throughout the country.

While there were of course some challenges in this year's show, RTÉ managed to bring us one that was as close as possible to the show we all know and love. The toys, the musical numbers, and the inevitable mishaps were all on show.

However, the highlight of the night was Saoirse.

She captured the hearts of the nation with her story on the show tonight, telling her heartbreaking story. She lost her leg earlier this year after a tumour was found, but has shown incredible bravery to mount her recovery.

Not only did she raise enough money to help her family pay for her recovery and the prosthetic legs that Saoirse will need as she continues to grow up, but they also gave all the excess cash raised to the organisations who had helped her through the difficult period in her life.

When she was sick, Saoirse had three wishes. The first was to recover from her operation and walk again, which she did in front of the nation tonight. The second was to appear on the Late Late Toy Show, which was also ticked off the list.

Her third wish was to travel to Disney World in Orlando with her family, with Ryan Turbridy surprising her with tickets to Florida. Saoirse's mother soon came onto the stage and it was hard not to feel incredibly emotional.

Unsurprisingly, the entire nation had fallen in love.

Lovely to see one of our virtual fundraisers, Saoirse Ruane, appearing on the #LateLateToyShow tonight 💛

Saoirse is an 8 year old cancer survivor and all round legend. Congrats Saoirse and enjoy Disney World 🌈 pic.twitter.com/d7yl1JHGoM

Hi @RTELateLateShow & @AerLingus if you let us know when Saoirse and her family are traveling we would be delighted to offer them complimentary use of our Platinum Services VIP facility. #LateLateToyShow pic.twitter.com/mSe1d5BGMX

Gorgeous beautiful girl, so brave - this year has been a lot tougher for her and her family - hope she gets to Disneyland soon ❤️ #LateLateToyShow pic.twitter.com/YAPJ92b6D3

What an amazing girl saoirse is. Her story and bravery really puts everything into perspective. ❤❤#LateLateToyShow pic.twitter.com/BbssQBHOeT

Saoirse putting EVERYTHING in perspective.#LateLateToyShow

Have you ever seen a more beautiful little girl than Saoirse? An inspiration to all of us. #LateLateToyShow ❤️ pic.twitter.com/6HTcZ7hJdE

A little bit of perspective when it was needed most.

SEE ALSO: The Most Memorable Sporting Cameos From 'The Late Late Toy Show' 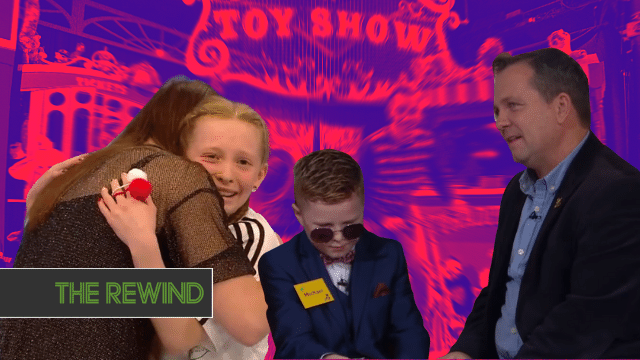