Watch: Storm Barra Has Been Wreaking Havoc Around The Country

While experiences seem to vary depending on what part of the country you find yourself in, it is clear that Storm Barra is causing quite a bit of commotion around Ireland today.

Schools may be closed in various locations and many people are working from home, but there has still been some remarkable footage shared of the weather conditions around the island.

One of the more unusual incidents caused by Storm Barra took place in Bray, with a giant silver ball previously attached to a jewellery shop going rogue down the middle of the town.

This giant silver ball was attached to a jewellery shop (Bannons) on bray Main Street. It’s now heading towards little bray via castle street. Stay safe, be vigilant. (I don’t know who shot the footage) pic.twitter.com/RzbycXN8vb

Of course, a number of trees have also been blocking off roads and pathways around the country, including in Limerick.

JFK school yard Ennis Rd Limerick will be out of action for a while with trees down #limerick #stormbarra ⁦@rtenews⁩ pic.twitter.com/gxz7LoyceZ

Flooding has also been reported in a number of areas, especially in Cork.

Édaín O Donnell sent us this video from Ring Clonakilty, taken at 07.45 this morning. #StormBarra pic.twitter.com/DHlYQMLEnF

Someone in that part of the country even lost their wheelie bin.

If anyone is missing a wheely bin, it's floating around in Cork Harbour at the moment. 🗑Vid: Yvonne W. #StormBarra pic.twitter.com/JD0VmE7sIw

As was being predicted, the coastal areas have been hardest hit by the conditions.

There have been some remarkable scenes, with strong waves battering Tramore and Dún Laoghaire.

It appears that Storm Barra also had it in for the trampolines of the nation.

Oh no, oh no, oh no no no! The trampoline that nearly broke free (and almost took it's owners on a magic carpet ride!) Video from one of our followers in Bantry this morning 🙈 pic.twitter.com/fUoNYDsJyu

Donegal saw some snow earlier in the day, making for some very difficult driving conditions.

With that being said, Storm Barra didn't stop the speed vans from hitting the roads.

Spare a thought for the poor man in a speed van up in the mountains of Donegal this morning #StormBarra pic.twitter.com/oOrnVIanZS

One of the more remarkable pieces of footage was captured 13 kilometres off the coast of Cork.

There were some biblical scenes as the waves rushed towards the shore at Fastnet Lighthouse.

It is unlikely that we are over this weather event just yet, with Met Éireann issuing status red wind warnings for a number of counties in the south of the country until later tonight.

Even then, an orange weather warning will stay in place in a number of locations until tomorrow morning.

It sounds as though Storm Barra could recreate more scenes such as these ones before the day is out. 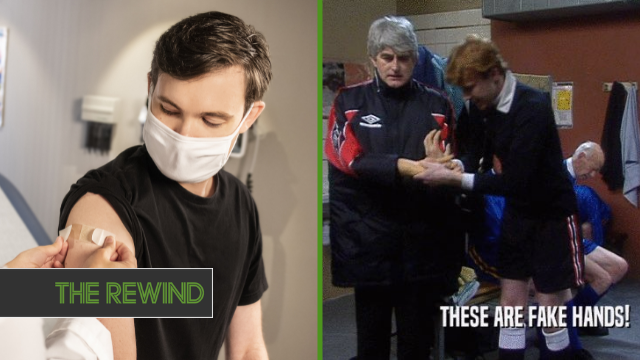