It’s Kendall’s birthday, and he’ll cry, and very possibly die if he wants to. “The Notorious KEN Ready to Die” is the legend that greets his party guests.

With the booze, narcotics and bitchiness bubbling over, Too Much Birthday cracks open the deep divisions in the Roy family, and not just that between Kendall’s rebel alliance and the rest of the clan. The final two episodes promise to be explosive, even if a fourth season has already been booked into the schedules.

The “big fucking nervous breakdown” of a party Kendall promised Josh Aaaronson - who doesn’t show - is duly delivered, particularly for him. But others lose it, too. The morning after is likely to be grim for each of the siblings, even Roman, whose moment of personal triumph at the close of the episode is dampened by his being so utterly unpleasant.

And the party itself is naff, overblown, and the opposite of fun, a reminder that all the money washing round the Roys and their acolytes can never buy taste, decency and happiness. The ultra-hipster music choice of Spacemen 3’s Big City plays at one point. “Let the good times roll”? Not this lot, not ever.

“The Waystar Two are free.”

He begins the episode surfing more prison pictures but receives the happy news from Gerri he will not now be heading to the slammer. Logan nods that Tom’s willingness to take a dive isn’t forgotten: “I’ll remember.” The celebration is wild, smashing up Greg’s office. “Just scooch up a little bit, buddy,” he says, beginning his rampage. Tom ought to be the happiest he has been since, well, before he married Shiv, but her diffidence to him weighs heavy. “I feel amazing, my senses are heightened, the air smells sweeter, I can see the poetry in mundane things,” he says arriving at KenFest, and yet ends up having as terrible a time as Kendall. Tom is peering through the bullshit, again the star of the show, its immoral conscience.

“This is my treehouse, you shouldn’t be anywhere near it.”

The wave that Kendall had been surfing was always likely to crash down. His dreams of slaying his father are doomed. He can never be the killer that Logan became to succeed. Sensitivity will always let him down. He is hurt that Shiv and Roman are only attending the party for business reasons, and demolished by the disappearance of his children’s handmade gift to him. Toking on spliffs, grooving to hip sounds, “there’s no boundaries if you are cool,” he says before the party starts. But as soon as it does, he is faced with his reality, his family and losing his nerve. The Billy Joel number he planned to perform is canned. He ends the episode in tears on the shoulder of Naomi Pierce. Kendall can never be cool; not even $2 billion can buy him cool. As he laments, “it just feels like an asshole’s birthday party”.

Brilliant scene. These are the exact words Logan said to Kendal in the pilot after randomly deciding he would not be making Kendal CEO at the last minute. Roman Roy IS his father. No one else will make a better successor to this twisted empire. #SuccessionHBO #Succession pic.twitter.com/n3oJbLuNj5

“It’s like a haunted scarecrow asking out Jackie Onassis,” mocks Tom, but he is proved wrong when Greg lands a date with Comfry. Perhaps his dropping into a southern hick accent won her over - “thank you kindly, ma’am” - though it appears she is mostly happy to date him out of spite towards Kendall. Oh well, Roy romances have been founded on far less. And like Tom and his realisation of his existence’s utter fecklessness, an altercation with Kendall blows away some cobwebs. “You’re like the world’s biggest parasite” lands a blow. It’s not necessarily wrong, but it’s cruel and Greg could still be a danger.

Flushed by his ongoing affair with Kerry and news the Department of Justice will be going easy, Logan is in chipper form. “He’s having a midlife crisis aged 80,” says Shiv though Roman suggests such behaviour is “just normal”. How best to celebrate than telling GoJo’s representative “sherpas” to “fuck off”, sending his more loyal kids to conduct business deals at his estranged son’s party and then offering Kendall $2 billion to, yes, “fuck off” by buying out his shares. And while his kids go at each other’s throats, he remains in control. As always.

“I am inserting myself into my mom’s vagina.”

Another episode to reveal Roman is the truest heir to his father’s brand of uncaring, brutish ambition. Since the first season when he courted Sandy and Stewy at Tom’s stag do, he has always been the best dealmaker, and proves it again when winning over on-the-spectrum techie Lukas Matsson, “the Odin of codin',” with a display of finest incel japery. Though how will Logan like being sidelined by the GoJo deal? His lack of conscience over sending spies to watch Kendall with his kids deepens his growing rift with Shiv. And at the end, he is the only one laughing as Kendall’s pain reveals itself. “You can’t bear to see me win,” he crows.

“What if McCartney tweets this?"

The ever reliable supplier of the curveball will not remove the coat from his busted arm - “as is my right” - with comic consequences. The only Roy sibling to turn up to Kendall’s birthday as an act of familial love ends up on the wrong end of his brother’s psychoses, having earlier complained about the mocked-up newspaper headline that lampooned his run on the presidency. He’s now polling close to “one percent” and thinks he will soon be courting Angel Merkel and George Soros. Never change, Connor, please.

“I couldn’t find one that said happy birthday and get well soon at the same time.”

The souring and hardening of Shiv’s character has been one of the more obvious arcs of the season. She is all business, and that includes barely flinching when it is revealed her husband is not going to jail. Her focus is elsewhere, on buying a streaming company and Roman is moving ahead of her in the pecking order. Finding she was not part of the deal to buy out Kendall is the latest blow to her ambitions. And has her conscience revived itself? “That is disgusting,” she says when the spying on Kendall’s kids is revealed. Her dancing suggests she has little idea of what having a good time looks like.

This is the exact energy Shiv was giving off#SuccessionHBO pic.twitter.com/N7ACyKdPR0 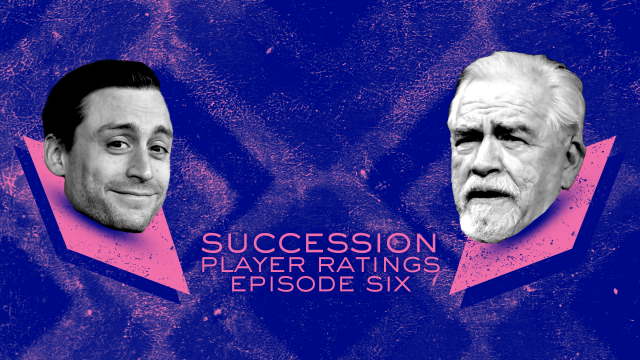 The Rewind
2 days ago
By Balls Team
Can You Complete The Lyrics To These Classic Westlife Songs?
Previous Next

The Rewind
1 day ago
By Jonathan Byrne
The Story Of Meat Loaf's Tour In Ireland During The Troubles Is Remarkable
The Rewind
1 day ago
By Jonathan Byrne
10 Songs From Video Games To Make You Feel Nostalgic
The Rewind
2 days ago
By Balls Team
Can You Complete The Lyrics To These Classic Westlife Songs?
Popular on Balls
Rugby
16 hours ago
By Colman Stanley
Jimmy O'Brien Announced His Arrival On The Biggest Stage This Afternoon
Basketball
13 hours ago
By Eoin Harrington
Kieran Donaghy And Tralee Warriors Claim National Basketball Cup Title In Tallaght
The Rewind
21 hours ago
By Gary Connaughton
Quiz: From Which Irish County Did This Company/Product Originate?
Football
23 hours ago
By Gary Connaughton
Carragher Reveals Unhappy Instagram Message From Lionel Messi After MNF Comments