The Best Memes From This Year's Late Late Toy Show

Ireland rarely experiences a night of togetherness quite like the night of the Late Late Toy Show - and with that inevitably comes a slew of top quality memes every year.

2021 was no different, with the Irish Twitter sphere coming to life on Friday night and reacting to the good, the bad, and the downright weird of another memorable Toy Show.

The show got off to a barnstorming start, with the Lion King theme coming through strong in the opening number. The costumes in the opening sequence were certainly eye-catching - and the outfits throughout the show were a key source for meme material.

This is what undercover guards at electric picnic look like #LateLateToyShow pic.twitter.com/zCLGAOXfQr

The nation immediately took to young DJ Calum and his personal hype man, younger brother Jackson, after their performance on the Toy Show on Friday night. Calum was gifted with a new laptop and mixing desk to fuel his dream of becoming a full-time DJ.

Calum's performance was seriously impressive but, naturally, it also led to plenty of brilliant content on social media.

”So your Mother was telling me you're studying to be a Hype Man now” #LateLateToyShow pic.twitter.com/RL2cszhJ3o

When you’ve lost all your mates and found a new group to dance with and you’ve no fecks given #LateLateToyShow pic.twitter.com/bZ7DtSbnPe

We always expect the Toy Show to find brilliant ways of showcasing the talent of Ireland's young people, and it did so in fantastic fashion once again on Friday night. From DJing, to singing with Ed Sheeran, there was plenty of talent on show - though one thing we weren't expecting was a performance of Ave Maria in Latin.

In fairness to the young fella, he knocked it out of the park, but the reaction of DJ Calum in the background had the Irish population in stitches.

Hang the Toy Show in the Louvre immediately pic.twitter.com/Fo8uIHs6gE

Revolut when they realised the sheer amount of Irish people across the globe who’d end up crashing their app trying to donate to a random show for children in Ireland #LateLateToyShow pic.twitter.com/37XaFIP2yX

When you're asked to sing Ave Maria on the Toy Show.pic.twitter.com/CC2jpXuw67

All in all, though, the Late Late Toy Show was yet again a beautiful Irish cultural occasion. It does truly feel like one-of-a-kind, and year-on-year it's a real highlight of the Christmas buildup in Ireland.

That being said, even host Ryan Tubridy acknowledged at one stage how hard it would be to explain the concept of and widespread love for the Toy Show to a non-Irish person. One Twitter user linked the Toy Show to the latest Irish celebrity couple to convey that point.

Paul Mescal out there trying to explain the #LateLateToyShow to Phobe Bridgers pic.twitter.com/rvNeh2cikM 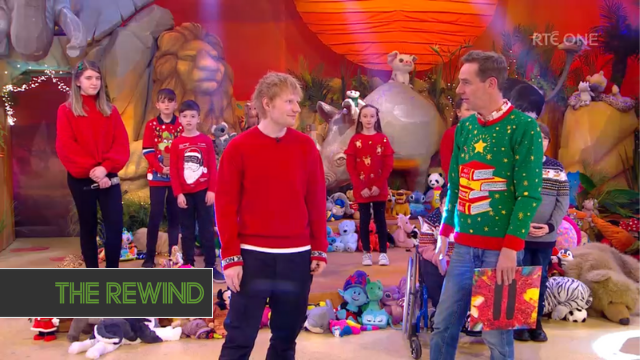