The isolation of lockdown and the time it provides for contemplation of our lives led to The Hardy Bucks' Owen Colgan last month outlining an ambition.

"Once this is all over," he wrote on Facebook, "I want to be the first man to climb Mount Everest in a pair of boot cut jeans and a buttoned down shirt".

There came a reply from Stephen Murphy. He knew of a man who nearly a decade ago had completed a similar feat.

This is the story of Cork farmer Dan Hennessy's 2011 climb of Japan's 3,776m Mount Fuji. It is told by Dan and his friend Martin Sheehan.

'We decided to do Mount Fuji last, which was a bad idea'

Martin Sheehan: We went over there in 2011. I was supposed to be competing in a karate tournament. Dan said he'd join me for the trip.

We didn't end up at the tournament because I got injured two weeks prior to it. It just became a 16-day lads' holiday with Dan.

I don't know if Dan had ever even been out of the country before we went to Japan.

Dan Hennessy: Yeah, I suppose it was [my first time outside of Ireland].

MS: We decided we'd go on a seven-day trip finishing off with Mount Fuji.

We lost our train tickets and the whole thing got cancelled initially. Dan spent two days sifting through a load of hostel bins but it turned out they were in one of my pockets all along.

We decided to do Mount Fuji last, which was a bad idea; we had six nights beforehand in different places going out and partying.

DH: I'd say we were after about a week of just going out non-stop. When you go out there, you're going out for 18 hours and that kind of craic.

We were at the end of our train ticket. I just said that I wouldn't mind climbing Mount Fuji. We went there.

We went up hungover to the base point, one of the hostels where you stay. I think we got there around eight or nine o'clock at night. Most people leave to climb Mount Fuji at midnight because it's a lot cooler and you get up there to watch the rising sun.

Dan thought he might go at 1am or 2am because he figured he could climb it faster than anyone anyway without any training.

'We call him The Horse'

DH: I was talking to a few people in the hostel where we were staying and they were saying it was tough enough.

There was one fella who told me it was the toughest thing he ever did in his life. But, ya know, he was Canadian. He was a bit like a tomato - he got badly burnt. He said he wouldn't have made it to the top if it wasn't for his girlfriend.

There was another fella that told me he got altitude sickness up there. 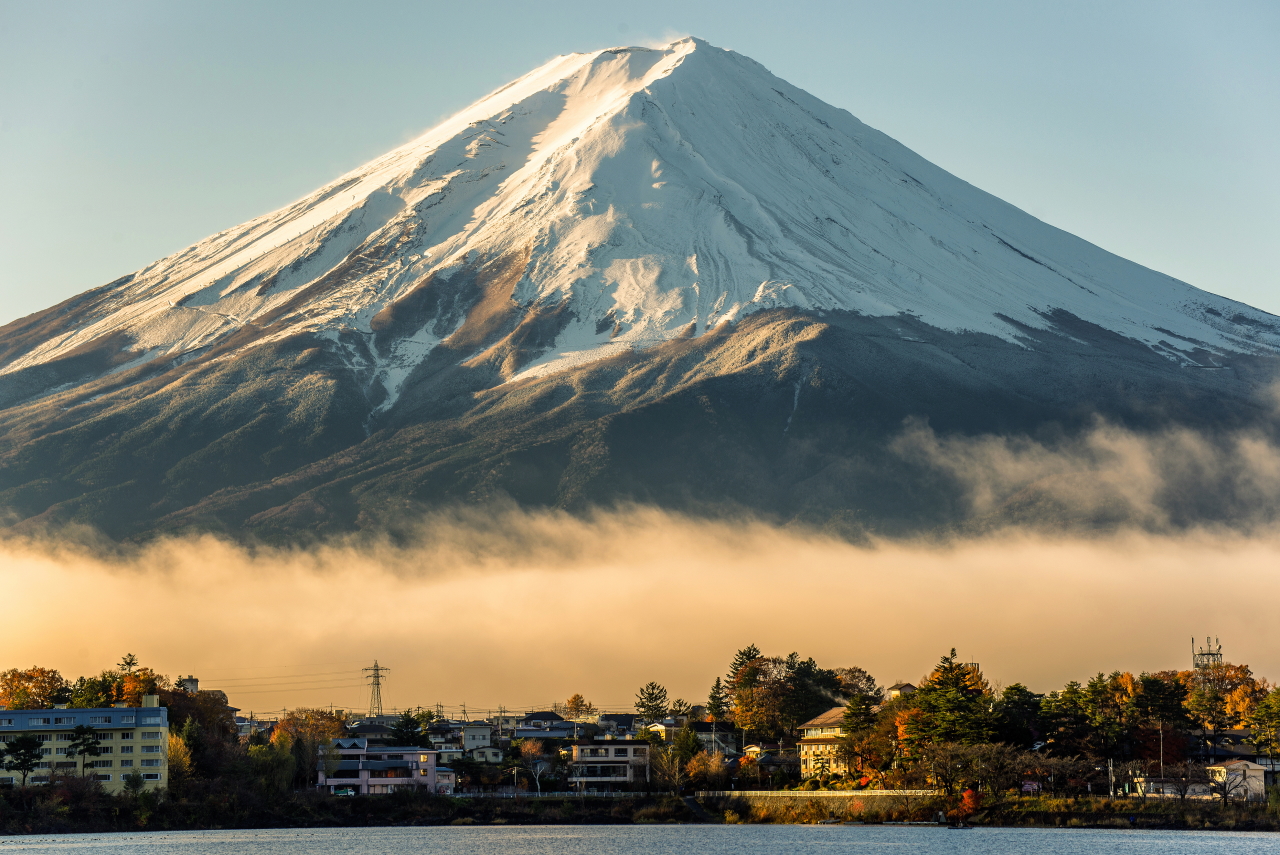 MS: We had few pints that night in the hostel. I convinced him he'd be alright with a few. He went up to bed around 12am to get an hour's sleep before climbing. He slept in until 6am.

He woke up in a panic. He just threw all his supplies into the bag. He had a bunch of bananas, a couple of energy gel packs, five or six 1.5 litre bottles of water - he about a stone weight on his back.

He was looking around and realised he'd need something to cover his head. He found a hand towel from one of those Japanese bathhouses. You have to be in the nip. They give you these tiny towels to dry yourself with.

He had the Kildorrery GAA jersey on him and a checkered lumberjack style shirt; three-quarter length Penney's shorts that were in awful condition - I don't know how he even brought them on the trip; Dubarry shoes - Dubarry's, of all the shoes to be wearing climbing a mountain.

I just looked at him before he left and said, 'What the fuck are you playing at?'

DH: All I had was a pair of AV8 shoes. It was either that or a pair of sandals. I brought about six litres of water, the bananas, snickers. I had enough for about a week up there.

I missed the first bus and had to get another one. I was behind on time.

MS: We had to get the last bus back to Tokyo at 10pm. If we missed that bus, we had to pay 200 quid because our week-long ticket would have been gone.

We advised that it should take five hours up and three hours down. Dan said he'd be up and down in no time, 'Sure, I'll probably be back in five hours'.

I was never going to climb it with my own injury. I was just going to walk around the base.

I got a stick, a timber stick, I bought one of them alright.

It was warm, about 32 degrees that day. I put the towel over my head about halfway up because I thought I was going to get badly burnt, which was probably a good idea because I did get burnt on my legs.

I arrived at the top and spent about 15 minutes there because I was in a rush to get back down again.

I wasn't really sure how to get down. I just followed people. I went down the complete opposite side of the mountain. There was no one who could speak English so there was no point in asking at the top.

MS: I went for a cycle around the lakes at the bottom to kill a bit of time.

4pm was roughly the time he should have arrived back even if it took him the average person's time.

I was sitting in the hostel bar. I met an English couple and asked if they climbed it. They said it took them eight hours. I was chatting to a few others and they all said eight hours. I said Dan should be back any minute so and we'll have a drink here.

There was no sign of him at 4pm or 5pm. Come 6pm, I said that's 10 hours, way longer than what it should take.

I went out to the hostel owner and said that my friend got on a bus to the base 10 hours ago and that he should be back. They said that maybe he's tired and not so fit. I said that he's incredibly fit and that it shouldn't take 10 hours. I asked if they thought something could have happened to him. They said to give it another hour and they might call the mountain rangers.

I came out at 7pm and they said they'd ring the mountain. There was no sign or sight of him up there.

At 9pm, they rang the mountain and thought they might have to send out a helicopter. It was 13 hours for a fit young man - clearly something had gone wrong. 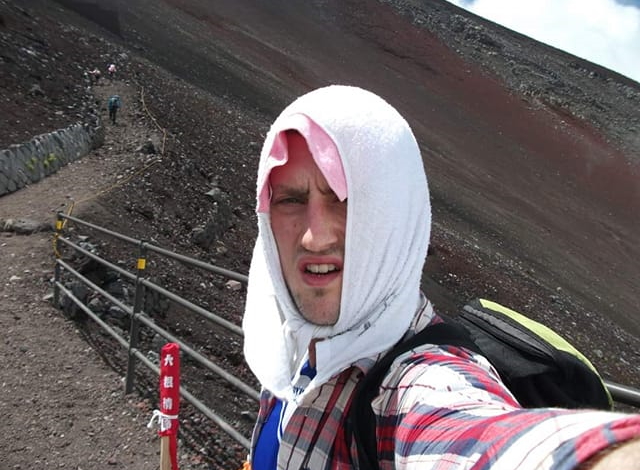 DH: I was about 30 minutes from the bottom and there was a point where there was nobody around me. I remember thinking that I should be down already. I didn't really have a clue because I hadn't done any research. I just took off.

This woman he was working with arrived and I gave her the hostel card. She could speak English and eventually figured out I was an hour and 20 minutes by car from where I was supposed to be.

Your man, he had a car that he was using for work. As I was getting into the car, he told me to duck down because there were people around and they could see him. He wasn't supposed to be doing this. I was crouching down behind other cars as I was getting into it. He just drove. I didn't know where he was going. I figured out that they were bringing me to a bus.

We were in the car for 20 minutes. There was a bus in front of us and it was just coming to a stop. He pointed at it and told me to get on it.

At half nine, he rocks into the bar, looking like a man who had just been through a fuckin' war. He still had practically all the water in his backpack - he'd only drank one bottle! He put the bananas down the bottom, so they got crushed. He couldn't eat the bananas.

I just goes, 'What the fuck happened to you? We were about to call a helicopter to get you down'.

He goes, 'Fuck it lads, I came down the wrong side of the mountain'.

DH: We had no phones over there so I had no way of contacting anyone.

I just remember walking into the hostel, taking off my shoes - you had to take off your shoes wherever you went into - and pouring out a load of pebbles.

MS: The thing that got me the most was bringing back most of the water. He didn't just pour out some of it.

DH: Japan is a fairly warm country - you drink a lot of water. I probably drank a litre going up the mountain and a litre sitting on the bus. I'd bought it so I said I'd probably use it again.

MS: He was a broken man. He thought he'd have a bit of a break when he got down but I was like, 'Dan, we've got to run to the bus. We're not going to make it'.

He was carrying my bag. It was a shoulder injury that I had and I couldn't carry the backpack. I was wheeling the light suitcase and he was carrying his backpack and my backpack running 1km, racing to get to the bus. 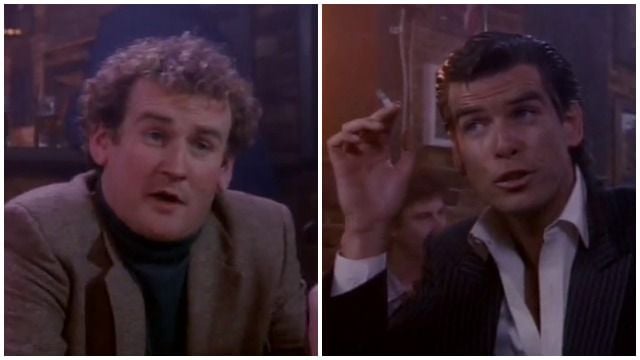 Football
3 months ago
By Donny Mahoney
Liam Gallagher Reveals Diego Maradona Once Threatened To Kill Oasis
Football
3 months ago
By Sean Meehan
QUIZ - The Great 32 County Quiz Of 2020!
Popular on Balls
Premier League
17 hours ago
By Michael McCarthy
Quiz - Can You Name Manchester United's Top 3 Goalscorers From Each Premier League Season?
Football
17 hours ago
By Gary Connaughton
Paul Scholes Is Unconvinced By A Manchester United Move For Jadon Sancho
29