HUGE NEWS: The Den Is Coming Back To Our Screens!

Dublin is back in all-but lockdown, and eight other counties don't look too far behind. The Covid crisis is almost eight months old. We badly, badly needed some good news. And finally, we have it. The Den is back!

No, it's not just old episodes on repeat. No it's not just a charity special like we saw earlier this year. Yes, The Den is really back. Ray D'Arcy, Zig, Zag, and Dustin will be back on our screens on 8th November. The show will air on Sundays at 6.30pm.

THE DEN IS COMING BACK!
Ray has just announced that 33 years after Zig and Zag came into our lives, The Den is coming back to our screens!
🥳🥳🥳@DoubleZCreative @RTERadio1 @rte @RTEOne pic.twitter.com/LwfRScms02

D'Arcy made the announcement on his radio show today.

The Den will return in November! We’re on in the lead-up to Christmas. We’re there for the boys and girls and parents and inviting them to do all the thing they used to, and more! It’s all very exciting and I can’t wait to be on telly with the boys again. People out there need a bit of mayhem, madness and boldness and that’s what we hope to deliver.

The show of of all our childhoods had already been in the news this week with RTE confirming that old episodes of the show had converted to digital and would be available on the RTE Player.

During the summer, D'Arcy hosted a special version of the show as part of RTE's Comic Relief night, with Dustin, Zig and Zag all showing there was still fire in the belly. Dustin in particular almost caused an international incident when Niall Horan fans got very offended at his treatment of the former One Direction superstar.

The news we all needed to hear - THE DEN IS BAAAAACK! 🥳️🙌🎉
Starts Sunday 8th November, 6.30pm. #TheDen pic.twitter.com/HLlw3yXYmA

The news comes on the 33rd anniversary of Zig and Zag's debut on TV. Dempsey's Den, with Ian Dempsey as the original host, was first visited by the aliens from Zog on 22nd September 1987, and Irish TV changed forever.

ON THIS DAY! 33 years ago - 22nd September 1987 #ZigAndZag made their TV debut on @RTEOne landing in Ireland and joining @IanDempsey on ‘Dempsey’s Den’ so we’re claiming this day as International #ZigAndZagDay pic.twitter.com/BH1lsVwaJn

Needless to say, things improved over the years. Dustin joined the cast in 1989, while D'Arcy took over the presenter's chair in 1990. That launched the heyday of the show, entertaining children of all ages every weekday afternoon, until Zig and Zag were poached by Channel 4 in 1993. Things continued on without the lads until 2010, and while it was never quite the same, the show still had its moments, such as the greatest Irish Youtube moment of all time, as voted by the Balls.ie readers.

Details are yet to emerge as to what the latest iteration of the show will be, but the A-List cast have been gathered, and the Sunday evening time slot would suggest the target audience is the nostalgic 30-somethings who remember the 90s glory days so well.

You can listen to the full segment from today's Ray D'Arcy Show with all the gang below:

No word yet on the involvement of Zuppy, Snotser or Socky.

SEE ALSO: Dustin The Turkey Responds To The Hate Over Niall Horan Joke 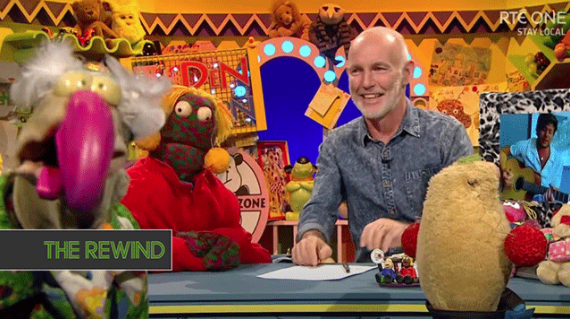 The Rewind
6 months ago
By Balls Team
Opinion: Why Amy From Co. Cavan Is The Real Hero Of 'What's Snots'

The Rewind
6 months ago
By Balls Team
Opinion: Why Amy From Co. Cavan Is The Real Hero Of 'What's Snots'
Popular on Balls
The Rewind
17 hours ago
By Fiachra Gallagher
"Guy Was An Interior Decorator!": 20 Years On From One Of The Best Sopranos Episodes
Rugby
13 hours ago
By Eoin Harrington
Kyle Sinckler Was Incredibly Honest About His Lions Omission
Football
18 hours ago
By Gary Connaughton
Derby County Have Mick McCarthy To Thank After Crazy Escape From Relegation
49