The Line Of Duty Theory That Chloe Is Gates's Daughter: Too Good To Be True?

Last night's episode of Line Of Duty was explosive as its gets. If the episode had ended with Compston and Lakewell counting their blessings after the failed mob raid on their interview convoy as the drone footage zooms out on the crime scene, you couldn't complain. Instead, Lakewell got done as Buckells looked on, Davidson was reminded what happens to rats by PC Pilkington and a mysterious DNA match was between Davidson and an unrevealed character.

At the end of the day, Line of the Duty is a programme about bent coppers, and last night's episode seemed to suggest incontrovertible evidence of a bent copper within the ranks of AC-12. Bent copper, thy name must be Chloe Bishop.

It all came into focus when Chloe fired a side eye glance down a side street a moment before the OCG SUV arrived on the scene to cause mayhem.

Shortly after, the white van contained Arnott and Lakewell is flipped. Interestingly, Chloe tries and fails to mount the overturned van. Jonesy does climb atop the van to release Arnott and Lakewell only to be shot dead by a sniper. Chloe's body language certainly seems off in the rest of episode and Lakewell seems to give a nod to Arnott in the interview room that he suspects something is amiss with Chloe - unfortunately he's killed minutes later. Interestingly, Chloe suggests to Arnott and Hastings that someone within AC-12 could be leaking info. Is this Chloe trying to misdirect her own colleagues or a tacit admission of guilt?

SEE ALSO: What We Can Deduce From Line Of Duty's Mother Of God Cliffhanger

It's the nature of the programme to suspect literally everyone of corruption, but there has been a faction of LOD fandom who have been skeptical about Chloe's role in this series. She arrived to take Kate's place in AC-12 and has the sort of diligent, reliable, non-bombastic approach to policework that makes her an archetypal bent copper.

The look that Chloe is giving Steve and Kate here 👀

One tip off for Chloe-skeptics her first name. In season one, Chloe is the name of one of Gates's daughters (Natalie is the other). Gates is, of course, dead by the end of the first season of the show.  She was a 12-year-old in that series. Is it possible that Chloe was recruited by criminal elements, became a cop and was promoted to AC-12 a mere 9 years later? It feels like a reach but that hasn't stopped people from connecting the dots! There is a physical resemblance.

However, last night's episode seemed to draw Chloe and Gates closer together. Firstly there's the odious whiff of 'bent copper' about Chloe in the last 15 minutes of the episde.  People also thought Chloe's outfit in the interrogation of Buckells was deliberately reminiscent of her schoolgirl photo.

Chloe Bishop sporting the same colour combo as.... Chloe Gates' school uniform from series one. Nothing is a coincidence with the styling in this programme
See also: Kate and Jo's twinning wardrobes. #LineOfDuty pic.twitter.com/d2GxnNxXpv

Chloe Bishop is the leak.

✔️Too many worried looks
✔️ Spotted the suspect vehicle too easily
✔️Wringing her hands and looking nervous
✔️Conveniently gave Jonesy a leg-up so she got shot
✔️ Sniper didn’t shoot at her
✔️ Suggested the leak may be in AC-12#LineOfDuty pic.twitter.com/b0fl9ptGrB

So the question is less about whether Chloe is or is not bent --- let's presume she is. The question is whether she is related to Gates. Amateur LOD sleuths are beginning to draw together a grand theory about the show, and exactly what murdered journalist Gail Vella was digging into. Many of the show's bent coppers spent time in foster homes and care homes. Twitter user Eleanor Crossland teased this theory out last week. Which begs the question - what happened to Chloe Gates after her father died and where did she end up?

After this week's episode, it's harder to believe that Chloe is on the right of the law. The question is: is she random character thrown into the mix or is does her involvement in the programme go all the way back to the beginning?

SEE ALSO: What We Can Deduce From Line Of Duty's Mother Of God Cliffhanger 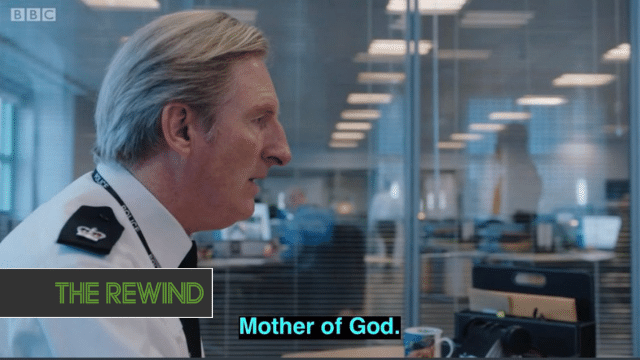