Today marks the centenary of Bloody Sunday. The killings of British intelligence officers in Dublin that morning by the IRA, followed by their reprisal by British Crown forces at Croke Park, was one of the bloodiest, and most important days of Ireland's War of Independence.  Much work has been done in the past decade by journalists, historians and the GAA themselves to help people better understand what happened in Croke Park that afternoon. For the day that's in it, we thought it would be worthwhile comparing the historical version of events with Hollywood's conjuring of the atrocity.

Neil Jordan's 1996 film Michael Collins features one of cinema's only gaelic football matches. That scene also serves as an unofficial version of Bloody Sunday. Michael Collins was enormously popular both in Ireland and abroad, and remains so, but it was skewered for its 'historical inaccuracies' when it was released in 1996. The Bloody Sunday depiction is just one of many scenes where Jordan knowingly took creative license with the historical record.

On his website of essential Irish ephemera ElectionLiterature.ie, Alan Kinsella posted a photograph of the call for 'up to 5,000 male extras' that appeared in the 1995 All-Ireland final programme. A special DART was even put on for the filming.

Jordan's hope was to dramatise Bloody Sunday in thirty seconds. It ended up taking him about three minutes. You can watch it below.

In the scene, a gaelic football match between Dublin and Tipperary is taking place at Croke Park. The stadium is thronged. One supporter has brought a dog to the game. The match is halted when armoured car with a machine gun barges onto the Croke Park pitch and parks amid the players. Faced with the obstacle, a Tipperary player holding the ball, presumably Michael Hogan, solos over the armoured car before scoring a brilliant point. After a roar from the crowd, Hogan is shot dead by the armoured car. After a dramatic pause, the armoured car opens fire on the spectators. More British troops arrive on the pitch, firing with abandon, as fans flee the stands.

The scene vividly (if tragicomically) captures the terror that spectators and players would have experienced. The events of that afternoon happened quite differently, and Jordan was aware of it. When Jordan appeared on the BBC's South Bank Show in 1996 to discuss his portrayal of Michael Collins, presenter Melvyn Bragg asked him specifically why he chose to alter reality when portraying this match. The conversation starts around 16 minutes here:

Bragg: A lot of people will say, in Croke Park, where the football game was played, the British did not come in with tanks.  There were soldiers who climbed ladders and dropped into the park. So, why introduce tanks?

Jordan: Well, it wasn't a tank. It was an armoured vehicle.

Jordan: Well, it's basically a machine gun with a kind of protective saucepan around the top. But they did drive their own vehicles. They would've had protective vehicles like that there. What they did was kind of worse in a way. They scaled the walls and locked all the exits and kept the people in there for the best part of the day. They were firing and picking them off for an entire day. So, the reality would have been probably more terrifying.

Jordan: The reason I did it really was because I wanted the scene to last 30 seconds. I also wanted the spectators and football pitch to treat the possibility of violence with incredulity at the start. So, when the thing breaks through, that little tin pot vehicle looks ridiculous. The player kicks a ball over the top of it and scores and the entire football ground bursts into laughter... The rhythm of that war that Collins fought was every action by the Volunteers would give rise to a grossly inflated reaction by the British forces. Whereupon Collins would have a wider ground and wider support and then strike in another way. The rhythm of the conflict was one of escalation and I just tried to mirror that in the presentation of that conflict in the film.

The differences between fact and fiction weremany, both in terms of the minutiae (there was no score in the match when British troops opened) and the major details (no tank drove onto the pitch, Mick Hogan was not killed after soloing a tank). As readers and listeners of The Bloodied Field and viewers of this week's Bloody Sunday documentary will know, what happened was far more chaotic. A 'cordon and search' operation was mounted around Croke Park that afternoon. British troops and police hoped to search patrons at the match. After arriving on the scene, the Black and Tans opened fire and twelve people were shot dead. A further two people were killed in an ensuing stampede. The Tipperary team were lined up against a wall by British troops, and might have been shot were it not for the intervention of Major E.L. Mills , commanding officer of the Auxiliary Division.

Reviewing the film in 1996, Michael Dwyer wrote in the Irish Times: 'Jordan’s riveting and superbly crafted film stands as the most important film made in or about Ireland in the first century of film'. In reimagining with Bloody Sunday and many other events in the life of its protagonist, Michael Collins took obvious liberties with facts. However Jordan did capture the indiscriminate nature of the violence that day. We are lucky that the events of Bloody Sunday have been reconstructed with such clear detail in recent years. In that scene shot in Bray, Neil Jordan does, in a different way, help us understand the shocking reality what happened 100 years ago today. 14 people went out to watch a match and never came home.

If you're looking for more information on the actual events of Bloody Sunday, we recommend watching the Bloody Sunday documentary aired on RTÉ this week or listen to Michael Foley's Bloodied Field podcast. Manny Man Does History offered its own take on Bloody Sunday this week, which may suit viewers with shorter attention spans. 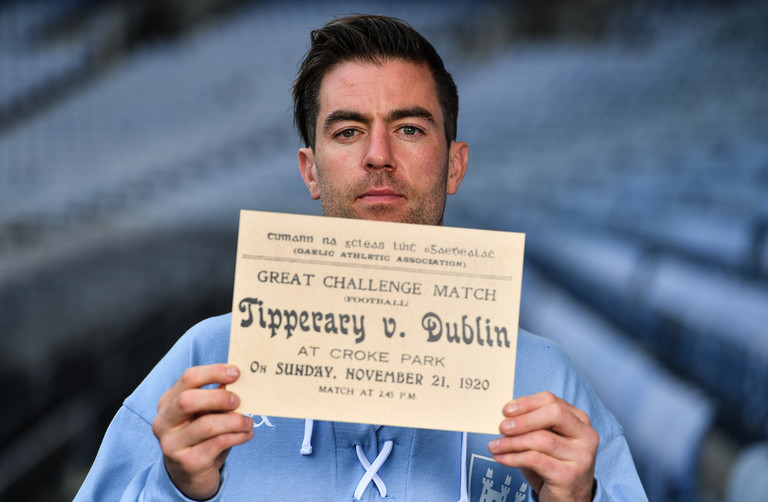