10 Great Sports Moments From The Wire

These are not ranked but in order of appearance on the show.

Omar has just robbed one of the west Baltimore crew's stash houses. As Avon shoots some hoops, he, Stringer and Wee-Bey discuss putting a bounty on the stick-up man's head. When the drug kingpin discovers that Omar is gay, the bounty triples.

At the end of the scene, Avon throws down a lob from Stringer.

2. McNulty and Bubbles go to a kids soccer match 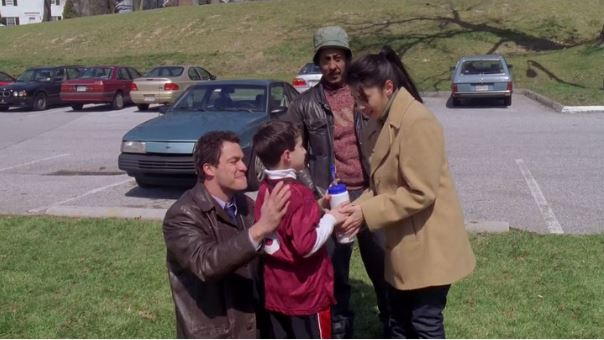 McNulty turns up to his son's soccer match with Bubbles in tow and his wife is not impressed. An argument over visitation rights follows.

Some sort of basketball-like rolling substitutions seem to be utilised as McNulty's kid runs off the pitch whenever he does something notable.

The MLS had clearly not entered the conscience of Baltimore's drug-using community as Bubbles asks McNulty, "Soc-what?".

Season one, episode seven - 'One Arrest' 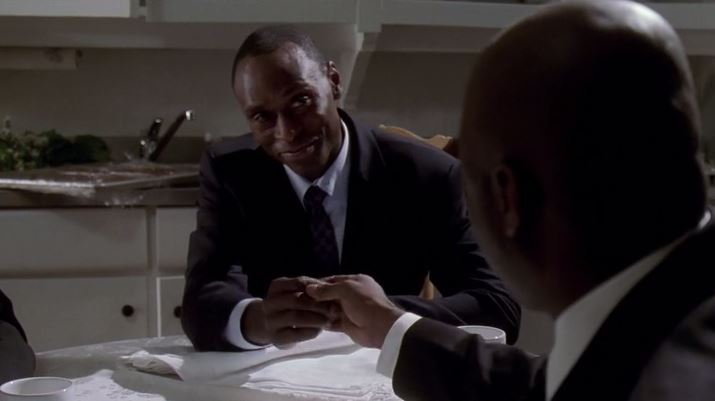 Daniels is dragged to a fundraiser by his wife and takes a seat in the kitchen with the drivers to watch a Baltimore Orioles game. Clay Davis's driver tells the Lieutenant how he'd go about robbing the house.

Davis' driver reveals that his name is Damien Price but that he mostly goes by 'Day Day' to which Daniels retorts:

Cedric Daniels, but I mostly go by Lieutenant. 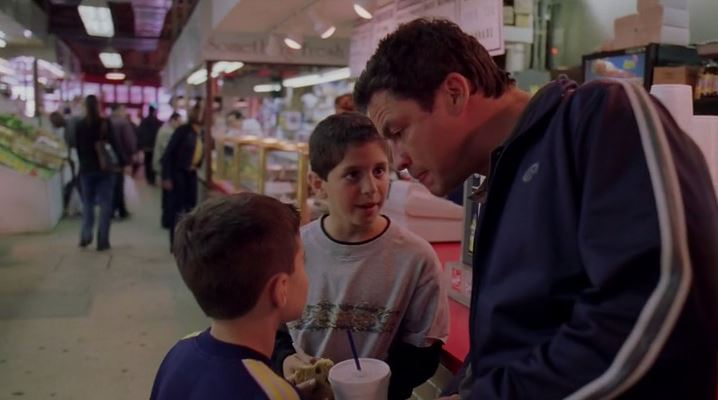 McNulty takes his kids to the market and quizzes them on the numbers of Baltimore Orioles players as they stroll around. He spots Stringer Bell buying some groceries and gets Sean and Mikey to follow Avon's number two.

The two kids get Stringer's licence plate number but McNulty ends up losing them in the process.

5. Avon and Stringer do some scouting 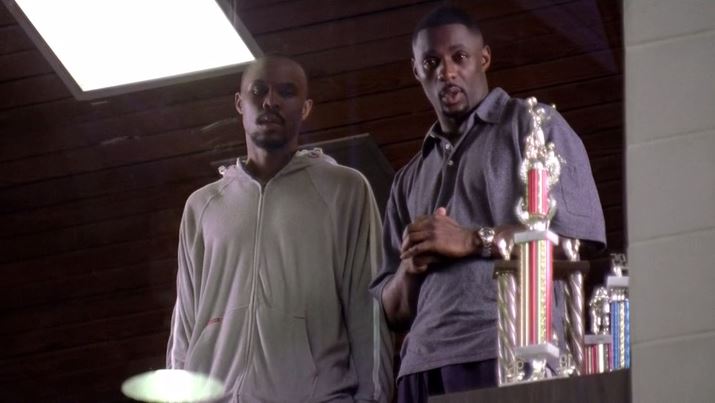 The big East vs West Baltimore game is coming up and the West have lost to Prop Joe for two consecutive years. Avon needs some edge and recruits a junior college player.

Hear that. Ain't no shit for free, right.

6. The East vs West game 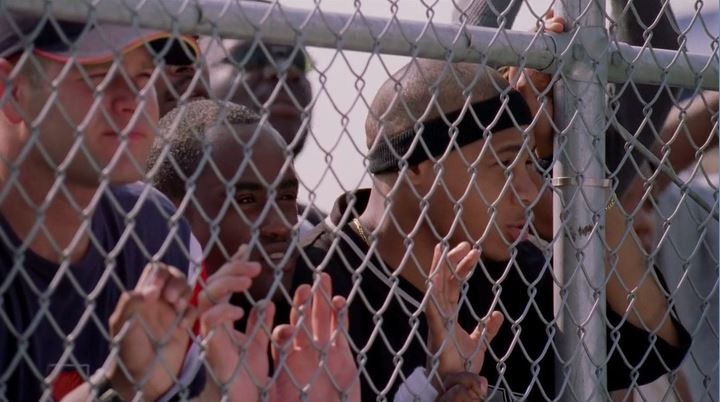 All's quiet in west Baltimore with no one on the corners. Carver and Herc have no idea why until they discover that it's because everyone is watching the East vs West game.

The West lead by 12 at the half and Avon isn't having Prop Joe's suit.

It's 85 degrees out here and you're trying to be like Pat Riley.

Joe gets Avon to double down on their bet and springs a ringer off the bench. The East win by four.

The Major Crimes unit also get their eyes on a real life Avon for the first time.

7. Bunk, McNulty and kids at an Orioles game 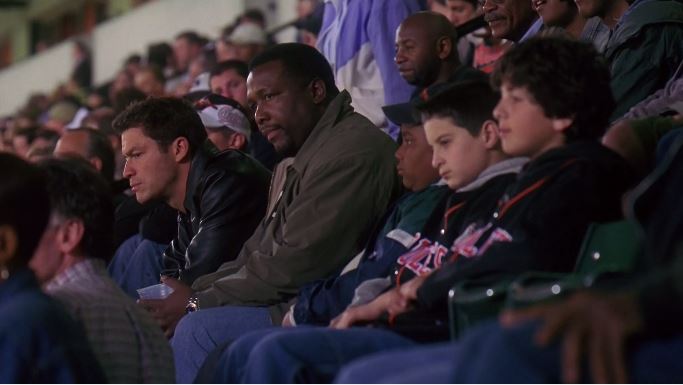 Bunk and McNulty take their kids to an Orioles game. McNulty's kids have come with his ex-wife and her friend Dennis, spending the first half of the game with them in their seats behind the batter.

For the remaining innings, they head up to the two detectives in their nosebleed seats. McNulty spends most of the game watching his ex-wife.

Bunk speculates that he might just be a friend but McNulty quips forlornly:

Herc spends the episode deliberating a 'what if'. The hypothetical situation is if he had to have sex with one guy so that he could have a night with the Olsen twins, who would it be?

Putting plenty of thought into it, he eventually makes his choice. He tells Carver that it would be former Orioles catcher Gus Triandos.

This is a hard one to understand. It has nothing to do with sex. It's about sympathy, it's about giving a guy a break.

Gus Triandos. He was a catcher with the Orioles back in the day. My brother had his card. Sorry looking motherfucker man. I mean he looked like this little kid that got left at a bus station by his parents.

You know why? Because he had to catch Hoyt Wilhelm's knuckleball for five fucking years. The worst gig in baseball. It was like trying to catch a greased pig with wings. He even told a reporter once, 'Wilhelm nearly ruined me'. 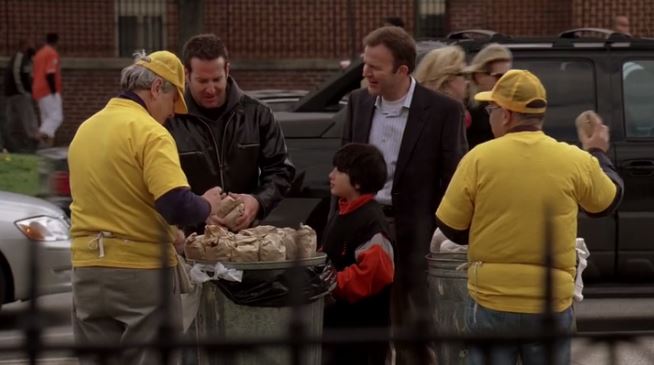 Baltimore Sun reporter Scott Templeton is tasked with doing a colour piece for the opening day of the baseball season. He turns up at an Orioles game but comes up empty, mostly meeting people who are disillusioned with the game. One guy tells him "fuck baseball".

Desperate, he invents a story about a kid in a wheelchair called Ejay who didn't have the money to buy a ticket from a scalper. 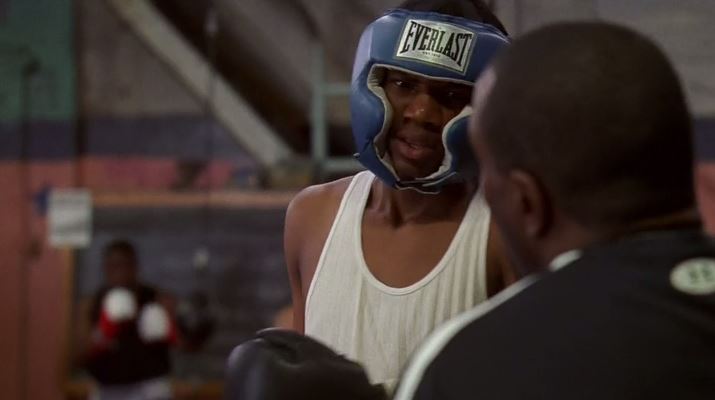 After getting beaten up by a much younger kid, Dukie presents himself at Cutty's gym for some self-defence lessons. The kid doesn't have much in terms of pugilistic skills or potential for it. Cutty tells him that even if he learns to fight and beats up one guy that it isn't like the movies where everyone is going to leave him alone.

The two also have this exchange about life in Baltimore.

Cutty: I guess what I'm tryin' to say is, not everything comes down to how you carry it in the street. I mean, it do come down to that if you gonna be in the street. But that ain't the only way to be.

Dukie: Round here it is.

Cutty: Yeah. Round here it is. World is bigger than that, at least, that's what they tell me.

Dukie: Like. how do you get from here to the rest of the world?

Cutty: I wish I knew.