Alongside Newgrange and Terry's Chocolate Orange, male friendship is up there with life's great mysteries.

Unlike the fairer sex, men struggle to communicate their emotions and as such, have invented the complex edifice of sport to express intense feelings like joy and sorrow. As such, friendship between males is often a little bit weird. It would be strange, and possibly wrong, for a man to tell another man how great or special they are, and the strong bonds between men as friends are rarely spoken of. They're just assumed, which is strange and probably unhealthy, when you really think of the emotional needs that we all have.

This week's enjoyable episode of the 'Tommy Hector & Laurita' podcast features a hilarious digression from Tommy Tiernan on the confusing nature of male friendship. During a conversation around people you'd love see again who you haven't seen in ages, Tommy discusses his once-strong-but-now-extinguished friendship with British actor-comedian Simon Pegg. Long before Pegg was in Hot Fuzz and Mission:Impossible, he was on the stand-up beat with Tiernan in the late 90s. The two comedians formed a really strong friendship during an intense period of touring over a short span of time.

We did a small bit of touring together in England and then we toured Australia and New Zealand together for two months in 1997. We became unbelievably close. It's very hard to find words to describe it. He said later on that was almost like a little love affair. Nothing physical, but just a kind of closeness. We were on the far side of the world. When I came back to this side of the world, he was living in Kentish Town... I used to go up and stay with him. This house was like a holding area for mystery tramps of the stand-up scene. It was fantastic.

And then, we just kind of...Simon went off and started doing Spaced, the sitcom, and I was doing stand-up, and we didn't see that much of each other. But there was a real closeness for about a year.

And I never saw too much of him after that.

The friendship all but ended. For Tiernan, the strangeness of their break-ups as friends came when he picked up Pegg's autobiography in a bookstore one day expecting just a mention, only to be let down by his old pal.

And then he brought out an autobiography. And I was there going, fuck, I must get a mention in this like. Because the friendship was so pure and deep and honest and good craic.

Not one [word], fuck, well I threw the book back into the pile and walked out of the shop going 'FUCK YOU! WELL FUCK YOU ANYWAY!'

It's a great story well told that perfectly captures the vagaries of male friendship. Great friends one day, forgotten about a few years later. It's deeply confusing.

Perhaps it's a generational thing. Tiernan tells the magical story of his father and an old friend on a camping trip recently in Athlone that would bring a tear to your eye and make you wonder where we've gone wrong as a society in the past 30 years.

Listen to whole podcast below. The lads also revealed this week they're launching a bonus podcast for subscribers - more info about that here. 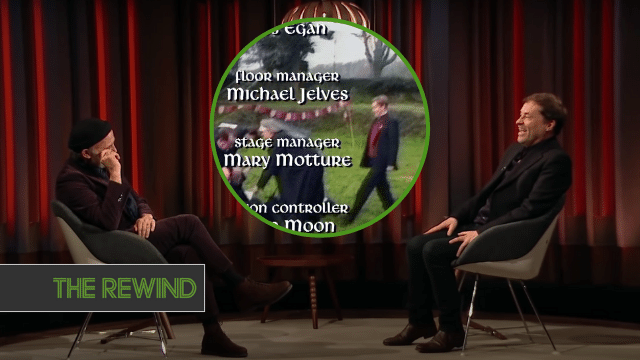