(Warning: this article includes some spoilers and some of internet theories.)

Last night's bonkers episode of Line of Duty featured an incredible ending. In fact, it wasn't even an ending because once those credits rolled, 90% of Ireland and Britain were pressing rewind on their remote controls to get a better look at the paperwork on the desk of Ted Hastings. After fifteen attempts at rewinding, most of us moved on, none the wiser.

To recap: analysis of the DNA on the burner phones found at the home of Farida Jatri had been completed. As had been expected, the DNA of Jo Davidson was found on the phones. But what wasn't expected - and thankfully the Line of Duty theme music was played under the dialogue here in an epic way to really accentuate the significance of the revelation - was that Davidson's DNA has a close match (think immediate family) with another figure well-known to Metropolitan police.

Here's what Arnott reveals, by the word:

As we know, sir, officer’ samples are stored on the system to exclude contamination of crime scenes. Now an officer’s DNA isn’t speculatively examined on a routine basis, and certainly wasn’t back when Davidson joined the force. Because the DNA deposits detected at the house weren’t assumed to relate solely to a police officer, they were compared against the whole system. The analysis detected partial matches to a nominal whose DNA is stored on other police databases. He’s identified over the page.”

The camera scans briefly over the file, showing a photograph in the paperwork. Hastings delivered an epic 'Mother of God' and fade to black.

So what do we know?

The photo in the file is Davidson.

Anyone who rewound enough times over the final minute of the show will have realised that it was a photo of Davidson in the file, not anyone else.

Rewinding to see who Jo Davidson is related to, turns out it's just a picture of her #MotherOfGod #LineOfDuty pic.twitter.com/cBQTT4kfim

We're talking about a man

Reddit user yellow52 summed everything nicely on a megathread this morning.

"His details are over the page"

The photo over the page is a female, looks very much like Jo

Assume it is just that, a photo of Jo herself

With that info to hand, we know the identity of that nominal will be a male relative of Davidson - likely a brother - who had been in other police databases -- presumably he was not a cop.

Who could it be?

The internet's lead suspect is Tommy Hunter. Tommy Hunter was a pedophile mobster in Seasons 1 and 2 who recruited Dot Cotton to work as his caddy.  Like Davidson, Hunter had a Scottish accent. That's the most direct link between the two.

Corbett and Dot have all been mentioned as other possible suspects, but the evidence seems to suggest that the mystery person was not a policeman.

We know Davidson has a shady relationship with her own family, and memorably flung a glass of wine at a family photo in the first episode of the series (although some people believe that same photo links Jo to Corbett's mother)

Mother of god. Kudos to who spotted this a couple of episodes ago. Joanne and John Corbett are siblings! #LineOfDuty pic.twitter.com/x1iY6nTKGj

It appears Jo's family ties will play an essential role in how this series plays out.  Unfortunately we'll have to wait until next Sunday to find out just who's name is in that file.

SEE ALSO: The Line Of Duty Theory That Chloe Is Gates's Daughter: Too Good To Be True? 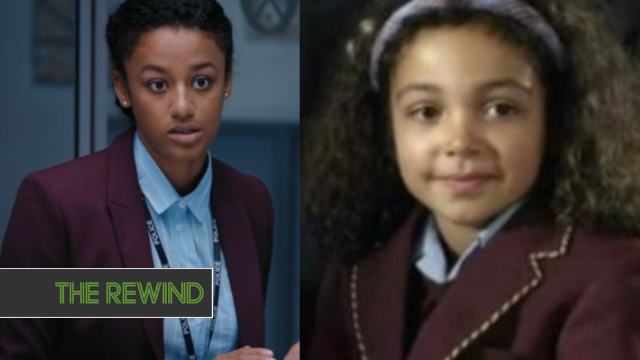