I wonder if the national obsession with Reeling in the Years would make sense to any non-Irish person. Given how much of it is sad news - especially the episodes focusing on the 1970s and '80s - it may initially seem hard to understand the hype or excitement around it when it drops every ten years.

But Reeling in the Years captures the national mood better than just about anything else in Irish culture - every episode is a perfect time capsule of years gone by, and the week-by-week release of the 2010s series earlier this year lightened the doom and gloom of lockdown significantly.

It's always intriguing to see what the RTÉ editors decide to omit or include in each episode, and we decided to take a look back at the year that was in 2021 and predict what might show up in Reeling in the Years 2021.

What to expect from Reeling in the Years 2021

We expect that the 2021 edition will be littered with coronavirus and lockdown snippets throughout, so we've decided to veer away from too much mention of that in our prediction.

One thing that the editors do love, however, is an ominous "little did we know" ending - we hope that it's not the case, but the rise of the Omicron variant could be a nasty ending when the series renews in 2030...

But let's deal with the opening first. Given its global significance, and its position right at the start of the year, it seems only natural that the show will likely open with the shocking January 6 riots on Capitol Hill. RTÉ love to match the soundtrack with the mood of the moment so, when looking through this year's hits, we think they may plump for 'Easy On Me' by Adele for the opening.

We wouldn't be surprised to see the melancholic mood kept up for a bit longer, perhaps with some scenes from the multiple protests in Dublin city over the year, or with some of the political controversies which surrounded Stephen Donnelly, Katherine Zappone, and others this year.

When the mood does inevitably shift up, we'll likely get some cult hero moments from the course of the year. Perhaps some of the antics from The Late Late Toy Show might show up here, or Frostbit Boy's heroic rescue from the Atlantic Ocean.

As we move through some of the more "fun" moments of 2021, we'd expect a lighter choice of music here as well. There are a few contenders here - you can take your pick from 'MONTERO' by Lil Nas X or 'Good 4 U' by Olivia Rodrigo here. RTÉ seldom stray from the holy trinity of chart toppers, Irish acts, or old favourites, and we wouldn't expect them to do so for Reeling In The Years 2021.

The loss of Fungie the Dolphin in 2020 was heartbreaking, but the multiple visits of Wally the Walrus were a highlight of 2021, and we'd expect him to make the cut.

Every year of Reeling in the Years comes with a healthy dose of Irish music, and there's a good bit to choose from for 2021. Both Dermot Kennedy and Hozier collaborated with dance act Meduza, with Kennedy's effort Paradise topping the charts in January.

Orla Gartland burst onto the charts with her first album Woman On The Internet, and there's a fair chance we might hear one of the songs from that album play during this episode. Dublin act Villagers have also been featured on Reeling In The Years in the past, and there's plenty from their new album Fever Dreams for the editors to choose from.

There's always a bit of celebrity gossip and news in RITY, and nothing in 2021 quite rivalled the romance between Kildare actor Paul Mescal and American singer Phoebe Bridgers, which saw Bridgers end the year in Ireland. If it wasn't for the fact that Bridgers' album Punisher was released in 2020, we'd nearly predict one of the songs from that to play at some stage.

One other major news story we can expect to see dealt with is the death of the Duke of Edinburgh, Prince Philip, in April - yes, that did happen in 2021. It's been a long year.

And, inevitably, there are the celebrations of the achievements of the Irish sporting world, and there's a great class to choose from in 2021.

The All-Ireland finals are always given fair airtime, but we'd expect that Mayo's sensational toppling of Dublin in the men's football semi-final may get almost as much attention, given the Dubs' stranglehold on the All-Ireland for nearly seven years.

It will likely be a case of what the editors choose to omit rather than what they include when it comes to the rest of the sporting achievements of 2021. It would be a massive surprise not to see all of our Olympic and Paralympic gold medalists celebrated, and the historic feats accomplished by Rachael Blackmore would also be hard to exclude.

The tricolour was hoisted to the strains of Amhrán na bhFiann at the Sea Forest Waterway in honour of Irish rowing gold medallists Fintan McCarthy and Paul O'Donovan. #olympics #tokyo2020 #RTESport

(A brief aside: RTÉ's Reeling in the Years editors are famed fans of Coldplay, Ed Sheeran, and U2. Regardless of their quality, expect to see one of Coldplay's 'Higher Power', Sheeran's 'Bad Habits' or U2's 'Your Song Saved My Life' to soundtrack the sporting section).

The Irish men's and women's national football teams had mixed fortunes in 2021, but the men's impressive results against Portugal and the women's huge win in Finland are the most likely moments to feature. We'd hazard a guess, though, that the FAI Cup final between Pats and Bohs may well get the nod ahead of the national teams.

And as for Ireland's win over the All Blacks? We'd imagine that that's fairly well certain to feature in some way in the 2021 episode.

If any world sporting events are to feature, the one that captured the public's attention the most in Ireland was most certainly the EURO 2020 final between England and Italy, on a day when everyone in Ireland became an honorary Italian. It's hard to see RTÉ excluding the penalty shoot out defeat for Gareth Southgate.

The agony and the ecstacy for Italy, as Jorginho misses but then Donnarumma wins it by saving Saka's penalty#EURO2020final #RTESoccer #ITAENG #ENG #ITA
📺Watch live - https://t.co/jyJ07G8sHQ
📱 Live Updates - https://t.co/GxytYsUr8n pic.twitter.com/Y3SRaOByqC

Our outside sporting bet is that the dramatic Formula 1 finale may well feature as another major world sporting event that captured the public's attention in Ireland - that is, if RTÉ can sort the rights to the footage from Sky.

There's also always a snippet or two from some of RTÉ's homegrown television on Reeling in the Years, and we'd suggest that Kin or some of Tommy Tiernan's best interviews of the year are most likely to feature.

So, there you go, that's our guess at how Reeling in the Years 2021 may look. We'll have to wait nine or so years to find out if we're right - and that's assuming that RTÉ keep the series going.

It's a staple of Irish culture, though, and we'd be heartbroken to see it onge

SEE ALSO: Why The Love/Hate Wedding Is The Greatest Scene In Irish TV History 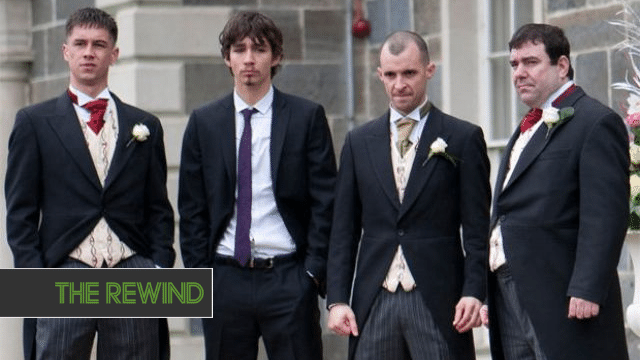