We can't be alone in our absolute delight at the fact ITV brought back Who Wants To Be A Millionaire and last night's series finale was certainly a doozy.

Firstly, let us talk about Charlie Lim. Poor Charlie.  The 24-year-old took the hotseat midway through the show and used all of his lifelines pretty much immediately. The £2,000 question, 'Which of these airlines was founded in Australia?' had him stumped and when discussing the various options, his analysis of 'Ryanair' amounted to: "Ryanair could be any other English speaking country, like the US, the UK or Australia."

Queue everyone on these shores screaming "IT'S IRISH!" at their televisions. This would not be the last time Charlie had us screaming at the TV.

He then used his remaining lifelines on the £4,000 question, which guaranteed he got it correct but also signed him up to a lifetime of slagging from Jeremy Clarkson. By £8,000 he was on his own but at this point he turned into an unstoppable force.

A Wild Stab In The Dark | Who Wants To Be A Millionaire?

A more apt quote from that Sudden Impact scene for Charlie would have been "You gotta ask yourself the question 'Do I feel lucky?' Well, do ye, punk!?" Because luck was certainly on his side.

Then came the £16,000 question. AKA the "IT'S CHRIST THE REDEEMER!" question. To be fair, he had a well-educated guess at that one.

Charlie finally got his comeuppance at the £32,000 question, which was arguably the easiest of the whole bloody lot! Although, being primarily a sports website, we would say that. 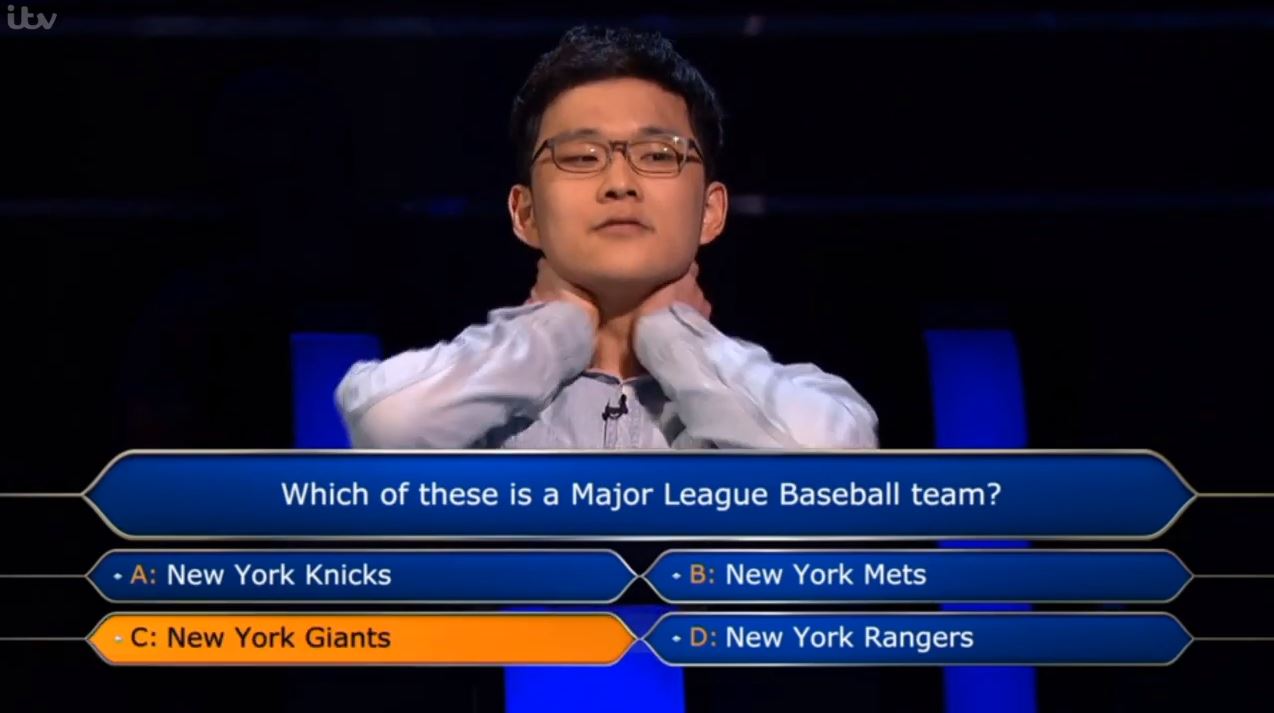 Off went Charlie with his cheque for £16,000 and in came Howell, a Welsh player who had all the airs of a man who knew his shit. Howell was not content with just giving the right answer, he often talked through the board, explaining why each of the other possible answers were wrong.

He stormed his way to £64,000 without much fuss before the klaxon rang out for the end of the show. However, with it being the last episode in the series, he couldn't come back next week so in a strange set-up, ITV decided they'd come back at 10pm to finish the game as they had a documentary about the Royals airing at 9pm that couldn't possibly be delayed (insert eye roll emoji here).

So back we all came at 10pm to see how far Howell could go. He had one lifeline remaining and for those of you who aren't familiar with the new format, it's a great one: Ask the host. i.e. Ask Jeremy Clarkson.

For the £125,000 question Howell was asked "Which is the lowest layer of the Earth's atmosphere?" He opted against asking Jeremy and instead took a punt on a distant school memory.

Then came the £250,000 question and he was back in flying form. When asked which Frenchman was present at the signing of The Treaty of Versailles in 1919, he detailed the roles each of the possible candidates played in history and told Jeremy who two of the other "Big Four" diplomats were before finally giving his answer "Georges Clemenceau." Correct, of course.

Two questions away from a million and one lifeline left. The tension was enormous.

The £500,000 question was revealed and it read: "As a boy, Alexander the Great was tutored by which of these philosophers? a) Thales b) Socrates c) Plato d) Aristotle."

For half a million pounds… Cue dramatic music… #WhoWantsToBeAMillionaire pic.twitter.com/m0vyLF32xe

Howell's head in hands gesture in the above GIF wasn't because he hadn't a clue, it was because he actually had a feeling it was Aristotle but was afraid to risk it. He decided to use his last lifeline and ask Jeremy but Clarkson hadn't a clue. Again Howell went through each possible answer and by process of elimination came to Aristotle. Understandably, he could not risk losing £186,000 on hunch and decided to take the money.

However, had he gone with Aristotle he would have been correct. Could he have won the £1m? We'll never know but he played one hell of a game!

Dammit. He even remembered where Miletus, home of Thales was. If only he had been a tiny bit braver, but fair play. #whowantstobeamillionaire #wwtbam

Howell is giving me a great history lesson tonight! #WhoWantsToBeAMillionaire

What an end to a brilliant series, Howell did fantastic @JeremyClarkson #WhoWantsToBeAMillionaire

The show will be back for another series in the new year.

The Rewind
3 days ago
By Mark Farrelly
Celtic Fans Will Love The Presenter Of The Australian 'Who Wants To Be A Millionaire?'
10

The Rewind
2 weeks ago
By Mark Farrelly
Quiz: Can You Answer These 'Phone A Friend' Questions?
17

The Rewind
2 months ago
By Balls Team
Watch: The Real Footage Of Charles Ingram's Infamous Millionaire Appearance
Previous Next

Who Wants To Be A Millionaire